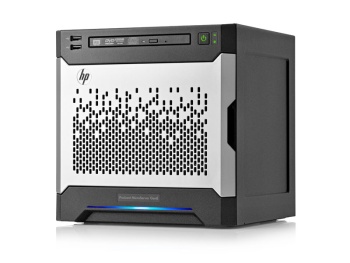 When we looked at the original HP Proliant MicroServer back in 2010, we said it would make a great first server for a small business. We feel much the same way about HP’s new Proliant MicroServer Gen8; it significantly improves upon its predecessor with great engineering touches and useful technology brought down from HP’s enterprise-class servers. Though to be fair, it also leaves us wanting in a couple of areas.

At 9 inches cubed, the MicroServer Gen 8 is not the smallest small server we’ve ever seen (the WD Sentinel DS6100 we recently reviewed would almost fit inside it). Still it’s small—and quiet—enough to live unobtrusively in your workspace rather than tucked away in an equipment room. The front of the MicroServer Gen8 reveals four SATA drive bays behind a silver plastic door with a sturdy magnetic latch. If you want to express your server’s sartorial side, you can buy replacement doors in red, blue, or black.

You’ll also find two USB 2.0 ports up front along with a large LED that glows blue, amber, or red depending on the status of the server.  At the rear of the MicroServer Gen8 you’ll find USB 2.0 ports, two USB 3.0 ports, a pair of Gigabit Ethernet ports, plus one more Ethernet port dedicated to the server’s iLO (Integrated Lights Out) remote management feature—more on this later.

Open up the case—which is easy to do without tools via two large thumbscrews—and you’ll see some thoughtful engineering touches, including a large but slowly-rotating (read: quiet) fan, and a lever that secures the hard drives in their bays (preferable to a conventional lock and key, the latter of which can be easily misplaced). 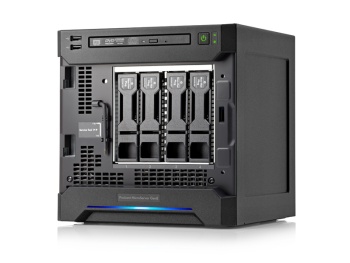 Figure 2: Four SATA drive bays support RAID 1 or 10, but not RAID 5. They’re not hot-pluggable, either.

Easy-to-access internal components include the single Gen 2 PCIe expansion slot and two DIMM sockets (the server can accommodate a maximum of 16 GB of RAM). Unlike the aforementioned Sentinel WS 6100, the MicroServer has but one power supply, and it’s internal to the server.

TWe like the MicroServer Gen8’s price tag, too. It’s available in three models which sell for $449, $529, and $929. The $449 entry-level unit we tested is a diskless model with 2 GB of RAM, a 2.3 GHz dual-core Celeron processor, no optical drive. The top-end $929 model includes that optical drive (a slim DVD-RW), 4GB of RAM, a slightly beefier 2.5 GHz Pentium CPU, and a copy of Windows Server 2012 Essentials, but still only includes a lone 1 TB hard drive. Suffice it to say that the MicroServer Gen8 is offered as a foundation to build upon and customize, not as an all-inclusive, “just add company” kind of server.

Keeping with the customization theme, the MicroServer Gen 8 is certified not just for Windows Server operating systems, but enterprise flavors of Red Hat and SUSE Linux, as well as VMWare ESXi. (In fact, the server’s motherboard offers internal MicroSD and USB ports to host the ESXi hypervisor so that you can dedicate main storage to virtual machines.)