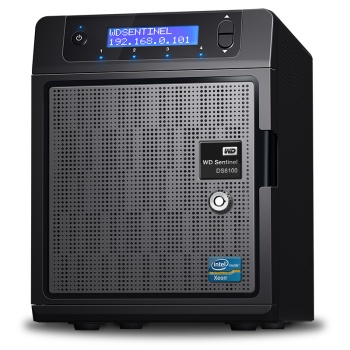 Virtually every small business would benefit from having a server, but countless small firms—say, those with one up to a couple dozen employees—do without one under the misguided impression that the benefits don’t justify the cost and effort it takes to buy, run, and maintain a server.

If that describes your company, you may want to take a close look at WD’s new Sentinel DS6100 small business server, which packs a full-featured Windows Server 2012 R2 Essentials operating system and gobs of redundant storage into a powerful and moderately-priced box that’s barely the size of a toaster.

Under the Hood: Server Hardware

On the front of the Sentinel DS6100, just below a two-line LCD status display, sit four hot-swappable drive bays accessible behind a locking door. On the back, you’ll find plenty of ports—four USB 3.0, two USB 2.0, and a pair of Gigabit Ethernet ports.  Actually there’s a third Ethernet port, which is currently inactive. WD says this will provide IPMI support (for remote control and monitoring of the serve—even if it’s turned off or the OS is not functioning properly) following a spring software update.

The DS6100 comes in three different storage capacities—8, 12, and 16 TB. We tested the midrange version ($3,960 MSRP), which sports four 3 TB 7200 RPM SATA hard drives. These drives are enterprise-class (read: high reliability) and hot-swappable, which means if a drive fails, you can pull it out and replace it without turning off the server. You can configure the storage (which supports iSCSI) via conventional RAID methods—0, 1, 5, and 10—or with Microsoft’s Storage Spaces feature, which creates virtual storage pools from two or more hard drives.

Unlike many other compact servers, the WS6100 uses a separate 2.5-inch boot drive for the OS so it doesn’t consume any of the main storage capacity. Actually, it has two of them, set up as RAID 1 for redundancy.

Hard drives and Ethernet ports aren’t the Sentinel DS6100’s only redundant features. It also comes with two power supplies to keep the server running in case one goes south. The power supplies are external bricks rather than internal units, which facilitates easy replacement in the event of a failure.

You’d think a server that measures a mere 8- x 9- x 6-inches might come up short when it comes to hardware features like CPU, RAM, and connectivity, but the Sentinel  DS6100 doesn’t skimp in these areas. Its CPU is an Intel Xeon 2.5 GHz quad-core, backed up by 16 GB of RAM. Better yet, the presence of two open slots let you expand the DS6100 to 32 GB without chucking any of the existing RAM.

Incidentally, the Sentinel DS6100’s less expensive sibling, the DS5100, comes in 4 and 8 TB versions. Although the two models share many similarities, the DS5100 makes do with a slightly slower dual-core Xeon CPU, less included RAM, a single boot drive instead of a mirrored pair, and only one power supply (although it supports two).

The Sentinel WS6100 ships with Windows Server 2012 R2 Essentials, which is pre-installed on the server and supports a maximum of 25 users or 50 devices. Unlike other versions of Windows Server, you don’t need to buy an access license for each connected user or device. 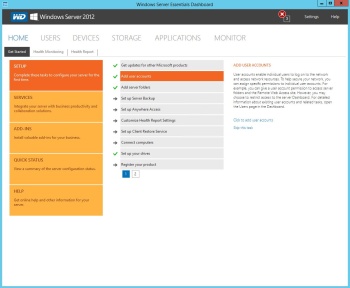 There’s also integration with a number of Microsoft cloud services; from the Windows Server 2012 R2 Essentials Administrative Dashboard, you can manage Office 365 accounts and keep server and service passwords in sync, or link to a hosted Exchange email provider so that newly-created user accounts on the server automatically spawn a corresponding mailbox. The server can also supplement its own backups with cloud-based backups via Windows Azure (those backups cost extra).