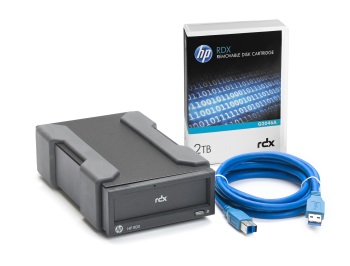 Every small business should back up its data regularly, yet too many don’t do it often enough—or in some cases, at all—largely because of the considerable time and effort that’s typically involved. That’s why the best small business data backup products protect the maximum amount of data with minimal hassle. By that standard, HP’s RDX 2 TB USB 3.0 Removable Disk Backup System ($700) fills the bill (with a slight catch, but more on that later).

We tested an external USB 3.0 kit with a drive and, as the product name indicates, a 2 TB cartridge, which retails for around $700. The kit is also available as an internal drive, which costs about the same (and also uses USB 3.0–rather than SATA—as an interface).

Speaking of RDX cartridges, 2 TB is currently the highest capacity offered—a limitation of the 2.5-inch hard drives upon which the cartridges are based—but larger-capacity cartridges are on the horizon. There’s no definitive timeframe for that yet, but future RDX cartridges will be compatible with today’s RDX drives.

You can buy lower-capacity cartridges too. HP offers them in 1 TB, 500 GB, and 320 GB. Estimated prices for these (cartridges only) $273, $201, and $164, respectively, while the 2 TB cartridge sells for a whopping $540. Incidentally, other vendors—including Imation and Tandberg Data—sell RDX cartridges (and drives, for that matter). You can also find RDX cartridges that use SSD rather than magnetic storage.

As for durability, HP says the RDX cartridges, which measure 0.92- x 3.39- x 4.68-inches (HWD) and weigh 8 ounces or less, are rugged enough to handle a drop of about three feet onto a hard (tile over concrete) floor. We dropped the cartridge repeatedly onto a tile over concrete floor, and we were still able to use the cartridge afterward without any problems.

Backup hardware can’t do much without companion software, so HP includes a backup and restore utility called Continuous Data Protection (CDP), which supports any version of Windows from Windows Server 2012 back through Windows Vista.

We first installed the RDX drive and CDP software on a system running Windows 7 Professional, and immediately noticed that CDP presents a very minimalist user interface (almost disturbingly so for an IT person accustomed to having myriad settings to configure). Indeed, CDP offers virtually nothing to configure, but that’s kind of the point, given that it’s designed for the non-techie. After all, something that can be configured can presumably be misconfigured. 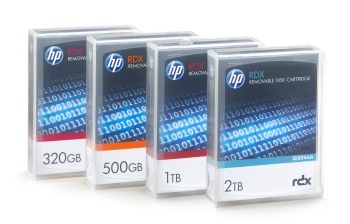 RDX cartridges come in capacities up to 2 TB, though HP plans to release larger capacities in the future.

Upon inserting the cartridge, a pop-up window prompted us to name the cartridge and confirm that we wanted to use it to back up the system.  After that, the RDX and CDP combo was off to the races, backing up the system’s nearly full 1 TB hard drive. After the initial backup, CDP backs up new or changed files continuously (hence the name), and the CDP software DVD serves as a boot disc that you can use to start the system in order to perform a bare metal restore (i.e. restoring onto a completely blank hard drive, as opposed to one that already has an operating system installed.)

Normally we would simulate a drive failure in order to test a product’s restore capability, but as good (or bad) luck would have it, that aforementioned 1 TB drive suffered a catastrophic failure a couple of days into testing. We installed the RDX driver and CDP software onto another Windows 7 system in order to access the cartridge contents and retrieve some critical files (you can browse the folder structure of your backed up system), and then, after replacing the bad hard drive, booted the system with the CDP DVD.

Following a brief interaction with a wizard, we restored the system using the most recent backup (you can choose older ones as well), and several hours later the system was back up and running as if nothing had gone wrong.

We mentioned a catch at the top of the article, and here it is. Although we had no problems running the CDP software on a Windows 7 system, when we installed it on a pair of Windows 8.1 systems and a Windows 2012 server, it would not recognize a loaded data cartridge, even though the operating system knew it was there and even assigned it a drive letter in Windows Explorer.

After a number of back-and-forth sessions with HP technical support, they attributed the problem to compatibility issues with Windows 8.1 and with the GPT-partitioned hard drives in our 2012 server. HP provided us with a pre-release updated version of the software, and our problems went away.

Once HP makes the new software available to the public (and as of this writing, they do not yet have a release  date), you’ll be able to chuck the included CDP software disc and download the latest version from the RDX support page.

Aside from the speed bump we encountered with our Windows 8 and 2012 systems, the HP RDX 2 TB USB 3.0 Removable Disk Backup System did its job thoroughly, reliably, and simply; you can’t ask for more than that from a backup. And although the product is quite costly—you can get a conventional 2 TB USB 3.0 hard drive for less than $100 or a whopping 6 GB one for less than $300—the HP’s combination of durability, reliability, and simplicity help justify the price tag. After all, the cost of having a reliable backup is eclipsed by the cost of not having one.

If you’re still using DAT tape for backup, you should really have your head examined (or at least cleaned—seriously, check on that). Even if you’re not, to keep your data protected with minimal effort, you should consider the HP RDX 2 TB USB 3.0 Removable Disk Backup System.