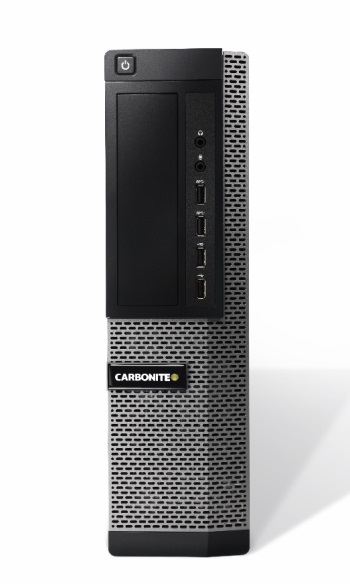 Small businesses generally have two options for backing up data—local and cloud. The former (backing up to a storage device located on company premises) will usually get you out of a run-of-the-mill jam such as a hardware failure or malware infection. Cloud backup lacks the convenience and immediacy of a local backup, but—in the event of a true calamity, such as a fire or flood, that could claim your local backup as a casualty—it could be the difference between getting your business back up and running or not.

Hybrid backup (local plus cloud) represents the best of both worlds, and that’s what Carbonite—a company that’s almost synonymous with cloud backup—aims to deliver with its HT10 appliance. In essence, the Carbonite Appliance HT10 backs data up to its own internal storage, and then backs up your backups by uploading them to Carbonite’s servers in the cloud.

The upshot of this is that the reseller handles the delivery, installation, technical support, billing, and so forth for the HT10, so as the customer you will always interact with the reseller rather than with Carbonite.

The Carbonite Appliance HT10 looks like a Dell Optiplex desktop PC, but it actually runs the Ubuntu operating system, and it’s designed to back up your data both to itself and to the cloud.

The aforementioned prices are Manufacturers Suggested Retail Prices, which means that Carbonite partners are free to determine final pricing—e.g., they may mark it up, particularly if they bundle it with other services. Bottom line, check with multiple partners to compare pricing, support responsiveness, etc., before you buy. Of note, Tech Data offers the Carbonite Appliance HT10 on a $100 monthly plan, which might be of interest to people who don’t like the prepaid commitment of annual subscriptions.

Looking at the Carbonite Appliance HT10, you’d swear it was a Dell OptiPlex desktop laying low in the Witness Protection Program (it’s clearly recognizable but for the lack of an obvious Dell logo on the front). Dell actually manufactures the hardware, though it runs Ubuntu operating system (OS) and its specs (a Celeron 1.9 GHz CPU and 4 GB of RAM) are appropriate for that OS—as well as its singular mission of data backup. 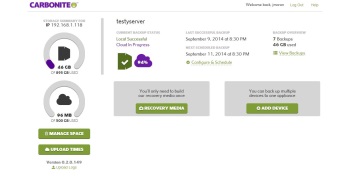 The HT10’s dashboard shows at a glance how many backups have been performed and how much local and cloud storage space is in use.

The Carbonite Appliance HT10 backs up Windows systems only—no Mac or Linux support yet—and supports Windows 2012, 2008, or 2003 server, as well as all desktop versions from Windows 8 back through Windows XP SP3. (But you’re not running XP anymore, right?) This is a good time to mention that the Carbonite Appliance HT10 doesn’t limit you to backing up one server or computer. You can back up as many servers or desktops as you care to, subject to the amount of storage you have available.

Speaking of available storage, although you can bump up your cloud storage in 100 GB increments at an extra cost, there’s no option to expand the local storage beyond 1 TB. Carbonite plans additional models with more storage, and since the Carbonite Appliance HT10 stores backups compressed, you could very well wring a bit more out of the 1 TB subject to how compressible your data is (documents/spreadsheets: very; but pictures: hardly).

Carbonite Appliance HT10: The Set Up

Getting the Carbonite Appliance HT10 up and running was not difficult. The first step: connect it to the network and power it up. (There’s no need to connect a monitor, keyboard or mouse, as you interact with the device over the network via a browser-based console.) Then you install the Carbonite Continuity Agent (CCA), which is conveniently preloaded onto an included USB Flash drive, on the system(s) you want to back up.

The CCA software locates the Carbonite Appliance HT10 on the network, and then it asks you to specify what which drives you want to backup, and how often. Once a daily is as often as you can backup your data on the HT10—an option to backup twice daily would be welcome—but you can also choose to backup weekly or monthly (though we’re not sure why anyone would want to). The CCA also gives you the option to upload backups to the cloud only during certain hours, so that activity doesn’t leech your Internet bandwidth while you’re open for business.