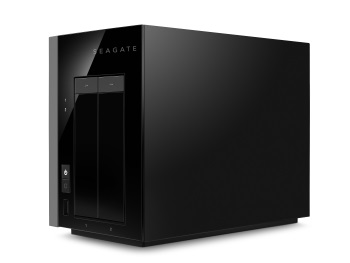 Seagate has launched WSS NAS, a new line of small business network-attached storage (NAS) systems for up to 50 people that integrates with Microsoft’s cloud storage and productivity software ecosystem. Small companies that have standardized on Windows and Office 365 can now centrally manage, mobilize and protect their files, while capitalizing on Microsoft’s investments in enterprise-grade, cloud-based services.

There is no shortage of small business NAS solutions on the market, according to Patrick Ferguson, product marketing manager for Seagate Cloud Systems and Solutions. Buyers today don’t even have to engage with traditional small business sales channels to acquire NAS hardware.

“They don’t have to go through VARs [value-added resellers] anymore,” Ferguson told Small Business Computing. “You can buy a NAS on Amazon now.”

On the surface, it’s a win for do-it-yourself types, but customers often—and quickly—find that the NAS they plucked off the shelf falls short of their file storage and sharing needs.

“Linux dominates this market,” said Ferguson. Granted, vendors have done an admirable job of putting a user-friendly face on the Linux software that runs entry-level NAS systems (Note: Seagate also builds Linux-based NAS systems). Many buyers soon learn that getting them to work seamlessly with their Windows environments takes some IT expertise, a discipline that’s in short supply at the local mom-and-pop shop.

From the start, Seagate WSS NAS systems, which are available in 2-, 4- and 6-bay variations, make it easy for the average user to get remotely-accessible file services up and running, said Ferguson. Upon start-up, WSS initially boots from on-board flash storage, streamlining the setup process for buyers that opt for the drive-less models (WSS is then loaded to a drive once installed).

For example, IT novices no longer have to worry about the head-spinning process of setting up RAID (redundant array of independent disks) levels to help safeguard their data against drive failures and improve performance. “You don’t have to know about RAID,” said Ferguson. Instead, Microsoft uses a technology called Storage Spaces that pools disk capacity and automatically protects files against mishaps in the background with minimal IT intervention.

These high-performance hard disk drives (HDDs), which borrow hardware features from Seagate’s line of Enterprise NAS HDDs, have a mean time between failure rating of more than 1 million hours; that’s more than 114 years. The hardware also supports the company’s Enterprise NAS HDDs, now available in capacities up to 6 terabytes (TB). To help small businesses make the most out of their storage, space-saving data deduplication technology is built-in.

Businesses that rely on Microsoft’s cloud-based Office 365 productivity platform can now add local storage to the mix. Linking their accounts to the device provides a single-sign-on experience, allowing them to access Office content locally or remotely, without juggling multiple usernames and passwords.

The device sports a tool-less design, which comes in handy for changing out the hot-swappable drives. It’s powered by a dual-core Intel Atom processor that runs at 1.7 Ghz (2.0 in Turbo Boost mode), giving the NAS enough horse power to not only provide the aforementioned file services, but also virtual private network (VPN) capabilities the ability to act as a domain controller, a stepping stone to larger networks. Buyers can “use this product as the first server in a business,” said Ferguson.