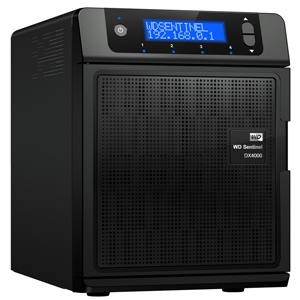 The lifeblood of any small business is its data, and how well a company accesses, manages and protects that data can go a long way toward determining the company’s success or failure.  For small firms that want to minimize the costs and hassle associated with data storage, a compact and relatively inexpensive network attached storage (NAS) device is typically the way to go, and there’s no shortage of products from which to choose.

Western Digital’s new WD Sentinel DX4000 enters the crowded small business NAS market with a number of useful features you don’t typically see in similarly-priced products, but it suffers from a couple of noteworthy weaknesses as well.

The Sentinel DX4000 is a four-bay device available in two versions: a $949 4 TB model (with two 2 TB drives) and a maxed-out 8 TB version (with four 2 TB drives) for $1,499. Whereas most NAS products in this segment employ a customized Linux variant as an underlying operating system, the Sentinel DX4000 has Microsoft’s Windows Storage Server 2008 R2 Essentials (WSS) under the hood.

The WD Sentinel DX4000 comes housed in a black metal and plastic chassis. Atop the drive bay access door on the front of the unit sits a backlit two-line LCD status display, and around back are a pair of Gigabit Ethernet ports plus a pair of USB 3.0 ports for external storage. The DX4000 also sports dual AC power connectors; this gives the unit redundant power supply capabilities, a feature typically found only in pricey enterprise-level hardware. The rub is that WD only includes one power brick in the box; buying the second will set you back an extra $60.

Either Windows (7/Vista/XP) or Mac computers can connect to the Sentinel DX4000. (We tested with Windows 7 and Vista systems.) The product supports a maximum of 25 user accounts — a WSS limit — and it doesn’t require a Client Access License (CAL) for each user or system that connects to the server.

When we first our removed our 4 TB test unit from its packaging, a distinct rattling sound suggested something was loose inside the chassis. But a closer inspection revealed a fairly benign culprit: a bit of movement in the metal rails of the two empty drive bays.

As soon as we plugged in the DX4000 (i.e. before we had pressed the power switch) the unit’s internal fan came loudly to life, and the racket continued until we had completed the server configuration, at which time the noise settled to a subtle hum. As we discovered later, however, powering down the storage server brings the fan noise back to full-bore until you pull the plug on the unit.

A few minutes after turning on the Sentinel DX4000, the server’s LCD status screen was reporting its IP address, indicating it was ready to be configured via Web browser. This initial setup process consists of a simple wizard to configure basic settings such as a server name, date and time, and an administrator password.

After setting up the server, you connect your various computers to it in similar fashion — by pointing their Web browsers to the server’s IP in order to install a piece of client software. The process, however, isn’t without issues.

For starters, the server can only handle one computer installation at a time, so forget about trying to save time by setting up a bunch of them concurrently. Also, it’s important that the client computers be current on all operating system updates; otherwise installs tend to fail. Upon ensuring the systems were up-to-date, our installs went pretty smoothly.

Once you connect a computer to the Sentinel DX4000, it gets a Launchpad utility from which a user can access shared folders, backup his computer, or use launch a browser to access the server’s Remote Web Access feature (more on this later).