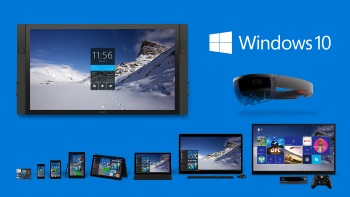 This week at Microsoft’s Build conference in San Francisco, the company unveiled ambitious goals for its upcoming Windows 10 operating system (OS). Not only does Microsoft hope to get the OS installed on a billion devices by mid-2018, the company is courting app developers of rival mobile platforms, namely iOS and Android, in a bid to enhance Windows 10’s mobile mojo.

While aimed at developers, Microsoft’s announcements during the event foreshadow what businesses can expect from the OS when it’s released later this year. Let’s explore some of the Windows 10 features that may have the biggest impact on your small business.

People who are reluctant to make the jump from Windows 7 after Windows 8’s mixed reception will find a lot to like about Windows 10. Better yet, it won’t cost them a dime. Terry Myerson, head of Microsoft’s operating systems group, said in a statement that his company will “deliver Windows 10 with a free upgrade offer, making it easy for customers and businesses to upgrade quickly.”

The new policy is worldwide, and even extends to systems running pirated copies of Windows—not that you have any of those in your PC fleet. On a practical level, it’s one less expense for which small businesses have to budget, which always a good thing.

Love it or hate it, Internet Explorer (IE) is about to leave the building.

The new default Web browser for Windows 10 is called Microsoft Edge (formerly Project Spartan). Microsoft claims that the new browser “just works” with modern Web applications and sites—welcome news for both users and Web developers. “Microsoft Edge is a browser built for doing,” said Myerson, with built-in note taking and sharing; a reading pane for no distractions; and integration with Cortana,” the company’s answer to the Apple Siri and Google Now digital assistants.

Stuck with legacy Web applications? IE11, along with its backward-compatible Enterprise Mode, will remain available.

How do you evaluate and obtain your Windows software today?

Chances are that you run a search for your requirements; narrow down your choices; download an installer or two; and cross your fingers that it doesn’t cause conflicts or set off your anti-virus software. The process is a far cry from the frictionless user experiences provided by Apple’s App Store and the Google Play app marketplace.

In an April 29 announcement, Myerson discussed a revamped Windows Store that may finally bring the ease of getting software from a mobile app store to Windows PCs, along with more payment options. “For end-users, apps in the Windows Store will install and uninstall easily, and the Store will support a range of global payment methods on all Windows devices,” including carrier billing. Carrier billing essentially adds the cost of purchased software to the cell phone bill of participating providers.

Of course, letting employees call all the shots is a sure-fire way to throw your IT environment into disarray. Microsoft thought of that, too. “For businesses, the Windows Store enables admins to highlight apps for their employees, distribute select apps from the Windows Store and private line-of-business apps to their employees, and use business payment methods like purchase orders,” Myerson added.

What about the thousands of Windows developers who make their wares available online? Worry not; Microsoft isn’t showing signs that it’s locking down the Windows software ecosystem any time soon.

And speaking of software…

Although not a Windows feature in and of itself, Microsoft unveiled new developer tools that may pave the way for a more complete app catalog.

As it stands today, iOS and Android lead the mobile software race with Windows trailing a distant third. And while many popular apps are available for Windows, they often fall short on delivering the same experience.

That may change after this year’s Build conference. The company announced new software development kits (SDKs) that lets developers port iOS and Android code to Windows, with few modifications.

Microsoft calls this a big deal. “The SDKs will allow developers take their existing Android or iOS code, quickly turn it into a Windows Universal app and make their apps available to users at the Windows Store,” according to a company release.

Have a favorite iOS or Android app? There’s a good chance that Windows 10 will soon have a version as full-featured as you’ll find for your iPad or Android smartphone.