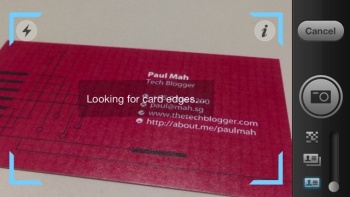 If you network or need to keep track of who you meet, then go download this app to your smartphone or tablet right now. CamCard makes quick work of business card data entry and helps to eliminate business card clutter

The app uses the built-in camera on your smartphone or tablet to snap a photo of the business card, and it uses optical character recognition (OCR) technology to identify and populate the relevant fields in your contacts list.

How to Use CamCard

Scanning a business card entails clicking on the “Take Photo” button from the main menu of the app. This takes control of the iPhone’s built-in camera and places a bracket on the display to help you properly frame the business card. The bracket blinks green when the business card is positioned correctly. The app the automatically activates the camera’s autofocus and takes the photo.

Figure 1: When positioned correctly, CamCard takes a photo of a business card and processes the information automatically.

CamCard handles the appropriate image rotation and auto-crop after it takes the photo, and it then performs an OCR scan to populate the pertinent fields of a data entry form. You can then verify the scanned data and edit any errors.

One nifty feature: CamCard lets you merge the currently captured data with an existing contact. This is useful for business cards that contain information on both the front and the back. Simply capture the side with the name of the person as usual, followed by the reverse side. When processing the reverse side, tap on “Merge Contacts” at the bottom of the data entry form, and select the first record that you created to merge the data.

Alternatively, an “Add Backside Image” option lets you capture a snapshot of the reverse side without processing it for relevant data. This lets you retain a record of a double-sided business card with the CamCard app, always a good idea if you intend to discard the original business card. The app saves all scans, and you can synchronize them or back them up to the cloud with the free cloud feature (more on that later).

We saved our scanned contact details to an Exchange contact list. This automatically updates all the contact information from CamCard into Outlook on the desktop, as well as to other devices connected to the Exchange Server. This is a great feature for small businesses that use a messaging server, such as Exchange.

You really need proper lighting to obtain a better photo of business cards and for a good OCR read. This is trickier than it sounds, given how a business card’s material, finish and even the printing process could reflect light at a bad angle. Moreover, the position of your smartphone or tablet can create shadows that reduce the accuracy of the OCR engine.

Fortunately, activating the camera light greatly reduces this issue. Tapping on the light icon on the capture screen triggers the LED light, which deactivates once the app captures the current business card. In general, CamCard’s speed makes it much faster to rescan a poorly captured business card than to correct the information manually.

The app also offers cloud storage and synchronization capability, so you can upload scanned cards to into a free, online CamCard account. This optional feature lets you access your scanned business card data by logging into the CamCard online portal, or from another CamCard app on a supported device. 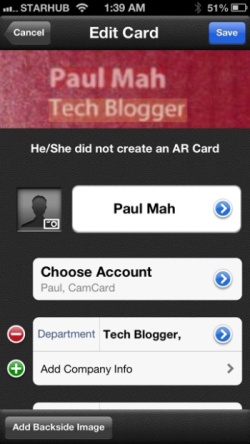 Figure 2: The original image of the business card appears in the top quarter of this screen; tapping on the data fields zooms the relevant portion to the front.

CamCard also saves the business cards snapshots, which means that you can discard business cards immediately after scanning them—perhaps even prior to leaving a conference or convention. We tested the feature using CamCard’s iPad version, and we were able to download and access the same business cards that we captured using the iPhone.

While CamCard’s OCR capability is surprisingly accurate, it is far from perfect. Highly stylized fonts, unexpected spacing in contact details, as well as italic text can throw off the OCR engine. The italics surprised us, and may be an area for further improvement.

While the OCR engine is quite good, including a built-in dictionary of common terms and work titles would increase its accuracy. CamCard excels at capturing contact numbers correctly though; numbers were hardly ever wrong.

Other issues have more to do with the non-standard business cards than with CamCard’s shortcomings. One annoying example: business cards with information consisting entirely of capital letters. CamCard automatically adjusted names so that they don’t show up as all caps, but it didn’t do that with fields such as the address.

A mature and well-designed piece of software, CamCard’s seamless cloud integration and excellent online portal make it a must-have for business travelers or for those who meet a lot of people in their line of work. CamCard costs $2.99 for the iPhone version. You can download it for free at the iOS App Store and at the Android Play Store.