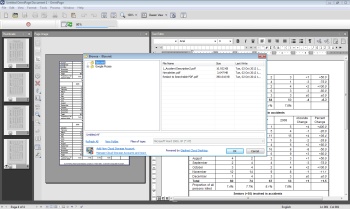 OmniPage Ultimate is a well-known small business software application from Nuance that converts documents, PDF files and even digital camera images into electronic files that you can edit, search and send to co-workers, clients and customers. OmniPage maintains the original formatting while its OCR (optical character recognition) engine delivers text in editable form.

The software lets you quickly capture text from brochures or photos without having to retype the copy, or you can make changes to documents even if you don’t have an editable source file. Scan lengthy paper documents, and OmniPage makes the converted text easily searchable.

More advanced features include the capability to perform batch processing by pulling images from network scanners or cloud locations, and collecting data from paper forms and exporting it into a spreadsheet or database.

According to Nuance, the latest version, OmniPage Ultimate 19, is specifically targeted at small and mid-sized businesses. We take a closer look at the latest version of the OCR software to determine its utility. Due to the product’s sheer breadth, we focus on its core capabilities and what they can do for small business.

OmniPage Ultimate works on systems with Windows 8, Windows 7 or Windows XP with Service Pack 3 installed. In addition, the software supports Windows Server 2008 R2 and Windows Server 2012 businesses that intend to use its batch-processing capabilities.

The software requires a computer with a 1GHz Intel Pentium processor or faster, and Nuance specifies a minimum of 1GB of RAM, though you’ll be better off with 2GB. A standard installation takes up 2.7GB of hard disk space after factoring in the various components in the product suite.

We installed and tested OmniPage on a fairly fast Windows 7 laptop. The overall installation procedure was uneventful, and we added Nuance PDF as well as Nuance Cloud Connector on top of the OmniPage Ultimate application. The setup wizard only prompts for the registration code towards the end of the installation process.

Before OmniPage can work its magic, it must first capture data from an input source. The depth of the product is evident based on the many input options available, which range from common image formats, scanners and cloud locations. You can capture images from a digital camera or import an existing image file, and the software supports scanners with WAI, TWAIN or ISIS drivers. On the cloud storage front, OmniPage will load files from Dropbox, Evernote, SharePoint and the Nuance Cloud Connector.

A slick new feature, Nuance Cloud Connector maps cloud storage to a local drive letter. This lets you access your cloud storage like a local drive without having to learn a new interface or method of working. The comprehensive, business-grade feature provides explicit support for Amazon S3, Box.com, EMC Atmos Online, Google Docs, Windows Azure Blob Storage, Live SkyDrive and standard FTP servers, among others. You need to provide login credentials for cloud storage locations, though the setup process is straightforward.

Overall, we were impressed with the support Nuance Cloud Connector provides. The product is clearly not an afterthought, and delivers highly compelling value to businesses that have incorporated, or want to incorporate, cloud storage into their workflow.

OmniPage has expanded its support for the ePub format which, while not new, lets you export processed documents to eBook readers such as the Apple iPad, Android tablets, Nook and Kobo, among others. In addition, by incorporating Nuance’s speech capabilities, OmniPage can output natural speech, too. You can choose from several different voices, although the software generates only MP3 audio files at the moment.