How to Print from an iPhone, iPad or Android Device 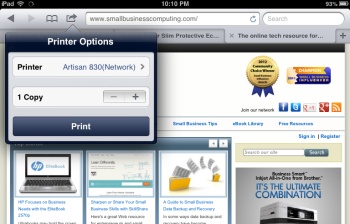 Once you meet AirPrint’s prerequisites, it’s pretty much a breeze to use. Unlike some of the mobile printing technologies we’ll cover next, you don’t have to explicitly enable AirPrint on the printer or download any special apps to your mobile device.

All the built-in iOS apps that allow printing (Mail, Photos, Safari, and iBooks) support AirPrint — as do many third-party apps. From within an app, just tap the print button and you should see your AirPrint printer listed. If your AirPrint-compatible printer isn’t detected, check if there’s updated firmware available, because some models received the AirPrint feature via firmware update after they originally went on sale.

Google’s Android operating system doesn’t yet offer an integrated printing technology analogous to AirPlay, but one way you can print from an Android-based smartphone or tablet is via Google’s Cloud Print service. 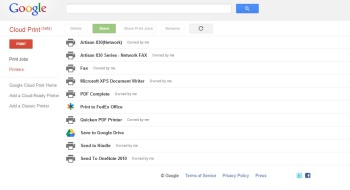 Figure 2: You can remotely print from an Android smartphone or tablet to a far-flung printer with Google Cloud Print. And it works with any printer that’s connected to a PC running the Chrome browser.

Google Cloud Print differs from AirPrint in a couple of important ways. First, with Cloud Print you don’t necessarily have to be on the same network as the printer you want to print to; it’s Web-based, so your target printer can be located almost anywhere as long as it has an Internet connection.

Second, although some printers (not too many, as it happens) have native support for Google Cloud Print, it can also work with any printer that’s accessible from a Windows, Mac or Linux computer running the Chrome browser. That computer must remain powered on and connected to the Internet for Cloud Print to work, but the printer itself can be directly connected to the computer via USB rather than to the network.

Whereas AirPlay requires little to no advance configuration, Google Cloud Print requires a bit. To set up your printer for Google Cloud Print, first check Google’s Cloud-ready printers site to see if it’s one with built-in support, and if it is, follow the setup instructions provided for your specific model. (The printer basically needs to be logged into your Google account and registered with the Cloud Print service.)  Otherwise, follow these steps, which outline how to configure a “classic” printer to work with Cloud Print. (Remember, you need to have the Chrome browser installed first.)

After setting up a printer, you’ll need to install a Cloud Print-compatible app on your Android devices in order to print (that’s because printing isn’t baked into the Android operating system.) Google doesn’t offer its own printing app, but there are several third-party apps available. One worth looking at in particular is the prosaically named Cloud Print, a free — e.g., ad-supported — app that’s in currently in beta. 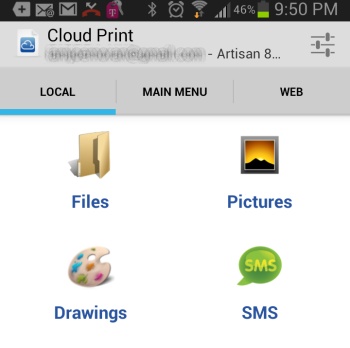 To be sure, printing with this app isn’t nearly as elegant as using AirPlay. Case in point, items must often be printed via a particular app’s “share” function (you’re sharing the item to Cloud Print, which in turn sends it to your printer), and some items such as SMS messages can only be printed from within the Cloud Print app itself. There are other limitations as well– Cloud Print can print email attachments, but not e-mail messages, for example.

In addition to the support they may (or may not) have for AirPrint and Google Cloud Print, most of the major printer manufacturers also provide their own mobile printing tools that can come in handy when you need to churn hard copies from your smartphone or tablet. Capabilities will vary by printer manufacturer, and by the specific printer model. However, most manufacturers provide printing features similar to what AirPrint or Google Cloud Print offer, i.e. local and/or remote printing via a directly networked or PC-connected printer.

May vendor-specific mobile printing technologies also throw in extra features such as the capability to scan documents directly to a mobile device, or to print documents from afar by sending them to a unique email address assigned to your printer. 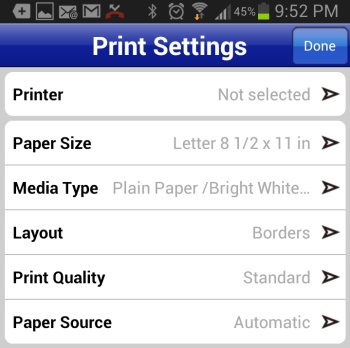 Figure 4: Epson Connect is one of several free services available from printer manufacturers that allow local and/or remote printing from iOS, Android and other mobile devices.

All of the mobile printing products/services listed below are free and work with both iOS and Android devices, but a few support additional mobile operating systems such as BlackBerry (HP) or Windows Phone (Brother). Find your printer manufacturer in the list below, and click on the links for detailed information on features and hardware compatibility, along with mobile app downloads.

Together, Apple’s AirPrint, Google Cloud Print, and the various printer manufacturers’ mobile printing tools give you lots of ways to generate a hard copy document from your smartphone or tablet when you need one. Happy printing.