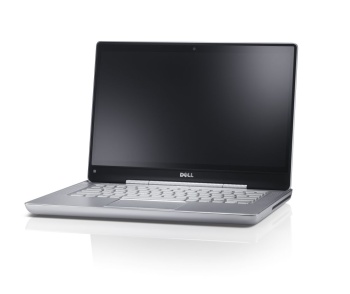 The Dell XPS 14z, a powerful, mid-sized small business notebook in an elegant anodized aluminum body, measures less than an inch thick with the lid closed. Dell positions the XPS 14z as a premium offering suited for businesses, and claims it is one of the thinnest, full-featured notebooks with a 14-inch display that also comes with an optical disk drive and discrete graphics.

Does the XPS 14z have what it takes to serve small and mid-sized businesses well? We take a closer look to see how it fares.

The Dell XPS 14z comes in models that incorporate second-generation Intel i5 and i7 processors with an optional discrete graphics chip. We tested a review unit powered by an i7 2640M processor clocked at 2.8GHz (with Turbo Boost of up to 3.5GHz) and an ample 8GB of system RAM. In addition, it also features two graphics cards — an integrated Intel HD 3000 and a discrete NVIDIA GeForce GT 520M with 1GB of video memory. A glossy, edge-to-edge glass with a slim bezel tops off a 14-inch display with a 1,366 x 768 resolution.

You’ll find external ports for peripherals arrayed along the back of the notebook, including one USB 2.0, one SuperSpeed USB 3.0, HDMI, Mini DisplayPort and a 10/100/1000 Ethernet port. Earphone and microphone jacks reside on the left side together with a 7-in-1 media card reader that is shielded from dust by a closely-fitted spring-loaded removable cover. A slot-loading 8x (DVD/CD-RW) rewritable optical disk drive can be found on right side.

As noted earlier, the case is made of anodized aluminum, while the bottom half consists of a formed aluminum base. The palm rest is a magnesium alloy painted in a stylish dark gray. The effect is a good looking laptop that could be mistaken for a MacBook Pro from afar. The XPS 14z weights 4.36 pounds for the hard disk drive (HDD) option, or 4.12 pounds with an optional solid state drive (SSD).

While we think the XPS 14z is one of the nicest-looking laptops from Dell, what impressed us is its speedy performance and solid construction. For example, boot up takes less than 30 seconds, while the notebook as a whole — even the LCD screen — is surprisingly rigid. This can probably be attributed to the liberal use of aluminum, which gives the notebook an extraordinary amount of rigidity without piling on too much weight.

And did we say that we absolutely love the built-in speakers? While lacking in terms of punch on the lows, the built-in speakers are distinctively louder than many other laptops that we’ve tried. When we played training videos, the voices sounded crisp with no hissing or crackling sounds even at the maximum volume. We imagine that it would be perfect for video conferencing, too.

And for executives who rush from meeting to meeting and wonder if there will be adequate charge left, the XPS 14z comes with a handy battery meter to help users decide if it needs to be plugged into a wall socket. You check the battery meter independently of the operating system via a built-in five-step LED gauge on the right-hand side. Simply press the battery-check button, and the corresponding number of LEDs will light up to indicate the amount of charge left. 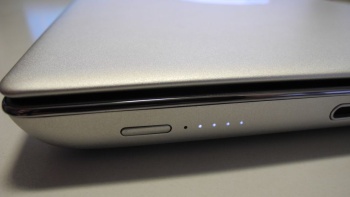 Figure 2: The handy five-point battery gauge along the laptop’s right-hand side works even if the notebook is switched off.

Finally, another LED indicator embedded on the hinge serves as a visual indicator as to whether the laptop is switched on. The indicator is cleverly positioned in such a way that it can be read regardless of whether the lid is opened or closed. The indicator light also blinks when the notebook is in sleep mode, leaving no room for ambiguity.

In line with its positioning as a premium notebook, every key on the beautiful chiclet keyboard is individually backlit. Keys are slightly rounded, with good tactile response and depth. Dell says the full-size keyboard is spill-resistant, though this is not a claim we tested for obvious reasons. The touchpad is generous and unlike the shallow clicking of some notebooks, both the left and right mouse buttons along the bottom of the touchpad provide a deep satisfying click.

Dell says that the 14-inch display offers 10 percent more screen real estate compared to a 13.3-inch display. Despite the larger size, the mediocre resolution display comes across as somewhat disappointing; we would have expected a slightly higher resolution given the notebook’s premium billing.

The XPS 14z comes with just two USB ports: one USB 2.0 and one USB 3.0. This is unlikely to be adequate for power users, who may be forced to pack an additional USB hub to avoid running out of usable USB ports. In addition, the lack of a VGA port may prove troublesome to businesses still stuck with VGA-only projectors or monitors. Of course, Dell is only following the trend of replacing the VGA port with the newer DisplayPort. To the company’s credit, it offers a Mini DisplayPort to VGA adapter as an optional accessory.

When compared with a new generation of Ultrabooks and ultra-slim notebooks, the XPS 14z does come across as somewhat heavy. Though this is hardly a deal-breaker, frequent travelers who require less computing power may want to opt for a lighter model. Finally, some users may find the location of the various ports along the back of the notebook to be less accessible than along the sides.

The Dell XPS 14z sports above-average specifications and is well-positioned as a desktop replacement with a reasonable starting price of $799.99. Dell’s efforts to position it as a premium notebook also shows in terms of terms of its sleek styling and comfortable backlit keyboard and trackpad.

On the down side, Dell has positioned the XPS 14z such that you cannot add the 256GB SSD option separately; the SSD is only available with the top-end configuration priced at a much heftier price tag of $1,499.99. This is a pity as we are sure that some users would prefer a smaller SSD over a beefier processor option. Nevertheless, we think the XPS 14z a solid business performer in an elegant package.