Review of the Asus Eee Slate B121 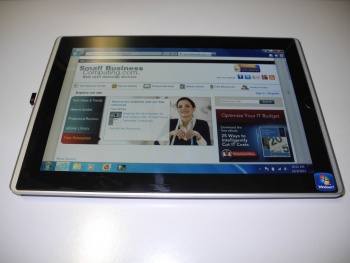 Review of the Asus Eee Slate B121

A business-centric Windows 7 tablet, the Asus Eee Slate B121 incorporates powerful expansion capabilities in the form of USB 2.0 ports and TPM security. But is it right for your small business?

So how does the Eee Slate B121 fare in the ultra-competitive field of tablets? Let’s start of by taking a quick look at its specifications.

Clearly, Asus has not spared any efforts in terms of cramming some of the best hardware components into this business-grade tablet, which is fronted by a Corning Gorilla glass and an AFFS display that offers up to 178 degrees of viewing angle. Taking a cue from tablets such as the BlackBerry PlayBook, the Eee Slate B121 can also output via a mini HDMI port to an external display.

The Eee Slate B121 Experience

Weighing just about 2.5 pounds, the Asus Eee Slate B121 is lighter than most notebooks. Taking it out of the box for the first time, I was immediately impressed by its even weight distribution, as well as the lightly ribbed surface of the plastic back panel — which allows for an excellent non-slip grip. The various buttons and switches such as the volume toggle, power rocker, orientation lock and virtual keyboard button are well-positioned and unlikely to be pressed accidentally.

Pushing gently on the power rocker switches the tablet on, which takes all of two seconds when in sleep mode, or a speedy 10-12 seconds from a cold boot. Similar to the IPS display used by most tablets, the Eee Slate B121’s AFFS panel offers vibrant colors and a wide viewing angle. The backlight is also sufficiently bright that I don’t foresee any issues when using the tablet with a colleague for collaboration.

Once started up, the Eee Slate B121 displays the familiar Windows 7 interface. Of course, it’s a tablet, not a notebook or desktop, so a virtual keyboard or handwriting-recognition widget replaces the traditional keyboard and mouse. Both are enabled by two methods: via the “Keyboard” button located along the top edge of the tablet, or by placing the cursor into an input field and tapping on the keyboard icon that appears (more on that later).

The back of the tablet felt slightly warm after about 10-15 minutes of use, and I could hear the whirring sound of its internal fan — albeit faintly. With the screen set to full brightness, the battery life fell far short of the touted 4.5 hours to just over 2 hours; I suspect that it would be barely achievable at half brightness. The tablet’s built-in speakers are powerful though, and music playback sounds louder than most notebooks.

The review unit that I tested did not come with any productivity applications, so I fired up Notepad in order to get a feel of how data entry works. I typed on the virtual keyboard, alternating between using the digitizer stylus and my fingertips. Overall, I found data input a somewhat frustrating affair when using the virtual keyboard, as I could only type in a “hunt-and-peck” style.

Using the stylus actually made matters worse, as I had to ensure that my hand did not accidentally brush against the screen — or have the focus abruptly snatched from the handwriting widget. This annoyance can be mitigated somewhat by docking the widget against the bottom part of the screen. However, I was pleasantly surprised by the accuracy of Window’s handwriting recognition — it was rather fun writing obscure symbols and having the operating system (OS) recognize them.

Unlike most tablets on the market, the Eee Slate B121 comes with 2x USB ports that, in conjunction with the underlying Windows 7 OS, means it can be used with a range of USB devices such as flash drives and a computer mouse. Given how marketing materials from Asus touted the tablet’s capability to work with multiple input devices such as Bluetooth keyboards; I decided to connect the tablet to a USB transceiver paired with a wireless Logitech keyboard and mouse.

The tablet promptly detected and recognized devices upon plugging in the USB transceiver, which allowed me to use both my wireless keyboard and mouse with the Eee Slate B121, literally transforming the tablet into a workstation. Indeed, the powerful Core i5 processor and generous 4GB of RAM ensured that I was able to browse the Internet using Internet Explorer with an experience indistinguishable from a desktop.

As I reviewed the Eee Slate B121, I kept thinking about usage scenarios in which buying this tablet makes sense. After all, its relatively high suggested retail price of $1,499 makes it a hefty investment for practically all small businesses. Why wouldn’t a business simply invest in a full-fledged notebook computer instead?

The Eee Slate B121 would truly excel in extremely space-constrained retail shops where it could serve as computer terminals for CMS or POS systems. You could connect the USB ports to barcode scanners, printers, or other related peripherals. Alternatively, you could also use the tablet as a self-service kiosk for customers, though apps will have to be specially designed to take advantage of the touch interface.

The Asus Eee Slate B121 is a well-designed business tool that offers a powerful blend of performance, security and mobility in a tablet device. On the business front, its relatively high price greatly limits its suitability for general deployment. However, in specialized usage scenarios, the Eee Slate B121 is a very powerful device and delivers an excellent experience that sets it apart from other offerings on the market today.

Consumers who may be more interested in media consumption or in a no-frills, Windows-based tablet though, may be better served waiting for the arrival of Windows 8 tablets towards the end of the year.