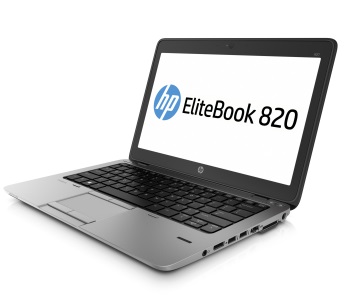 Laptop manufacturers embrace all sorts of eye-catching features these days, from a uni-body aluminum chassis to screens with retina-level resolution that you can touch and swivel. But with its EliteBook 820 G1, HP courts the sensible-shoe-wearing business crowd. With an emphasis on understated, solid design over flashy style, the EliteBook 820 prefers to be the small business laptop you use to get the job done rather than the center of attention.

A Slim and Strong Business Laptop

The notebook’s magnesium case features the stiffness of metal construction, but offers the softer and lighter qualities of a resin. While some say this gives the unit a cheaper feel than its heavy-metal predecessors, the positive tradeoff comes in its sub-3-pound weight. You can carry it easily, but it’s substantial enough to feel like a thing. Both the wrist rest and the screen are very solid with no discernable flex at all. The lid hinges are smooth but stiff, with absolutely no wiggle from hard typing.

With its 12.5-inch screen and 0.8-inch thickness, you can tuck the EliteBook 820 away easily for portability, although its generic gunmetal gray exterior won’t attract any gawking crowds.

Despite the EliteBook 820’s diminutive profile, HP provides plenty of connection ports. All ports reside on the left and right sides, including three USB 3.0 ports, one of which is a high-powered charging port. A VGA port and DisplayPort support external monitors.

Figure 1: The HP EliteBook 820 G1 features a magnesium chassis that‘s sturdy, if not stylish. It offers a range of processor options and weighs in at less than three pounds.

A smartcard slot, media card reader, headphone/mic jack, and a cleverly designed Ethernet port (which uses an expanding door to fit inside the slim chassis) round out the connection options. The docking port can connect to an HP dock for quick conversion to desktop use. A webcam graces the lid above the screen for video conferencing and selfies.

Too often, laptops are so tightly designed that it’s difficult for users to perform their own maintenance. Access to memory and hard drives, for example, ranges from restricted to requiring labyrinthine disassembling. Bucking the trend, the EliteBook 820 features a nicely design pop-off underside, which exposes most major internals: from the two memory slots to the wireless card, hard drive, and battery. You don’t even need a screwdriver. More manufacturers should take note.

The EliteBook 820’s island-style keyboard is no-frills but very respectable. While not quite at the legendary ThinkPad level, its flat-faced keys provide reasonable travel. The layout avoids the extreme quirks you sometimes see on ultraportable laptops, while also not possessing extraneous functions like media keys. You can set the optional backlighting at two brightness levels, although the dimmer level seems perfectly sufficient.

The small business laptop features both a trackpad and trackpointer, embedded in the middle of the keyboard. As a longtime ThinkPad user, I am particularly grateful to find a trackpointer these days. But even trackpad-phobes will appreciate that the EliteBook 820’s trackpad is quite responsive. It’s lightly textured enough to provide tactile sensation, and provides just the right amount of friction for accuracy. Separate left and right mouse buttons buck the current trend of a unified button, which may seem stodgy, but it’s perfectly functional.

Look at the Display Screen

The 12.5-inch SVA LCD screen on the EliteBook 820 sports the typical 1366×768 resolution. I appreciate the matte finish in this world of glossy mirror screens, but other than that, there’s little else to rave about. Brightness is good, viewing angles are typically mediocre. Some pixilation is visible.

If you believe, as I do, that higher resolution means greater productivity, HP would do well to upgrade the screen.

The Hardware Under the Hood

The 820 G1 offers three processor options: the Intel i3, i5, or i7 Haswell processor. Combined with up to 16GB of DDR3L memory in the two available slots, few business users are going to experience any performance bottlenecks. This is a good amount of power in such a small and light machine, although not more than many competing models.

The EliteBook 820 also offers a variety of storage options, from conventional hard drives to SSD drives ranging from 128GB to 256GB. An SSD is far preferable, especially in an ultraportable—it’s faster, quieter, cooler, and it will extend the battery running time.

You can choose from two batteries, both with three cells: a 26 WHr and a 46 Whr. The lesser (standard) battery will return about 3.5 to 4.5 hours of run time, which is nothing to brag about. HP claims a 12 hour runtime from the higher capacity battery, but figure about 25 percent less in real life.

You can outfit the EliteBook 820 with a variety of wireless cards, most of which support at least dual-band ABGN with Bluetooth. You can also add optional HSPA/LTE WWAN support, which of course would require a carrier subscription.

The EliteBook 820 supports both Windows 7 and Windows 8, although of course the latter does not benefit from touchscreen support. (Count me as someone who doesn’t understand the point of touchscreen on a laptop anyway.) HP bundles the 820 with the HP Client Security Suite, a collection of software which is especially oriented toward business users.

The HP Client Security Suite includes a credential manager, password manager, file sanitizer, device access manager, file/drive encryption, fingerprint reader, self-healing BIOS, and HP Trust Circles— among other utilities. These security features are baked into the factory Windows install. If you don’t use them, they may seem intrusive—e.g., frequent popups alerting you to configure security settings.

Expect a learning curve to derive meaningful use out of many HP security applications, but it’s well worth investing the time into them if you use the EliteBook 820 for business purposes.

Because the EliteBook 820 isn’t designed to “wow” out of the box, it can take some time using it to appreciate its low-key charms. Despite its lack of flair, it is sturdy and reliable with a build quality that conveys confidence. But there are some quirks and small annoyances, too.

Despite the nitpicks, the EliteBook 820 is designed for hard use without flinching, as demonstrated by its MIL-STD 810G military test rating for field durability.