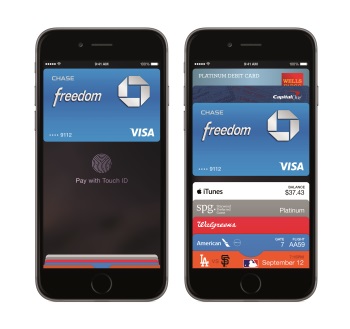 Apple Pay is coming, and small business owners will want to keep the near field communication-based (NFC) technology on their radar. But don’t rush out to offer the mobile payment option, at least not yet.

On Sept. 9, the Cupertino, Calif.-based i-maker debuted its mobile payments platform, Apple Pay. It may have been eclipsed by the appearance of Apple’s first phablet and long-awaited smartwatch—not to mention Irish rockers U2—but it has the potential to shake up retail and ecommerce in a major way.

Apple Pay combines NFC, a dedicated privacy-enhancing chip called Secure Element, and the company’s Touch ID biometric scanner to let iPhone 6 owners pay for their gadgets, boutique store finds or lattes by placing their phones near an NFC reader. Apple Watch extends the feature to owners of the iPhone 5, 5C or 5S.

Unlike current mobile payment options, credit cards stay securely nestled in their wallets (or at home). No card skimming and PIN-pilfering to worry about.

“When you’re using Apple Pay in a store, a restaurant or with other merchant, cashiers will no longer see your name, credit card number or security code, helping to reduce the potential for fraud,” assured Eddy Cue, Apple’s senior vice president of Internet Software and Services, in prepared remarks.

Major banks and credit card companies have already pledged their support. In fact, they are absolutely bullish about the mobile payments technology. American Express CEO Ken Chenault described Apple Pay as “the kind of innovative thinking that brings the worlds of online and offline commerce closer together,” in a statement. “We’re excited to work with Apple to offer Card Members and merchants a simple and secure way to make purchases in stores and on apps.”

Apple has also wrangled support for its mobile payments platform from retailing giants. As expected, customers will be able to use Apple Pay at the company’s own 258 retail stores in the U.S. Other early supporters include Macy’s, McDonald’s, Staples, Walt Disney World Resort and even Whole Foods. A software development kit (SDK) will extend the secure payments platform to ecommerce apps.

It may be hard to take all of this in and not get caught up in the excitement. However Jake Gasaway, co-founder of inventory management specialist Stitch Labs, advises small business owners to wait and see.

Getting What You (Apple) Pay For

Apple Pay is packed with potential, admits Gasaway. But there’s no point investing in new equipment, training and payment services now for a meager shot at attracting new customers.

During the splashy launch, Apple boasted that consumers can find NFC contactless mobile payment systems in 220,000 merchant locations in the U.S. An impressive figure, but it’s a drop in the bucket compared to the payments landscape.

Citing research from Gartner analyst Mark Hung, Gasaway said that NFC readers haven’t yet cracked the 10 percent mark. It’s not just the bed and breakfasts and sleepy town stores that have shunned the tech. Even in Stitch Labs’ tech-savvy hometown, NFC hasn’t caught on, said Gasaway.

“In a place like San Francisco where technology rules, you don’t really see it,” he told Small Business Computing. “In the small business community, [adoption] won’t happen immediately,” he flatly predicted. Consumers aren’t exactly clamoring for the Apple Pay technology, either. “People don’t find it inconvenient to swipe their credit cards.”

Apple Pay only benefits owners of newer iPhones, a “pretty small pool of people,” added Gasaway. And while popular, the iPhone has taken a backseat to Android in recent years, he reminded. “Market share is strong but, by far, it is not the number one phone.”

There’s also the matter of cost. Installing NFC is a $300 to $500 expense per terminal, not counting training and education, said Gasaway.

So for now, there’s no point in overhauling your mobile payment systems to make room for Apple Pay. But small business owners will want to chart its progress, said Gasaway. Apple, by “throwing its hat in the ring,” has raised awareness and given secure mobile payments “a new level of legitimacy,” he said.

“Definitely keep an eye on it,” he advised.