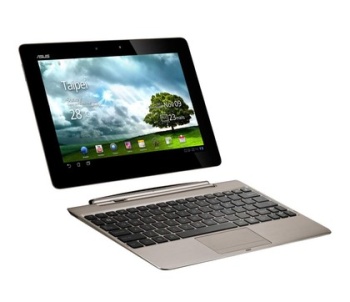 Though the mobile tablet first launched with the Android 3.2 Honeycomb OS, the Android 4.0 Ice Cream Sandwich update has since been released, and we evaluated the tablet on that basis.

So how does the Asus Eee Pad Transformer Prime fare for businesses when used together with the mobile dock?

In order to understand what the Asus Transformer Prime can do, let’s take a look at its specifications – which have the makings of a dream tablet. Under the hood, a Tegra 3 quad-core processor from Nvidia offers top-of-the-line processing capabilities. A typical 1GB of system RAM complements the processor.

Pair the Asus Eee Pad Transformer Prime tablet with its mobile dock for a powerful, full-featured ultraportable device for business.

Our review unit came with 32GB of storage, though models with up to 64GB of storage may be available depending on the region. You can increase storage space by means of the micro-SD reader on the tablet; this can be further expanded by the SD card reader located on the mobile dock. If so desired, you can add even more storage space by means of a USB flash drive using the sole USB slot also located on the mobile dock.

The Prime’s 10.1-inch screen measures slightly larger than the iPad’s 9.7-inch display, though the tablet is a bit longer and ever so slightly less wide as a result. The display features a very bright screen based on Super IPS+ technology, 1,280×800 resolution, 10-finger multi-touch, and Corning’s Gorilla Glass.

Finally, the Transformer Prime comes with one micro HDMI port and a 2-in-1 audio jack for headphone and microphone-in port. The tablet weights 1.29 pounds, while the mobile dock weights 1.16 pounds.

The metallic circular pattern of the tablet gives it a very classy look and despite a larger 10.1-inch screen, it sports similar physical dimensions to the new iPad. The Transformer Prime is thinner however (sans keyboard), and felt noticeably lighter than Apple’s latest generation tablet. The 1080p video playback was smooth, although the volume produced by the built-in speakers was not as loud as we would like.

Launching Apps and overall usage was snappy, thanks to the powerful quad-core Nvidia Tegra 3 processor. In Performance mode, we were able to open at least eight separate tabs in the Web browser before the experience started lagging slightly – though the Web browser remained usable even at that point.

Asus has clearly devoted extensive efforts in designing the mobile dock. The top row of shortcuts on the keyboard, which proved to be incredibly useful, includes hotkeys for toggling Wi-Fi and Bluetooth on and off, launching the Web browser, and adjusting screen brightness and volume control.

Moreover, the dock also includes multimedia controls and a convenient shortcut that immediately puts the device into sleep mode.

The USB 2.0 port on the mobile dock let us connect a Logitech Unifying USB receiver so that we could use our Logitech mouse and keyboard with the Asus Transformer Prime.