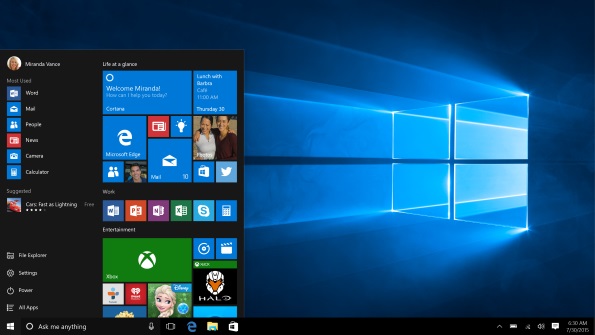 Microsoft finally released Windows 10 today, an operating system (OS) that builds on Windows 8.x while undoing many of the idiosyncrasies that kept many businesses away.

The new OS blends the best aspects of Windows 7 and 8 so that diehard holdouts of the former get the desktop experience they love while enjoying the many performance and mobile enhancements that Microsoft has cooked up over the years, according to Brad McCabe, product marketing manager of Microsoft Windows Commercial.

Upon booting up, “commercial customers will notice a UX [user experience] that is both fresh and familiar. It has the things users know and love,” McCabe told Small Business Computing. They include what many industry watchers hail as the triumphant return of the Start Menu, a fixture since Windows 95—but with a twist.

“The Start Menu, which feels familiar, has been enhanced with live tiles,” said McCabe. Joining the traditional list of applications, search bar, and pointers to the control panel and common file destinations, you’ll find the company’s customizable, self-updating tiles borrowed from the Windows 8 Start Screen. They provide at-a-glance information about your respective apps, letting you keep tabs on social media, the latest news and work updates.

Windows 10 brings back the familiar Start Menu, but now you can customize it to your specific needs.

Don’t like live tiles? You can turn them off completely for a Windows 7-like look and feel. You can also resize the Start Menu with a wealth of options that let you fine-tune the experience to better suit how you work.

Beyond the Start Menu, you’ll find other productivity-enhancing features that Microsoft bets will win over the Windows faithful, particularly those hoping to fully embrace mobile, cloud-enhanced work styles.

“Microsoft has built-in several improvements designed to increase productivity,” according to Dell client solutions spokesperson Peter Fontana. Among them is a new Windows 10 feature—called Continuum—that finally lets 2-in-1 PCs shine.

The 2-in-1s running Windows 8.x were big on potential, but they fell a bit short when it came to seamlessly switch between desktop and tablet modes. Undocking the tablet portion from the keyboard for an impromptu meeting or a quick dash to the shop floor often took more thought and consideration than their get-up-and-go form factors suggested. Windows would generally go about its business, oblivious to the device’s transformation.

Continuum adjusts the user interface when it detects that a keyboard has been removed or flipped over, and it automatically changes from a desktop view to a touch-friendly, tablet-like experience—and vice versa. During a recent hands-on demonstration with Microsoft representatives, Continuum lived up to the promise. Mode switching was snappy and seamless, with apps (universal Office apps in this case) that remained fully useable whether they were poked or clicked-on.

Fontana also believes small and midsized businesses (SMBs) will appreciate a new secure login option on select systems with Intel’s RealSense 3D camera technology. Dubbed Windows Hello, you can enjoy the time-saving benefits of single sign-on “or unlock your computer with facial recognition,” he said. Currently, the capability is available on “several systems within our portfolio,” he added. In total, Dell has 70 Windows 10 configurations available now—some of which are already arriving for preorder customers—with more to come before the holidays. 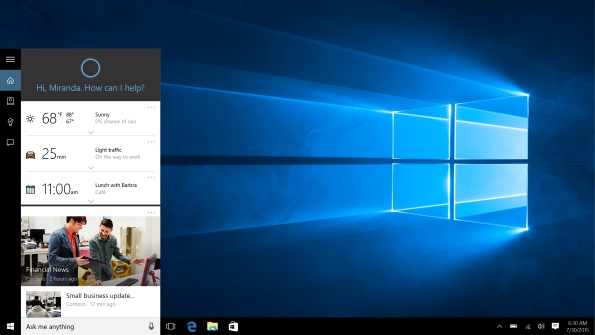 Cortana, a digital assistant in Windows 10, learns how you work over time to become more useful.

There are several other new touches designed to help you get more done, faster and with fewer steps. These include Cortana, the digital assistant that “learns” about you over time and grows increasingly more proactive in providing help. No privacy concerns here; you get to decide how far Cortana reaches into your digital life.

Brad McCabe’s favorite new addition is the ability to set up different workspaces. “I love multiple desktops, because I do so many different things,” he said about the many responsibilities back at Microsoft. “I can snap a bunch of windows [and maintain] a set of desktops” making it easy to switch between them and pick up where he left off.

Another compelling reason to upgrade is its price tag. “We encourage small businesses to take advantage of the free upgrade offer to Windows 10 from genuine Windows 7 and Windows 8.1 PCs and tablets,” said Terry Myerson, executive vice president of Microsoft’s Windows and Devices Group, in a statement.