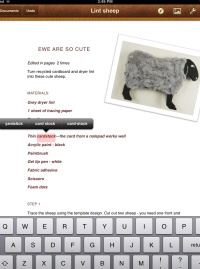 The iPad hides its sensible side under a consumer gadget veneer that can lead one to believe that the iPad is best-suited for watching videos and checking Facebook and Twitter. However, considering their light weight, good screen size, generous battery life and functional interface, it’s not surprising that many people ask “Can I do real work on this thing?”

In this article, we put the most popular mobile office iPad apps to the test to see how they perform. We looked at the following iPad apps:

We came away from the exercise with an app we really like and some salutary advice about the realities of doing real work on your iPad.

The iPad for Business

If you’re serious about working on an iPad, then you need a good keyboard. Trying to type more than a couple of lines with the onscreen keyboard is cumbersome. Instead shell out the money for an external keyboard — we like the Bluetooth Logitech Keyboard case by ZAGG, which doubles as a case and a stand when you are typing.

There are a few downsides to working on an iPad. If you favor Microsoft Office, the only Microsoft Office small business software you’ll find for the iPad is an iPod/iPhone version of OneNote. And, while Safari can access the Microsoft Office Web apps, it can display your files only in the mobile viewers — you can’t edit them; you can’t even click a cell in a worksheet to view its formula.

Office Apps are sold, like all other iPad apps, on a “caveat emptor” basis. You won’ find free trial versions; you take the risk and pay your money, and if you don’t like the app you won’t get your money back. Luckily most mobile office apps retail for well under $20, so the cost of experimenting won’t break the bank.

Getting Files to the iPad

For most apps you will need an online service like Dropbox to get files onto and off the iPad. The exception to this is the Apple mobile office apps (Numbers, Keynote and Pages), which can make use of the new iCloud/iWork or iTunes.

In a pinch you can email documents to and from the iPad. If you’re planning to work on your iPad, for example on a long flight, get your files on the iPad and check that you can access them before you leave or put them somewhere in the cloud and email them to yourself. That way, if one method fails you’ll have a second option.

All of the apps in this round up can create documents, worksheets and presentations. It’s in the areas beyond simple text and basic formulas that they differ. QuickOffice Pro HD, Documents to Go and Office2HD do not support charts, although Numbers and its sibling the word processor, Pages, do.

Most word processors cannot create tables although Office2HD and Pages can. Neither Documents to Go nor QuickOffice Pro HD let you add images to documents, but Documents to Go can show embedded graphics and tables.

If you don’t work with images, tables or charts then creating documents won’t a problem. It is a big issue, however, when you’re working on existing documents. For example, if your customer sends you a beautifully formatted Word document complete with tables and images, you may be concerned that you can’t see them.

But you won’t live down the embarrassment if you return the document stripped bare of all these features. You need your office app to treat things it can’t show you with respect and not remove them.

We sent a document with an image, formatting and tracked changes to Office2HD, and it came back with the changes messed up, limited formatting and no image. When we opened the same document in Pages, we were told that all Tracked changes would be accepted and that two fonts were missing. Not all the formatting survived the editing, but the result was much better. In short, some applications are better than others at protecting elements they don’t support.