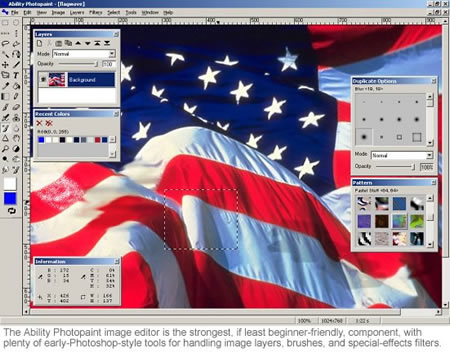 We’ve said many times that the most home and small-office users don’t need all the frills and features of Microsoft Office, and we’re glad to point out low-priced alternatives to the ruling suite. But life’s too short to use mediocre software, and even the bargain price of $50 isn’t irresistible now that the superb, cross-platform, highly-Office-compatible OpenOffice.org 1.1 is available free for the download. So it’s hard to recommend Ability Office.

The integrated package Ability dates way back to the DOS days (debuting in 1985 with a free trial CD in PC World magazine); the Windows version arrived a decade later, then evolved through Ability Plus to the most recent edition, formally dubbed Ability Office 2002. The product now belongs to a U.K. company, but several distributors have pitched it to the U.S. market over the years.


Ability Office promises a lot for your $50, while taking less than 40MB of hard disk space (and, in a marketing boast that reveals its vintage status, running on Win 95 or later systems with as little as 32MB of RAM). Separate modules provide word processing, spreadsheet, database, drawing, and image-editing functionality — there’s no presentation program to rival PowerPoint or e-mail and calendar to match Outlook.


The Ability Photopaint image editor is the strongest, if least beginner-friendly, component, with a plethora of early-Photoshop-style tools for handling image layers, brushes (ranging from pattern and gradient fills to dodge, burn, and smudge and burn tools), and plenty of special-effects filters as well as routine cropping, contrast, color, and brightness adjustments.


There’s a red-eye reduction feature, but it’s a tricky combination of the Magic Wand and Eraser tools instead of a ready-made shortcut as in almost every image editor of the past few years. On the positive side, Photopaint — like the other Ability modules — offers virtually limitless undo and a handy “Print to PDF” export driver.


A Mixed Bag at Best

Similarly, relational database veterans will find the Ability database a capable clone of Microsoft Access, with wizards that help step you through the process of creating tables, queries, forms, and reports. But the SQL-oriented database structure is too complex and intimidating for casual users expecting anything akin to the flat files of Microsoft’s similarly priced Works — especially since Ability’s word processor and spreadsheet, by comparison, are firmly in the Works/Office 95/Office 97 camp — we’re tempted to say the Windows 3.1 camp — of more basic, somewhat dated simplicity.

The spreadsheet offers multiple (up to 255) worksheets, each allowing up to 256 columns and 65,536 rows, with a good variety of functions and formatting options as well as cell comments and rather plain charts, though the charts in our Excel worksheets disappeared on import.


The word processor tells much the same story — it offers a decent array of formatting features, from headers, footers, and tables through multiple columns and text wrap around graphics (though the latter requires two steps, inserting a frame and then putting an image therein; if you embed a graphic directly, it breaks up the flow of text).


There’s a fair-to-middling thesaurus and spelling checker, and automatic conversion of straight to “curly” or typographic quotation marks — but not apostrophes; no on-the-fly spelling correction or error underlining as you’ll find in even inexpensive shareware like Atlantis Ocean Mind; and no Ctrl-Del or Ctrl-Bksp editing shortcuts as you might be accustomed to from Word and WordPad.


Worse, though the File Open/Save dialog box offers plenty of file formats in addition to Ability’s own (the inclusion of .SAM for Ami Pro is another hint of the suite’s advanced age), Word and RTF documents failed to load anywhere near correctly, let alone with formatting and images, on our Windows 2000 desktop, even after we visited the Ability site to download and install the latest program update and a Word/RTF/Works “filter pack.” Several arrived as literally blank pages.


The Ability site says a major upgrade to the program is planned for 2004; we look forward to seeing it, but we think it’ll have its work cut out for it. As is, we’d rate Ability well below the thrifty Microsoft Works, or Software602’s 602PC Suite — let alone the remarkable, free OpenOffice.org — for users savvy enough to realize they needn’t spend a premium for Microsoft’s über-suite.

Eric Grevstad
Previous articleInterland Offers More Than a Web Site
Next articleProducts of the Year: The Winners Are …