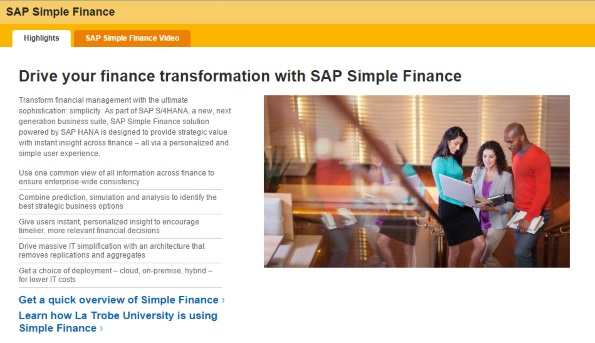 During last year’s SAP Sapphire Now conference in Orlando, Fla., the German business software giant launched Simple Finance. The offering harnesses real-time analytics, accounting, and planning into a suite of tools aimed at helping businesses to not only keep an eye on their finances, but to also improve them.

“Delivered in SAP Cloud powered by SAP HANA, SAP Simple Finance sets a new standard of business software in our industry,” Bernd Leukert, executive board member of SAP products and innovation, said in a statement at the time. “CFOs and finance departments can now augment their strategic role in driving the business performance with real-time analytics and planning capabilities delivered in the cloud.” In March, the company added a Cash Management component that reports an organization’s complete cash position, also in real-time.

Hana is SAP’s in-memory processing platform. Compared to traditional servers with gigabytes’ worth of DRAM, in-memory systems can be outfitted with terabytes of DRAM, making short work of big database and business analytics workloads whose data would otherwise reside in comparatively slower hard drives and other storage hardware.

It all sounds very high-end, and it is. IT architectures that support that much memory are pricey, not to mention the cost of the DRAM itself. To bring the technology within the reach of small and midsized businesses, SAP made it available in the cloud.

From QuickBooks to SAP Simple Finance

In the past year Convergent IS, a small but growing, Canadian IT consultancy firm, saw its headcount increase from 10 employees to more than 30 as the company expanded into other markets and ramped up a professional services unit.

Stretching beyond the borders of Canada into the United States and India meant dealing with multiple currencies, multiple legal entities, and a more complex supply chain that involves “shipments of hundreds of devices,” according to Shaun Syvertsen, managing partner at Convergent IS.

Compounding those challenges was an accounting system that made it tough to monitor the company’s financial health at any given time.

Prior to deploying SAP Simple Finance, Syvertsen’s company relied on “QuickBooks and a heck of a lot of Excel spreadsheets,” he told Small Business Computing. In fact, Convergent IS ran “multiple instances of QuickBooks,” he admitted.

After weighing the alternatives, Syvertsen and crew went with SAP, despite the company’s reputation for catering to big businesses. Virtual desktop infrastructure pioneer Citrix, data storage giant EMC, and PC-maker Lenovo are just a few of the large companies that use SAP’s financial software.

Part of the reason Convergent IS settled on SAP Simple Finance is that it’s “designed for scale,” Syvertsen said. As his company grows, the software can keep up, providing end-to-end visibility into how cash flows into and out of the organization.

The software is flexible, too, allowing businesses to run it on SAP’s cloud or in a variety of hybrid-cloud setups. In this case, it’s the “on-premises edition running on the Amazon cloud,” Syvertsen said.

According to Syvertsen, “it’s not just the financials that [Simple Finance] handles.” It also helps his company “do a better job of handling the sales pipeline,” he said.

With both historical and predictive analytics capabilities, the software allows businesses to spot opportunities or fine tune their operations in response to changing market conditions. A highlight for Syvertsen is the forecasting capability. “I’m spending less time chasing stuff in a spreadsheet,” he said.

When it comes to accessing those forecasts or entering financial data, Simple Finance lives up to its branding, Syvertsen assured. The guided user experience is “frankly a quantum leap,” he said.