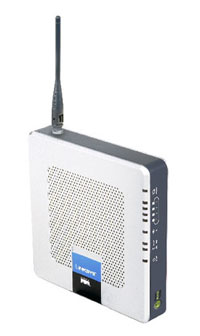 Network attached storage (NAS) — hard drives that you attach directly to your network rather than to one computer on the network — make good sense as a solution for sharing files among co-workers and for backing up computers in a small office. Most hard drive vendors and many network vendors now sell NAS appliances designed for home and small office use with prices starting as low as $200.

Linksys, however, offers a potentially cost-saving alternative. Its $100 Wireless-G Media Storage Link Router product (WRTSL54GS) lets you plug any USB hard drive into the router and use it as a NAS drive. You can also plug flash memory drives into the USB port.


The WRTSL54GS is an all-in-one solution for Internet sharing and 802.11g WLAN and wired LAN switching. It includes four 10/100 Mbps Ethernet ports for plugging in wired devices and a port for plugging in a high-speed modem. The product supports both WPA2 (Wi-Fi Protected Access-2) security and WMM (Wi-Fi Multimedia), a.k.a. Wireless Multimedia Extensions (WME), a quality of service (QoS) protocol for prioritizing multimedia traffic on a Wi-Fi network.


The Media Storage Link has the compact form factor of some other recent Linksys router products. It measures 5.51 x 5.51 x 1.06-inches and weighs only 0.6 pounds. It can be mounted on the wall with screws or placed flat on a table or shelf. It also has an integrated stand that slides out, allowing you to stand it on edge.


The product performed well enough on basic file sharing functions, but set-up was a little bumpy, and we encountered problems using it with one particular backup program. These problems are still unresolved at the time of writing. It’s difficult to be certain, however, whether we can attribute any of all of these issues to the Linksys product.


If you’re looking for a NAS solution and you have a suitable USB drive, the Media Storage Link Router will save you some money. In fact, it can save you money even if you don’t already have the USB drive.


Consider this: The 300GB Maxtor OneTouch III, a popular high-speed USB drive, sells for about $200. Total investment for a 300GB NAS solution with the Linksys router: $300. That compares to $400 for the NAS appliance alone if you buy Buffalo Technology’s 300GB LinkStation product that we reviewed recently.


The Linksys product includes other features that will sweeten the pot for some people. It uses the company’s SpeedBooster wireless enhancement technology, which Linksys claims can increase network speeds up to 35 percent if you use the router with SpeedBooster-enabled Linksys network adapters. It supposedly provides some improvement even when used with other vendors’ products, but we saw no evidence of this in our testing.


People with home networks may find the media server feature useful — some day. Many already use wireless media players that plug into a home entertainment system and stream music and video from the hard drive of a PC running proprietary media server software. The problem is the PC has to be turned on to play the media.


With the Media Storage Link, you can store music on the NAS drive. The media server software on the router will discover the music and serve it to a media player — so long as the media player is compliant with UPnP (Universal Plug n Play) standards. The trouble is, as far as we can discover, there aren’t any media players that offer this level of UPnP compliance. None of the three wireless media players we have on hand would work.


The case for NAS is clear. If you put files to be shared on a hard drive attached to one computer on the network, that computer must be turned on for other people to have access to the files or be able to back up to the drive. Performance on the computer to which the drive is attached may also degrade when other people access files or back up.


More importantly, by putting vital company files on a NAS drive and having employees back up to NAS, companies can better manage data security and integrity. Vital files and backups are no longer on storage media controlled by individuals who may not be as careful about data security as they should be. Centrally storing data makes it easier to ensure unauthorized people don’t get access, and it also avoids version conflicts.


Like other NAS solutions, the Linksys product lets you set up “shares” — volumes and folders on the NAS disk where shared files are stored, or to which employees can back up. An administrator can set up groups of people and give them password-protected access to certain shares — and revoke access privileges as required. Employees can use Windows to map shares so they show up as local drives in Windows Explorer, making it easy to access files and, theoretically, back up to the NAS.


Setting up the groups and shares, using the Media Storage Link’s management utility, which you access in a browser window, is relatively simple. The documentation does, however, assume that you understand the basic concepts, which some small business owners may not. And some of the dialogs are less than intuitive.


Initial set-up of the Linksys product did not go particularly smoothly. Our test network includes a desktop PC and a Vonage voice over Internet (VoIP) adapter, both plugged directly into the router, plus two wirelessly connected computers, two wireless media players and a wireless network bridge. We plugged a 250GB Western Digital USB drive into the Media Storage Link’s USB port.


We frequently swap out one router for another when reviewing products. In most cases, re-connecting the wireless devices is simple or completely automatic. One of the wireless media products, a Creative Labs SoundBlaster Wireless Music player, does almost always cause problems. It was particularly difficult to get it stabilized and working with the Linksys product. The Vonage adapter needed to be reconfigured before it would work, and the wireless bridge, a Linksys product, required a hard reset before it would work.


We were hampered in some of the troubleshooting by the fact that the management utility did not report the presence of some devices even after they were attached and working.


None of these problems were serious, other than as annoyances, and all were eventually resolved. In another network, with other devices, they may not even arise. We’re also not suggesting that the Linksys router is entirely to blame in all or even any of these cases. Networks can be complex beasts. Sometimes supposedly compatible network devices simply don’t like each other.


In most testing with simple file sharing — copying or moving files from local hard drives to the NAS drive — the Media Storage Link worked fine. However, we did encounter problems related to communicating with network shares that we have not experienced when transferring files to and from other network devices, and we haven’t been able to resolve them.


In a couple of cases, when transferring multiple files to the NAS drive using Windows Explorer, the transfer aborted after partially completing, and Windows issued an error message suggesting this was because it had lost connection with the network drive. According to our research, the problem and error message can have a number of causes. Most appear to be unrelated to network hardware but, as noted, we’ve never encountered this problem when transferring files between other network devices.


we were also unable to use the Media Storage Link with an automated backup program, Retrospect Express 6.5 from EMC Insignia — another problem that remains unresolved. When attempting to execute scheduled backup scripts, the program reported that it could not write to the NAS drive and issued an error message suggesting there was a problem with permissions. Again, it’s not clear this occurred because of a flaw in the Linksys product. But it did occur.


Bottom line: The Media Storage Link is a neat idea that can save money on network attached storage. But make sure your dealer will take the product back, no questions asked, if you run into the kinds of problems described here.