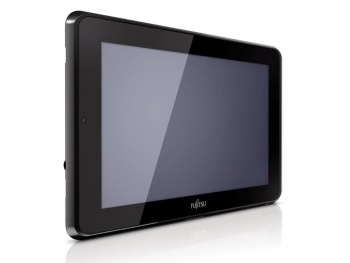 The Fujitsu Stylistic Q550 should be the answer to every small business owner’s tablet prayers. It’s a business-oriented, 10-inch Windows tablet that iPad-crazed employees might just accept as an alternative to sexier, but less secure, consumer products.

While it offers appealing features that the iPad and other tablets don’t — including important security and connectivity features — it simply can’t compete in important areas such as touch interface, screen and form factor.

Fujitsu argues, with some justice, that comparing the Q550 to the iPad is comparing apples to oranges, but those comparisons will inevitably be made. Whatever the company might like to think, both products are viable contenders as business tablets.

At best, the Q550 will find a niche market among small businesses that are very security-conscious — and also able to resist pressure from employees to allow iPads and Android tablets on the corporate network.

Let’s look first at the plus-side of the ledger for the Q550.

One big benefit is that it uses the same Windows operating system (it ships with 32-bit Windows 7 Professional) as all your other PCs, so it can run the same applications.

It even comes with Office Starter 2010, a reduced-functionality, ad-supported version of familiar Microsoft Office, with Word and Excel. It can also run a full version of Office.

Unlike the iPad and other consumer tablets, Windows supports true multi-tasking, with multiple windows open and tasks active at the same time, making it a more flexible and efficient business device.

Advocates also argue, plausibly, that Windows tablets reduce software and IT management and support costs because they integrate more easily with existing computers and systems.

On the other hand, tablets running Windows are definitely not instant-on, which is one of the iPad’s best-loved — and in many business situations, most useful — features. Windows did launch reasonably quickly on Q550 we tested, but it’s a far cry from instant-on.

More importantly, the Q550 has a bunch of built-in enterprise-class security features. They include a fingerprint reader, with OmniPass software from Softex. In our testing the reader worked flawlessly, with minimum effort required to enroll users. Biometric authentication eliminates the need for Windows passwords. Swiping a finger over the sensor automatically logs you in and launches Windows.


It’s especially useful in environments where more than one person uses the tablet. And it’s an especially good idea for portable devices that are easily lost or stolen.

The Q550 also has a Smart Card slot that you can use for authentication (instead of or in addition to biometrics) with cards and third-party software from companies such as Cherry.

The built-in solid state drives (SSDs) have full encryption capabilities, and you can configure the USB port and SD card slot so it’s impossible for anyone to copy data from the tablet to an unauthorized thumb-drive or memory card.

Fujitsu is pushing the security features hard. Do most small businesses need them? Probably not, but companies looking to run mission-critical applications on a tablet with sensitive customer or company data will see enormous benefit.

One of the great complaints about the iPad is that it’s not very expandable, connectible or flexible. Whereas the iPad has only one proprietary port, the Q550 provides built-in USB and HDMI ports, an SD memory card slot and a proprietary docking port.

In fairness, the one iPad port can be used for many types of connections – USB, HDMI, VGA, SD – given the right adapters from Apple. With the iPad, however, you cannot access data on a USB hard drive even if you use the USB adapter. And some USB peripherals that require power over the USB cable won’t work either.

The Q550 had no difficulty powering a USB speaker phone that did not work with the iPad. It also worked fine with portable USB hard drives.

With the iPad and some other consumer tabs, if the battery begins to lose its ability to hold a charge — as it eventually will — you have to send the unit to the manufacturer to have the battery replaced.

With the Q550, however, you can buy a new or second battery and quickly install it yourself or switch between batteries to keep working longer. The batteries offered don’t deliver the iPad’s long, 10-hour battery life, however.

The two-cell battery that ships standard with the lower-priced Q550 models lasts up to 4 hours. The four-cell unit that ships with the higher-priced models keeps the unit powered for up to 8 hours and 10 minutes (but it adds a few more ounces to the weight).

This is one of several areas where the Q550 begins to suffer in those inevitable comparisons with the iPad.