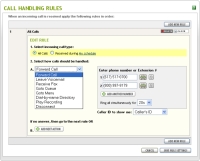 Branding these days is everything, or just about everything.

Which is why the investors behind Phone.com LLC, a new provider of virtual PBX and voice over Internet services, were willing to pay big bucks for the coveted domain name. The firm is billing itself as The New Phone.Company. Cute.

Luckily for small business owners, there’s more to Phone.com’s Virtual Office than a catchy slogan and easy-to-remember Web address. Built from the ground up and managed by a group of seasoned VoIP veterans, Virtual Office should give established players in this space ,such as RingCentral, Innoport from Intellicom Inc. and GotVMail, a run for their money.

Like all such services, it offers small- and home-based businesses a great way to provide professional-sounding central call answering and distribution, as though they were in a big office with an expensive PBX. It makes particular sense for businesses with distributed work forces.

Pricing
For $9.88 a month (if you pay a year in advance), Phone.com provides you with a toll-free number – local numbers are also available or you can “port” your existing company number to Phone.com – plus up to ten virtual extensions and voicemail boxes and 300 minutes of calling.

You can also choose other options that give you more telephone numbers, more extensions, more free minutes per month and lower rates for additional minutes. The top price of $69.88 a month buys 2,500 free minutes, up to 50 extensions and three numbers.

The idea is that customers call your Phone.com number and use the automated attendant to select the department or individual they want to reach. Or they can bypass the menu by directly dialing an extension number.

With a virtual PBX, you typically use browser-based software to set up call handling rules that determine how the provider routes calls to each of your extensions.

A simple rule might go something like this: when a caller dials extension 500 or presses the menu number linked to it, forward the call to this phone number. Typically it’s the ten-digit number of a phone company or VoIP line. Your “extensions” could be in different parts of the city, the country – or the world.

You mainly pay for incoming calls, whether the call is forwarded to another number or just goes to a voicemailbox. Virtual PBX providers always include a certain number of free minutes. With most, if calls are forwarded to U.S. or Canadian numbers, they count against your minutes. If the forwarding number is outside North America, you pay extra, different rates depending on the destination.

‘Free’ Overseas Calling
One of Phone.com’s nice differentiators is that the free minutes include several overseas destinations: Britain, France, Italy, Germany, the Netherlands, Israel and Puerto Rico. Phone.com claims that its international rates to other countries are lower than its competitors.

There are some circumstances where you will use Phone.com to make outgoing calls, to bridge a three-way call, for example – another differentiating feature. Then you’re charged for two calls. You can also make calls through Phone.com when you’re away from the office – to avoid exorbitant long distance rates at hotels, for example – and those calls will be charged against your minutes.