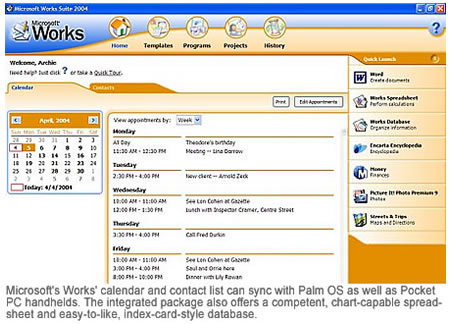 We’ve often joined the chorus criticizing Microsoft for hyping forthcoming, oh-boy-it’s-gonna-be-fabulous, don’t-even-think-about-buying-a-competitor products, then sailing far past their promised ship dates. But we think it would have been nice if Works Suite 2004 had been pushed back a couple of months instead of shipping on schedule last fall.


That’s because the two main components of Microsoft’s small-business-friendly productivity and creativity bundle are Works 7.0 and Word 2002 — both unchanged from Works Suite 2003 — and the inclusion of Word 2002 seems to hint that small businesses who don’t need all the frills and features of Microsoft Office don’t deserve up-to-date software, because Word 2003 debuted last October. Granted, the word processor hasn’t changed much beyond the addition of a handsome document-browsing or Reading Layout view, but it doesn’t look good to make Mom, Pop, and the kids settle for leftovers.


That said, Works Suite 2004 is still one of Microsoft’s best values — even before this year’s edition’s $9 price cut, to $100 with a $15 mail-in rebate coupon in the box. In addition to Works — which combines a spreadsheet, database, appointment calendar, and task-oriented launchpad interface — and Word, you get Encarta Encyclopedia Standard 2003, to give the kids a head start on their homework; Streets & Trips 2002, to plan this summer’s vacation drive; Money 2003 Standard, to help manage the family and to a certain extent, business finances; and Picture It Photo Premium 9, to turn digital-camera snapshots into more polished-looking artwork for Works Suite’s various newsletters, greeting cards, and other print projects.

If the kids are in high school or college rather than grade school, the clan might want to spend a bit more ($149) for Microsoft Office Student and Teacher Edition 2003. But while that suite offers Word, Excel, and Outlook plus PowerPoint, it doesn’t have any image-editing, checkbook-balancing, or road-mapping functionality. Perhaps more important, it doesn’t have the more than 500 document templates and nearly foolproof program- and file-management layout of the Works Task Launcher.


The first tab on the latter’s tabbed interface is Works’ calendar, which offers simple but effective choices of daily, weekly, and monthly views and ways to enter single or recurring appointments — though it may be easier for beginners than for veterans of Outlook or other business-class personal information managers; right-clicking to edit items doesn’t always work as you’d expect and the reminder-alarm option is a little hard to find and inflexible (you can’t set an alarm for 5 or 10 minutes before an appointment rather than 15, for instance).


To Microsoft’s credit, Works’ calendar and contact list can sync with Palm operating system as well as Pocket PC handhelds. The integrated package also offers a competent, chart-capable spreadsheet and easy-to-like, index-card-style database with both single-record form and design and spreadsheet-style list views.


Other tabs let you decide how you want to work — conventionally, by launching an application or loading a recent file, or by pointing (to see a helpful pop-up description) and then clicking to begin a task or project. Most of these involve one of Works Suite’s fill-in-the-blank templates, some 100 of which are new since last year — attractively formatted word processing documents, worksheets, and database forms for home- and school-oriented jobs ranging from household inventories and club sign-up sheets to exercise and car-maintenance checklists. A project — whether prefab or made by you — pulls together a set of tasks, each of which can have its own due date for Works’ calendar. 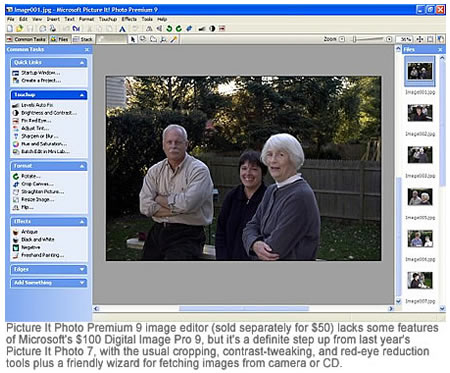 Along with a smoother installation routine and more polished Task Launcher screens, the most improved player on the Works Suite 2004 team is the Picture It Photo Premium 9 image editor (sold separately for $50). Though it lacks some features of Microsoft’s $100 Digital Image Pro 9 — such as the Smart Erase tool that helps remove unwanted background objects or bystanders — it’s a definite step up from last year’s Picture It Photo 7, with the usual cropping, contrast-tweaking, and red-eye reduction tools plus a friendly wizard for fetching images from camera or CD; handy shortcuts for resizing images and slimming their file sizes for e-mail or Web use; and a Mini Lab batch-processing option to rename or optimize a bunch of shots in one step.


The benchwarmer of the squad is probably Money 2003 Standard, which holds users’ hands through checkbook-balancing and budget- or expense-tracking jobs, but is skimpy compared to its Money Deluxe and Premium siblings, which offer more help with investments, credit and tax management, and financial-goal scenarios such as buying a home, sending a child to college, or retiring.


Somewhere in between on the usefulness scale — especially for families with broadband rather than dial-up Internet access — are the Encarta encyclopedia and Streets & Trips. The former (after a default installation) requires you to keep its data CD on hand, but then delivers smoother, swifter access to informative articles and multimedia extras than the online version; the latter offers somewhat more flexible routing and options for driving preferences and gas costs than online map and driving-directions sites.


Finally, Microsoft Word 2002 is the super-powered word processor and almost full-fledged desktop publishing program you know already, which leaves us with the same gripe we expressed when reviewing last year’s Works suite: Since Works 7.0 contains — and buyers are paying for, though not seeing in the Start menu — a perfectly capable word processor, complete with columns, tables, headers, footers, and footnotes, we simply can’t agree with the decision to supplant it, or supersize it, with the relatively big and bloated Word.


The Works word processor is strong enough to handle the overwhelming majority of the shopping lists, flyers, and invitations that make up the Works Suite templates, and doesn’t bring the ponderous Product Activation baggage of Word 2002 — which not only tells consumers they’re thieving pirates who can’t be trusted, shutting down after 50 uses unless activated by phone or online, but spams the Start menu with the Microsoft Office startup utility and needless “New Office Document” and “Open Office Document” alternatives to the likeable Works Task Launcher.


In short, a $9 discount for 2004 isn’t enough to change our 2003 conclusions: First, the beginner-friendly-without-being-baby-food Works 7.0 ($55 with $15 mail-in rebate) is one of Microsoft’s best, least-publicized products. Second, we wish the company would offer a step-up suite that bundled it with Publisher instead of Word — and, ideally, its Digital Image Suite 9 combo of the full-bore Digital Image Pro editor and Digital Image Library organizer. Never mind Streets & Trips and Money; we want Works Pro.