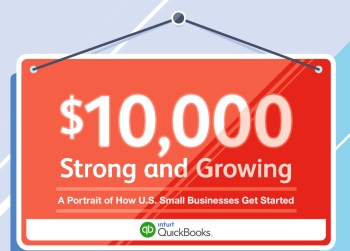 Intuit has good news for entrepreneurs.

In a survey of 500 small and midsized business (SMB) owners, the company discovered some “big surprises,” according to Terry Hicks, vice president and general manager of the company’s cloud-based QuickBooks Online division. Among them is the relatively paltry amount that it takes to launch a new startup. (You can view the full results of the $10,000 Strong and Growing survey in this pdf document).

“Sixty-four percent of small business owners start with $10,000 or less,” Hicks told Small Business Computing. It’s an amount that’s within reach of anyone who can squirrel away a piece of their paychecks.

“The primary source of funding is their savings,” said Hicks. Another 11 percent apply to banks and other financial institutions for funding, while 10 percent said that they hit up family or friends. Two percent pursue investors, while just one percent of respondents seek out government grants or funding programs.

Small business owners split on whether borrowing has improved since the recession. Fifty-one percent of the people surveyed said that securing financing is easier, while 49 percent said the small business borrowing landscape remains the same.

While many would consider $10,000 a small price to pay to embark on a journey toward financial independence, there are risks involved starting out with such a tiny war chest.

Entrepreneurs that venture out with $10,000 or less need to be particularly vigilant, said Hicks. “It’s warning sign that these businesses are undercapitalized.”

Hicks recalls the experience of a friend who ran a successful apparel shop that specialized in Greek letters in a college town. Swarming with fraternities and sororities, the shop was a victim of its own success.

Proving that too much of a good thing can be just as disastrous as a dearth of customers, Hicks’ friend discovered that he was “not capitalized at the level where he could keep up with the success.” Not investing in the three foundational elements of startup success (more on that later) forced him to shutter his doors after a crush of demand overwhelmed the shop owner.

“Being undercapitalized can be a big risk,” said Hicks. It’s a reality that many small businesses will face in the coming years, if they make it that long.

Citing statistics from the from the U.S. Small Business Administration (SBA), Intuit notes that half of all new small businesses will survive five years. Just one-third of small businesses starting out now will celebrate their tenth anniversary.

Ten grand leaves little room for error. “Every penny counts,” said Hicks. He encourages small business owners to “learn about financial management, and not just about the top line,” he said. It isn’t enough to understand account balances; entrepreneurs must learn how money flows through their businesses.

Hicks believes that three factors contribute to startup success and significantly improve the chances of the initial $10,000 investment leading to long-term success. They foundational elements boil down to “having good financial practices, having good tools [and] having a good advisor.”

Good financial practices means ditching spreadsheets or pen and paper as accounting tools. They may be the job done, but they mask the intricacies of operating a small business. Today, startups can link cloud-based accounting software to their bank accounts and receive real-time visibility into how business processes translate into cash inflows and outflows.

Finally, enlisting the help of a good advisor allows shop owners, innovators and other professionals to focus more on satisfying their customers and less on getting up to speed on accounting practices, said Hicks. Just forty-two percent of small businesses work with accountants to help guide the course of their success, according to the report.