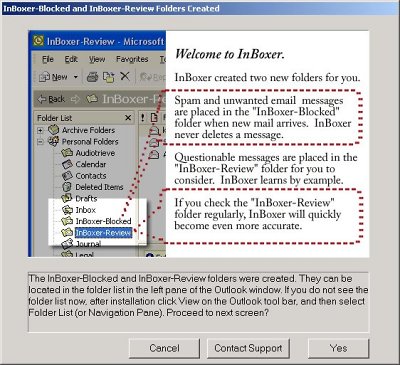 There’s an easy way to stop 100 percent of annoying spam: Give up e-mail. If that’s not an option, you’ll have to devote some effort to fighting the tidal wave of unwanted, often offensive, and always time-wasting offers for windfall investment deals, dream vacations, industrial equipment, miracle drugs, anatomy enlargers, and shameless hussies that swamp both business and personal inboxes nowadays. Of the options we’ve tried so far, the one that takes the least effort for the best results is InBoxer from Audiotrieve.


The first things to say about InBoxer are that it’s an add-in that works only with Microsoft Outlook versions 2000, 2002/XP, and 2003 — Outlook Express and other e-mail programs aren’t supported — and costs $25 (after a three-week free trial period). It runs on the client PC, not the server; Audiotrieve offers volume discounts for office deployment (such as 10 licenses for $200).


The next thing to say is that, while neither it nor any spam blocker bats 1.000, InBoxer proved surprisingly smart in intercepting 95-plus-percent of our daily junk mail. And while it let through a few dozen Viagra alternatives and lonely coeds in our two weeks’ use, it nearly aced the more important test of properly delivering desired or genuine e-mails: out of over 1,700 messages, the software posted only two “false positives” in routing real mail to one of its you-probably-want-to-delete-this bins instead of Outlook’s Inbox folder.

Like other sensible spam filters, InBoxer doesn’t delete any messages, so a false positive won’t be lost forever. Instead, it creates two new folders (shown below) for you to peruse and empty at your convenience — InBoxer-Blocked for messages that are almost certainly and InBoxer-Review for messages that are probably spam (adjustable filters default to over-90-percent and 15-to-90-percent likelihood, respectively).


Determining that probability of spamhood, badness, or junkitude is the main job of any e-mail filter. InBoxer belongs to the newer class of spam battlers that go beyond simple “whitelists” and “blacklists” of known good and bad e-mail senders and red-flag words in messages or headers (such as casino, which spammers can easily type as ca$ino or cas1n0).


Instead, like an antivirus program that uses heuristics as well as known virus pattern lists, it follows the “Bayesian analysis” approach made famous by programmer Paul Graham in a series of papers starting in August 2002: The software reads each message and compares it to an ever-growing, customized database of good and bad e-mails.

During installation, you tell InBoxer to keep an eye on Outlook’s Inbox — and any other folders you’ve set up — to learn what good messages are like; the software combines this knowledge with its default vocabulary to begin its filtering work (applied after any filters you’ve already created with Outlook’s Rules Wizard).


You help refine or train InBoxer by reviewing intercepted messages at the end of each day (or whenever you like): both the Blocked and Review folders add a “Keep” button to the Outlook toolbar, teaching InBoxer that selected messages are not spam, with the Review folder adding a “Block” button that means, “Put this in the Blocked folder next time.”


Having two intercept folders instead of one makes InBoxer a bit more labor-intensive than some other antispam programs, but the idea is that the Review folder will help winnow false positives (our two misclassified “good” messages were directed there, not to Blocked) and see fewer and fewer entries over time. A pull-down menu lets you add to InBoxer’s arsenal of rules by specifying blacklist and whitelist senders and domains.

It’s fun to poke around in InBoxer’s settings and check the “message analysis” breakdown of individual e-mails, showing how they earned their probability-of-spam rating. One of this morning’s muscle-building miracles, for instance, includes the word building, which InBoxer notes appears in 43 messages we’ve kept and only 20 we’ve deleted, but also forever, which appears in only 3 good versus 10 bad messages, and sexual, which carries a 96-percent chance of spam — we’ve kept it only once and deleted it 25 times. (The former was a note about the company’s sexual-harassment seminar, if you must know, though Audiotrieve claims that InBoxer can eventually learn to allow sexy notes from your spouse while dumping pornographic spam.)


Is that level of annoyance reduction worth $25? We won’t hesitate to say yes. If you use Microsoft Outlook, InBoxer is impressive.