HubSpot: The Evolution of Marketing 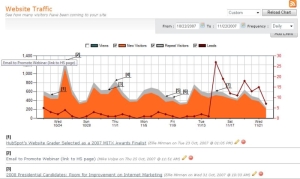 It’s a story as old as evolution: the hunter becomes a farmer. Many marketers are making that transition now as they begin to understand that with the Web, farming is way more effective than hunting.

At the same time, Huelsenbeck started targeting bean counters rather than IT types. “[The software] shows companies how to save money,” he noted, “and that resonates better with financial people.”

But cold-calling remained a frustrating exercise. By last fall, Huelsenbeck was almost ready to throw in the towel. His success rate had fallen to one meeting booked for every 100 cold calls.

I Hear Epiphany
Then in October he attended a marketing conference that opened his eyes and possibly saved his company.

The conference leaders asked how many of those attending had MySpace or other social media sites. Most stood up. Then they asked how many were using those tools for marketing. Almost everybody sat down.

For Huelsenbeck, it was a turning point. He realized that by exploiting the techniques the conference was teaching, he could make the transition from hunter to farmer and turn the firm’s Web site into a magnet for prospects.

Inspired, he started looking for search engine optimization (SEO) service providers and Web-savvy public relations firms that could help him bring prospects to the Vocio site.

Search engine optimization has become an essential science for Web marketers. It helps them choose the best words and phrases to include on pages, in metadata and in URLs to help ensure a site appears high in search engine hit lists when prospects enter those terms. PR firms can also help build traffic to a Web site.

But Huelsenbeck balked at the prices quoted by SEO and PR service providers. “I was looking at fixed expenses over six months of $20,000 to $30,000 for something that might or might not provide a good return on investment,” he said.

Then someone pointed him to HubSpot.

Huelsenbeck went to the HubSpot Web site and read the white papers. They were saying the same things about Web marketing that he had heard at the conference. And the price was right: $250 a month plus $500 for set up.

The HubSpot software provides a variety of SEO tools for analyzing the effectiveness of search terms. For example, you can key in a search term you’re considering using and the software will automatically generate a list of related and similar terms that might be useful.

A chart shows statistics that help determine which might be the best to use. How many times do people key the term into search engines, and how many other sites use it – so how effective is it likely to be for your site if you use it too?

Turning Visitors into Leads
Part of the HubSpot philosophy is that good search engine optimization will draw visitors to a site, but it takes more to turn visitors into sales leads. The software also makes it easy for non-technical Web developers to add white papers, surveys and other online forms that will engage and capture information from visitors.

And it includes a site monitoring and statistical analysis package that among other things can generate a time line graph showing how various on- and off-page marketing initiatives have boosted site visits – or not.

The HubSpot methodology, a long, interactive document supported with video clips and available online to registered subscribers, provides step-by-step instructions on how to use the software tools to optimize a Web site and other “off-page” techniques, such as press releases, white papers and blogs to draw visitors.

A Shiny New Site
Vocio had previously used a Web design company to create its site. It was expensive and it took far too long to get changes made – two to three weeks sometimes.

Although Huelsenbeck was originally attracted to HubSpot by the SEO and site monitoring tools, he decided to give the content management system a try to see if he could eliminate some of the Web site expense.

“We’re a software company so we’re fairly technical,” he said. “Still, I’ve never programmed in HTML, and I know nothing about Web site design. But within three days I had a new site up that was dramatically better than the old one – and it was search engine optimized.”

To say a site is search engine optimized doesn’t mean much on its own, of course. The proof is always in the pudding.

The Pudding
Vocio has seen a “dramatic” uptick in site visits, even if absolute numbers are low by the standards of less-specialized companies. Visits jumped from five or six a week to 30 or 40 after Huelsenbeck renovated the site and executed the HubSpot methodology.

More importantly, the company for the first time landed a customer that came to it through the Web site. This was after fewer than 90 days of using the HubSpot service.

“That one customer alone will generate tens of thousands of dollars in revenue for the year,” Huelsenbeck said. “So the [percentage] return on investment to get that client, even if it was the only one we got [this year], is in the hundreds or thousands.”

Vocio has received lots of other leads through the Web site. Some didn’t pan out for various reasons, but the company is still negotiating with others, including one private equity firm that could lead to bigger things.

“If we do a good job for that company, it opens us up to providing services to all of its clients,” he said. “We could double or triple our revenue from that one lead.”

A New Path
The bottom line is that Huelsenbeck’s sold on the HubSpot doctrine of transitioning from outbound to inbound marketing.

Rather than paying hunters to go out and find prospects, he now invests that money in cultivating his Web presence to attract prospects. The next steps will be developing white papers to publish at the site and refining the search engine optimization. HubSpot was the agent of change, but for Vocio it’s just the beginning.

“With the same amount of money directed to SEO and PR [as we’re now spending on outbound marketing] ,” Huelsenbeck said, “I expect we’ll see four to ten times the return on investment. And I see the company growing much faster.”