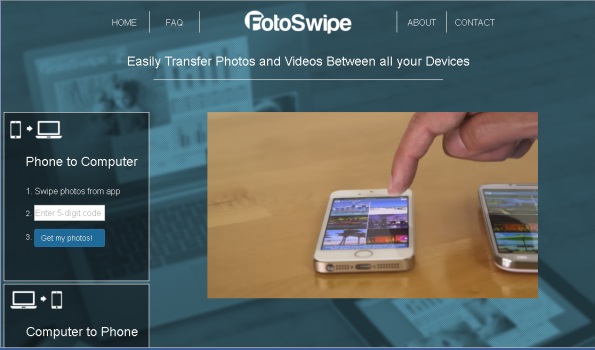 FotoSwipe, the popular and well-regarded photo-sharing app for Apple iOS and Android devices makes it trivially easy to transfer full-resolution pictures and videos between smartphones and tablets. And now, you can move images from your mobile devices to desktop computers with the swipe of a finger.

If you’re not familiar with the FotoSwipe app, here’s how it works: Use either Wi-Fi or cellular connections—no Bluetooth pairing, cable connections, or cloud storage accounts required—to drag-and-drop images from one mobile phone to another in a few easy steps.

After you launch the app and place the phones close together, you tap an image or select a group of pictures you wish to share privately. Then you simply swipe away from one phone toward the other, and the images appear on the target device. FotoSwipe uses peer-to-peer Wi-Fi connections when available for the fastest possible transfer speeds; otherwise it enlists the cloud to act as a middleman of sorts.

If the photo-recipient’s phone isn’t nearby, the app generates a sharing code that you can send via your preferred messaging app. FotoSwipe sharing codes remain valid for 24 hours.

“We put one and one together,” Sylvain Dufour, FotoSwipe’s founder and CEO, told Small Business Computing. “We’ve all used drag-and-drop for years. No one had done drag-and-drop between two [mobile] screens.”

The Raleigh, N.C.-based technology startup released FotoSwipe in November 2015. To date, the free app has been downloaded more than 2 million times, and it has garnered 4-plus star reviews on both the Apple App Store and Google Play. Each month, people trade 10 million photos and videos over the cloud-enabled platform.

After a few successful months, Dufour and his team tackled another photo-sharing problem. Mobile shutterbugs often rely on cloud storage—sync- and file-sharing services like Dropbox—to access their smartphone pictures across all their devices. But those services don’t handle selective and immediate sharing very well, he said. To get images onto a desktop, people end up emailing or texting image URLs to themselves, or worse, fishing out a USB cable to transfer the images manually.

To remedy this, FotoSwipe launched a free Web-based version of the photo-sharing app.

You launch the FotoSwipe app on your smartphone as usual, and swipe to generate a 5-digit key. Using your PC’s Web browser, you go to FotoSwipe.com, input the key, and download the selected images and videos as a .zip file. You complete the entire process with “no cable, no registration, and no sign-up,” siad Dufour.

Even Windows Mobile die-hards can join in, said Dufour. Although his company doesn’t have a version of the app for Microsoft’s smartphone operating system, the new Web-based alternative allows FotoSwipe “to support pretty much any device,” he said.

Dufour admits that people using the FotoSwipe mobile app may notice somewhat of a lag while transferring their images to a PC. Whereas a phone-to-phone connection can handle 1,000 photos a minute, the website can transfer roughly 50 photos per minute. “It’s not as fast as phone-to-phone [sharing], but it’s still pretty fast,” he said.

FotoSwipe is Ready for Business

Dufour also candidly admitted that his company didn’t have business users in mind when they launched the FotoSwipe apps and Web service. But they built it, and business came.

“I don’t think we built it initially to target businesses,” he said. Nonetheless, small businesses began contacting the company and sharing their experiences with the app. Real estate agents, engineers, and countless other professionals that rely on digital photography for their day-to-day work use FotoSwipe to simplify their workloads. It lets them quickly and securely transfer images from their phones to their desktops or to network-attached storage (NAS) systems for shared team access.

The five-digit code generated for FotoSwipe on the Web is valid for a minute and photos uploaded to AWS are even more short-lived. “We never keep anything,” said Dufour. “As soon as it’s received it’s deleted immediately.” Since FotoSwipe doesn’t collect email addresses, it’s “also very private,” he added.