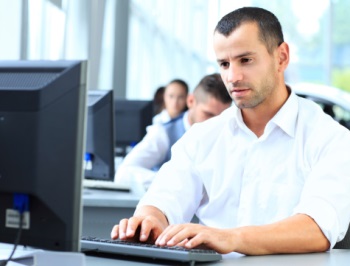 Moreover, there are signs that these repetitive, manual processes are taking a toll on workplace productivity. EnableSoft cites a new report from the United States Bureau of Labor Statistics that indicates productivity fell 3.5 percent in the first quarter of 2014 in the corporate sector.

Foxtrot “lets knowledge workers automate processes and workflows,” said Milam. In fact, the automation software has been tested to perform the work of two or more traditional employees, according to the company.

Foxtrot Desktop and Professional editions both run on Windows, while the latter includes support for Web applications. The software creates a “digital employee,” of sorts, by automating applications without coding, complex macros or software-specific add-ons.

Using Excel as an example, Milam said that after a brief, user-friendly setup process, workers are well on their way toward freeing up valuable time. To get started, “[you] take a targeting object; drag it over to the field where you want to enter [data]; send data to it and select the field in the spreadsheet.”

Foxtrot then creates an editable script item that you can tweak and test, and use to “create your own error-handling” in mere minutes, said Milam. In the end, projects—such as importing thousands of email addresses, processing orders and countless other repetitive tasks—take less time and are less prone to human error.

The software works with practically all apps by fully leveraging their user interfaces, added Milam. Foxtrot recognizes and intelligently interacts with fields, buttons and other interface elements. In short, “QuickBooks thinks it’s a human,” he boasted.

The initial time investment to reclaim countless hours of workday productivity is minimal, assured Milam. Training on his company’s full-featured enterprise product typically takes less than two hours, he reported. Tech-savvy workers can breeze through in even less time.

Advances in IT and software have undeniably made many business processes more efficient, but manual unstructured data processes still exist in every organization, said Milam. “When you can’t move data from one system of record to another system of record, options are limited.”

Businesses can opt to not move the data at all, or they can “relegate it to some off-record spreadsheet,” and both tactics increase the chance of mishandled sensitive information or even data breaches, he said. Often, businesses will choose to process unstructured data manually, which comes with its own downsides.

Repetitive manual tasks “burn up relational capital,” the value of interactions and relationships with customers and stakeholders, warned Milam. And there are cost concerns as well. Small business owners often “underestimate the cost of having someone do them,” he said.

Exiling an employee to hours of data entry is not only a terrible waste of their talents; it’s a poor financial decision. Milam estimates that most firms spend $40,000 on-boarding, training and supporting entry-level workers to the point that they begin having a positive financial impact on their operations.

You squander that investment if workers sit behind a keyboard and mouse for hours on end instead of engaging with customers and finding solutions to the business challenges of the day. Manual software processes stand in the way of solving “human problems that need to be solved by thinking humans,” said Milam.