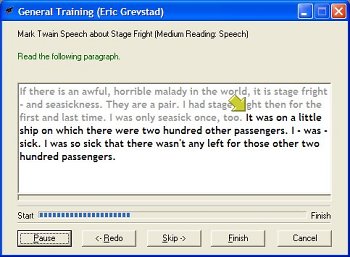 It’s appropriate that ScanSoft, the office software company best known for its OmniPage optical character recognition program, should be the vendor to pick up the pioneering Dragon NaturallySpeaking when its previous seller self-destructed a couple of years ago. Just as a printed page imported into your word processor via OCR usually arrives with a few minor typos, but still saves plenty of time compared to retyping the page manually, NaturallySpeaking’s speech recognition isn’t perfect, but can still make a slow typist much more productive. And with version 7, Dragon’s dictation accuracy climbs from impressive to remarkable.


Like previous editions, NaturallySpeaking 7 is available in a handful of different packages. Most users will wind up choosing between the $200 Preferred package tested here and the $100 Standard version: The $60 Essentials starter kit is too skimpy, lacking optimized support for applications other than AOL, Internet Explorer, and Dragon’s own WordPad-level word processor, while the $700 Professional (and $1,000 Legal or Medical) versions are too pricey for most buyers to justify their added macro scripting, support for multiple specialized vocabularies, and Outlook and PowerPoint shortcuts.


The Standard package is worth a look if you anticipate using speech recognition mostly to dictate word processing documents (it supports Word 97/2000/2002 and WordPerfect 10). But users serious about keeping their hands off the keyboard should head straight for NaturallySpeaking 7 Preferred, which adds not only Excel and Outlook Express support but the ability to play back your dictation; text-to-speech reading of selected text in a synthesized voice; and the option of transcribing voice notes saved on a handheld digital recorder or (new in this version) a Pocket PC PDA. It also lets you create your own dictation commands, such as saying “Legal disclaimer” to type three paragraphs of boilerplate text.

Slap on a Headset and Start Talking
In addition to boasting 15 percent higher accuracy than version 6, ScanSoft says, NaturallySpeaking 7 lets you begin dictation in as little as five minutes — the time it takes to set up a user profile or introduce the program to the sound of your voice. (The software is licensed for a single user, but you’re permitted to install it on both work and home or desktop and laptop PCs as long as you don’t share it with anyone.)


We found the real-world installation time to be more like 10 to 15 minutes, but that’s still far quicker and less tiresome than the 45 minutes or more of adjusting sound levels and reading sample passages we’ve experienced with some speech-recognition programs. Frankly, however, setup was still the most frustrating part of the process — while the program offers a good variety of short sample texts to read aloud, the on-screen prompt or moving arrow stuck repeatedly, making us read a sentence a second or even a third time before moving on. On the positive side, the 14-step, learn-by-doing tutorial is painless and helpful.

Power users will also want to invest in a better noise-canceling microphone (alas, PC audio input is still nowhere near ready for casual chat into a desk-mounted mic, especially if you work in a shared office or cubicle with background noise). NaturallySpeaking 7 Preferred comes with an Emkay half-headset — a boom mic and single earphone — that works adequately, but felt cheaper than the Plantronics or Parrott headsets we’ve seen in previous PC speech bundles. Sound playback is hissy, and the flexible boom feels flimsy when you bend the microphone into its proper position near the corner of your mouth.


A new Vocabulary Optimizer offers to analyze your Word, WordPerfect, RTF, and text documents and Outlook or Outlook Express e-mails to analyze your writing style. We were warned that the process would take five to 30 minutes, so were surprised when it took hardly a heartbeat — it turns out the default setting looks for files only in the My Documents folder, which we don’t use. You can manually specify folders or files for Dragon to scan later.

Accurate speech recognition has always demanded the most powerful PC hardware available, so Dragon benefits more than most applications from today’s muscle-bound yet affordable systems: For most programs whose side-of-the-box official requirements list a 500MHz Pentium III (or AMD compatible) processor with 128MB of memory, we’d tell you to double that, but for NaturallySpeaking we’re tempted to triple it.


That said, on our admittedly ample Windows XP desktop — a 2.53GHz Pentium 4 with 512MB of DDR266 and an 80GB hard disk — Dragon delivered snappy performance, keeping up with (actually, in real time, keeping roughly one sentence behind) our casually rapid conversation and not complaining about either processing power or the system’s low-cost, integrated sound card (16-bit, 11KHz, monaural Sound Blaster-compatible audio will do).


NaturallySpeaking normally occupies a toolbar you dock at the top or bottom of your display, though we found we needed its vocabulary-word-training or -adding features rarely enough that we switched to its smallest incarnation, a system-tray icon that you click to turn on the microphone. (You can turn the latter off by saying Microphone off, or pause it — while you answer a phone call, say — with Go to sleep and Wake up, but you obviously can’t turn on a switched-off mic just by talking into it.)


As you speak, your words and commands appear in a little yellow window in the toolbar a moment before they’re typed into your word processor or other application. Unlike the earliest speech-recognition programs, Dragon works best if you rattle on in your normal voice, making no effort to pause … between … words or enunciate robotically. Rather, it uses pauses for first-class, nearly faultless distinctions between dictated text and punctuation (Please call me at your earliest convenience, semicolon, I look forward to hearing from you, period) and commands (Delete previous word. Select paragraph. Cut that. Paste that.). If you’re fussy, you can switch the program into explicit dictation, command, number entry, or spelling modes.

Say What?
We were impressed — truly, better than impressed — with NaturallySpeaking 7’s accuracy. It was nearly perfect with proper names and when formatting dates and dollar amounts. It knew SUV. It capitalized Super Bowl. It initially turned Amelia, our small cat into Amelio, our small-cap (a former Apple annual report?), but didn’t miss a beat as we veered from a routine business letter (Here are the fourth-quarter sales figures) into stream-of-consciousness nonsense (The next phase of our plan for world domination involves making microwave popcorn in sufficient capacities to fill every cathedral and post office box in the western United States).


If you see an error, you simply say Select or Correct followed by the word or three in question. NaturallySpeaking 7 highlights the incorrect text, letting you say Delete that, Spell that [one letter at a time], or simply dictate (i.e., type over) it.


Or, more often than not, you’ll say Choose 1 or Choose 2 to accept one of the suggestions in a pop-up Quick Correct box. The latter does a very smart — and over time, almost psychic — job of anticipating your corrections, as in the screen shot above when we paused to correct the slurred the winter with for the winter. (If it guesses wrong, simply ignore the box and it’ll vanish.)


When you combine what we’d judge as Dragon’s 90- to 95-percent accuracy with 80-odd-percent accuracy in Quick Correct suggestions, suddenly PC dictation starts seeming awfully viable as an everyday input tool. And if you’re willing to invest a little time, the program offers plenty of options for fine-tuning and tweaking its understanding of your voice.


There are other neat, near-addictive conveniences to be found, such as NaturallySpeaking 7’s ability to learn the names in your Outlook Express address book (just say Launch Outlook Express, new message, [name] and you’re underway), or the fun of saying Click [link text] to jump to a Web-page link in Internet Explorer — although otherwise browsing or navigating between pages not on your Favorites list is an awkward job of spelling out URLs, saying Go back, and so on. And while it lacks the Professional version’s scripting language and macro recording, the Preferred package does make it easy to create new commands or voice abbreviations for frequently used insertions.

Realistic But Raised Expectations
That’s not to say NaturallySpeaking 7 attains science-fiction levels of perfect, voice-controlled computing. The new version’s “auto punctuation” feature, designed to insert commas and periods as you speak, didn’t thrill us — it inserts too many periods and not enough commas, and you still have to say question mark, exclamation mark, and so on anyway.


The feature introduced in version 6 to filter out ah, um, and er interjections didn’t always work. Dragon fared much better with Word, WordPerfect, and WordPad than with our favorite, little-known shareware word processor — with the latter, it often forgot to capitalize the first word in a new sentence.


While the ability to hear yourself read back your own dictation is a plus, ScanSoft’s touted RealSpeak text-to-speech synthesizer, far from being a natural-sounding voice, is merely the least robotic of several robotic choices (one “female natural voice” sounded like Harvey Fierstein doing Marlon Brando as the Godfather). Spoken commands for cursor and mouse movement are so unwieldy as to be almost unusable. And maybe once or twice per page, you’ll bog down in a loop of making a correction, then correcting the correction, flailing through a fourth or fifth try and saying Scratch that more often than a poison-ivy patient.


Still, Dragon NaturallySpeaking 7 Preferred is the real deal, a productivity package that proves PC dictation is ready for the mainstream (or at least one that knocks IBM’s ViaVoice 10 back to a very distant second place). The sentence that appeared most often in our dictation? Hey, it worked!