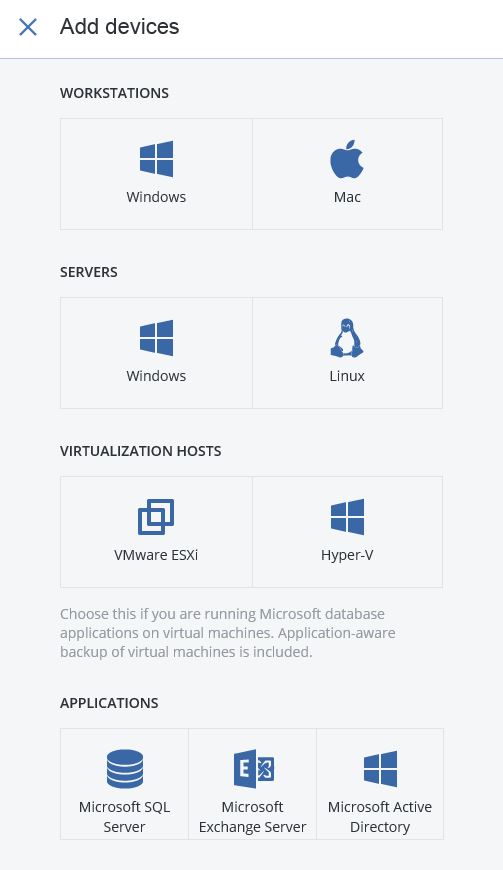 Backing up small business data can take a fair amount of time and effort, so it stands to reason that the more — and more diverse — your collection of systems/devices, the more time and effort the task will require. (The hassle often involved in backing up probably has something to do with why many small businesses don’t always do it as comprehensively or frequently as they should.)

Acronis, a name that’s become almost synonymous with backup, bills its new Acronis Backup 12 as the “World’s Easiest and Fastest Backup Solution.” While we can’t validate such an absolute claim, we can say that Acronis Backup 12 backs up a wide variety of systems and devices, was quite easy to install and configure, and made restoring from backups a relatively simple and painless affair.

Acronis Backup 12 works with a variety of operating systems and applications, on either physical or virtual machines.

We don’t usually talk about a product’s pricing up front, but we will in this case because Acronis Backup 12’s price tag will vary considerably depending on how many and what type of systems you want to back up as well as how you choose license the software. The choice of how to license also has ramifications for how you use the software.

Acronis offers licenses as one-, two-, and three-year subscriptions (paid in advance, it’s important to note) that include product updates and 24/7 support for the duration of the subscription period. Acronis also offers “perpetual licenses” for those who’d rather purchase software the old-school “pay once and you’re done” method, though in this case the support and updates aren’t perpetual — they’re only provided for one year.

Some pricing examples: the license cost to back up one Windows or Linux server, which in the case of the former includes support for Microsoft Exchange, SharePoint and SQL applications, is $41.58 monthly (about $499) for a one-year subscription. That drops to $27.75 monthly ($999) for either a three-year subscription or a perpetual license. In contrast, for a single PC or Mac workstation, the corresponding one- and three-year/perpetual license costs are $3.25 monthly ($39) and $2.47 monthly ($89), respectively. You can also purchase separate subscription to cloud-based storage for your backups, at prices ranging from $25 per month for 250 GB to $359 per month for 5 TB on a one-year subscription, with slightly lower costs for two- or three-year terms. You can calculate the cost for backup licenses and cloud storage for the specific number and type of systems in your environment with the calculator on the Acronis website. Keep in mind that an unrestricted 30-day trial is available. 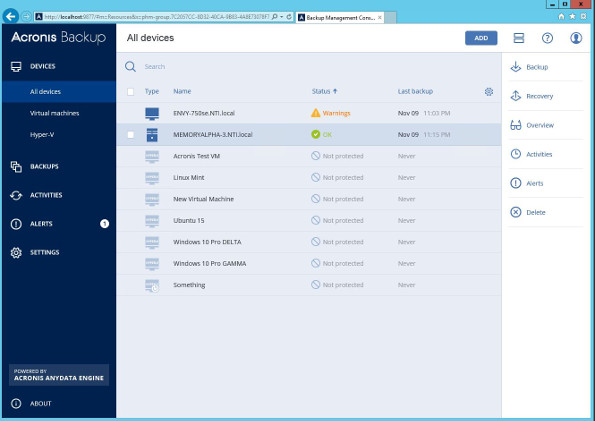 Acronis Backup 12 supports a wide variety of operating systems (myriad versions of Windows, Mac and Linux) on physical machines as well as virtual machines running on either VMWare or Hyper-V platforms. For an exhaustive list of Acronis Backup 12’s system requirements and what it supports, see page 4 of the datasheet.

During Acronis Backup 12’s initial setup, you choose between either an on-premise or cloud deployment. The main difference between the two is that the former requires you to install the management server on a Windows/Linux system on your network, while with the latter option, Acronis hosts the management server for you. You can do an on-premises deployment with either a subscription or perpetual license, while the cloud deployment is available only with a subscription.

We tested using the on-premises option, installing our management server on a Windows Server Essentials 2012 R2 system. After creating an administrator account and copying license keys into the console, we were able to set up backup plans for networked devices in just a handful of clicks, specifying what, where, and when to back up, along with additional options including how long to retain backups and whether or not to encrypt them.

As far as speed goes, Acronis Backup 12 got our backups done in a reasonable amount of time. We were able to do a complete initial backup of our Windows 2012 server containing over 4 TB of data to a USB 3.0 hard disk in a bit over 6.5 hours, while subsequent daily backups were completed in 20 minutes or less. We were also able to back up a 250 GB Windows 10 client over a Gigabit Ethernet network in just over an hour.

As a side note, Acronis Backup 12 supports backing up Android or iOS mobile devices. We didn’t test it, but it’s worth mentioning that mobile backup is available only when you are using the cloud deployment option. Also, the backups aren’t soup-to-nuts; they cover basic stuff like contacts, photos, and videos, but also leave out important items such as text messages on iOS and reminders on Android.

When you need to restore from your backups, Acronis Backup 12 gives you several ways to do it. You can recover from individual files and folders or restore an image of an entire system. For the latter scenario, the software lets you create bootable media (either CD, Flash Drive or network-based) and optionally add Acronis’ Universal Restore Tool with specific drivers that facilitate restoring an image to a system other than the one that was backed up, i.e. with different hardware. Although we successfully created and used the boot media to restore an image to original hardware, we weren’t able to test the Universal Restore Feature. 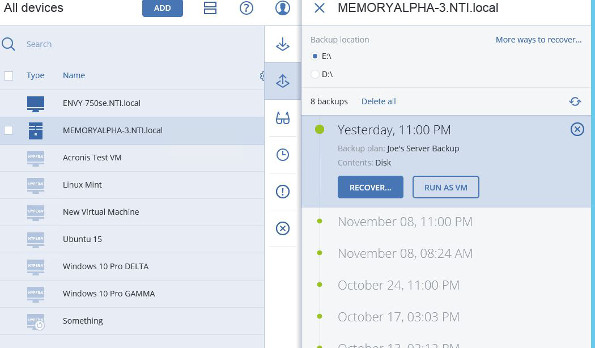 On a backup of a separate server (a Windows Small Business Server Standard 2011 which includes Microsoft Exchange), we were able to perform granular restores of individual mailboxes or messages.

A particularly neat feature of Acronis Backup 12 is its Instant Restore feature, which allows you to directly launch and run any backup as a virtual machine. This lets you get a failed system up and running quickly without first having to restore the backup to a new physical or virtual machine. We tried it using a Hyper-V host running on our network. Once we installed the appropriate agent for Hyper-V, we were able to selected a backup of interest, click a RUN AS VM button, and watch as Acronis Backup 12 generated a VM from that backup.

Acronis boasts that Instant Restore can have a system up and running in 15 seconds or less. Even though we waited a bit under three minutes for the VM of our Windows 10 system backup to be created, it was impressive and convenient nevertheless.

Acronis Backup 12 is costlier than most comparable backup tools. A perpetual license for a server will set you back three times more than one for CloudBerry Backup Ultimate, for example. But the value of the Instant Restore feature alone may help justify much of that price premium, and Acronis Backup 12 has an overall slickness and level of simplicity you don’t usually find in backup software.

Joseph Moran is a technology writer and IT consultant who specializes in services for consumers and small businesses. He’s written extensively for numerous print and online publications, and is the author of File Management Made Simple, Windows Edition from Apress.