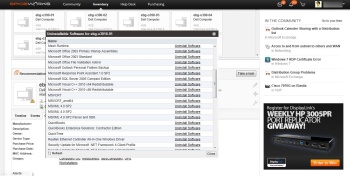 How many company computers have the accounting software installed? What’s the IP address of the second floor Ethernet switch? Which printers are out of toner/ink, and what color do they need? These are the kinds of questions small business network administrators need answers to every day, and Spiceworks‘ free network management and monitoring software makes answering such questions a lot easier—particularly for admins at small firms that lack the budget for powerful (but pricey) enterprise-centric management tools.

Spiceworks becomes more sophisticated with each new version, but the latest iteration, Version 7, received a major facelift, substantial under-the-hood tweaks, and an expanded repertoire of features that make it more useful than ever.

For those who may be unfamiliar with Spiceworks, let’s first address the obvious question, “How is this software free?” Answer: it’s subsidized by IT equipment and service vendors—and lots of them. As a result, Spiceworks contains countless ads, logos, links to white papers and case studies, etc., but not to the degree that it interferes with using the software. (If you’re new to Spiceworks, check out our Spiceworks 5 review for background info; there’s so much to cover in 7.1, that this review will necessarily focus on new and improved features.)

We installed Spiceworks version 7.1 (actually upgrading from v 6.2) on a small business network consisting of a couple of servers, approximately forty desktops and laptops (running Windows 7 Pro), more than a half-dozen shared printers, and myriad other networked devices including VoIP phones, all spread over two subnets in different physical locations about 100 miles apart.

Once we finished the upgrade, we took a look at the new features in Spiceworks 7.1.

For starters, the Spiceworks UI received a bit of a facelift with an increased use of graphics and animations. Despite this, the software feels considerably more responsive. Refreshing pages, changing views, or switching between different areas of the software don’t seem to take as long as they did in previous versions.

Figure 1: Spiceworks lets you remotely start/stop services or uninstall software, though the uninstall feature didn’t always work in our testing.

Spiceworks also overhauled the way it scans for and inventories devices. Rather than comprehensively scanning the entire network each and every time, Spiceworks now lets you schedule group scans so that you can poll critical devices and parameters more frequently than those that are less important.  For example, you might want to check a server’s connectivity or free disk space every few minutes, but check for newly installed software every few hours. Spiceworks still performs a full scan daily (nightly, actually), and you can add to or modify the default scanning schedules as needed.

Device inventory is smarter too. Previously, Spiceworks considered a device inventoried even if it knew little more than an IP address and perhaps a name. Now, Spiceworks flags these “unknowns” for extra attention, and lets you manually identify the device (assuming you know what it is). When you haven’t a clue (a more likely scenario), Spiceworks helps you deduce an identity by telling you which ports are, or are not, responding. It also lets you use basic IP tools such as ping, nslookup, and traceroute without having to drop out to a command prompt.

Resolving these problematic devices requires a lot more work upfront, but it also means fewer superficial entries in your inventory. On our Spiceworks wish list: provide a link to a MAC address OUI database to identify device manufacturers. (Several of our mystery devices had an OUI of 50:2e:5c, which led us to determine that they were HTC smartphones.)