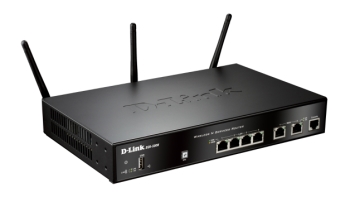 It takes quite a bit of networking to get a new office up and running. To be clear, we’re not talking about making the rounds at a tradeshow, polishing your elevator pitch, or bulking up your LinkedIn connections (though these are certainly all worthwhile activities).

Rather, we mean actual networking, the kind that lets your office’s technology devices communicate with each other and with the world. Read on for a rundown on what you need to consider when setting up a small business network from scratch.

A solid Internet connection is the cornerstone of any small business office, and depending on your location you may have several options from which to choose. For most small offices, the local cable or phone company ISP (Internet Service Provider) is a good place to start, because they generally offers speedy cable modem or DSL connections for $100 a month or less.

Routers such as the D-Link DSR-500N provide more features than devices typically provided by an ISP.

Cable modems almost always provide a speedier connection than DSL, and rejoice if you’re in one of the handful of geographic areas where you can get Verizon’s FiOS, because it puts both cable and DSL to shame.

Be sure to specify a business-class rather than a consumer level account—the former costs a bit more, but typically offers better reliability and customer support.

It always pays to get the fastest Internet connection your budget allows, but that’s particularly true if you plan on hosting your company data in the cloud (i.e. distant online storage) rather than a local server.

Buy Your Own Router/Firewall

Both DSL and cable ISPs frequently provide their own access hardware that combines the functions of a modem, router, firewall, switch, and Wi-Fi access point into a single device. Although they can be suitable for basic needs in small offices, replacing it with your own device provides you with a lot more features and flexibility.

For example, devices such as the D-Link DSR-500N include WAN failover, which can give you a redundant Internet connection (provided you establish accounts with two ISPs). Others such as Watchguard’s XTM Series devices offer add-on modules that can do things such as filter Web content, block spam and viruses, and prevent sensitive data from leaving your organization.

Before you occupy an office space, it’s crucial to evaluate its Ethernet data cabling. Although Wi-Fi—which we’ll discuss below—is an excellent supplement to Ethernet, it’s seldom an adequate substitute. If there’s any existing cabling in place, make sure it’s not the older CAT 3-type; the wire jacket, which is accessible where the cable emerges from the wall, will indicate the cabling type.

Compact, inexpensive switche,s such as the Netgear GS-105, let you connect multiple devices to a single Ethernet wall jack. However, if you’re wiring anyway, it pays to put more than one jack in each location.

Speaking of Gigabit, since virtually all modern desktops, notebooks, and servers support it and the cost of Gigabit Ethernet switches (the devices that provide additional ports to expand your network) is not much higher than for 100 Mbps Ethernet switches, in most cases it will make sense to go with Gigabit.

Another feature to strongly consider when selecting switches is PoE (Power over Ethernet), which eliminates the need for certain devices, such as IP Phones,  video cameras, and Wi-Fi access points, to obtain power from an AC wall outlet.

And whether you wire your office space from scratch or just add to existing cabling, it’s a good idea to run at least two cables to each location. Running multiple cables from point A to point B costs only nominally more than running one cable; and it’s good to have the extra ports handy for future expansion. (You could also expand single Ethernet ports into several through the use of small desktop switches such as the Netgear GS 105, but that can get messy.