How to Track and Manage Smartphone Data Use 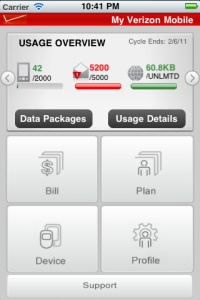 Not too long ago, smartphones routinely came with unlimited Internet access via the carrier’s mobile data network. That’s no longer the case, as most carriers have now abandoned all-you-can-eat data plans in favor of metered plans that give your smartphone a limited amount of data transfer per month.

Exceed that limit, and you can expect extra fees on your next bill for any excess data transfer, or else find your smartphone’s Internet connection temporarily “throttled” (i.e. slowed down to a small fraction of its normal speed) until the start of the next billing period.

Figure 1: Carrier apps such as My Verizon Mobile can tell you how much overall data you’ve used so far in the month, though the figure isn’t always current.

Whether you’re in the market for a smartphone or already own one, there are three strategies to avoiding — or at least minimizing — the unpleasantness of extra fees and connection slowdowns.

Just as you consider phone availability, network coverage or customer service reputation when choosing a carrier, it’s important to have a clear understanding of how much data transfer a carrier gives you and at what cost, as well as what happens if and when you go over your limit.

Comparing data plans between carriers — or even figuring out how much of a given carrier’s total monthly bill is for data (as opposed to, say, voice minutes or text messaging) — isn’t always obvious. That’s due mainly to variations in plan type bundles or promotions, but here’s a rundown of the monthly smartphone data plan offerings and overage policies for the four major national carriers:

As you can see, overage charges can be significant, and you should also keep in mind that they apply to fractions of extra usage too, so for example, if you use 2.2 GB on Verizon’s plan, you’ll get hit for an extra ten bucks just the same as if you had used 3 GB.

Speaking of knowing how much smartphone data you’re going to use, you can get a (very) rough estimate by consulting data calculators that will quiz you about how heavily you’ll use your phone for various activities such as media streaming, Web browsing, and social networking. They’re offered by AT&T , T-Mobile, and Verizon.

Joseph Moran
Previous articleStudy Looks at How SMBs Use Mobile Applications
Next articleWhat’s In Your Small Business Mobile Environment?