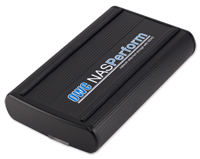 You can never have enough closet space, but hard drive space is rapidly becoming abundant. What’s more, you rarely need to even crack open your computer anymore to add space, thanks to the plethora of plug-and-play external hard disks.

External hard disks usually come in two primary flavors — direct-connect drives that use either USB 2.0 or Firewire plugged into a host computer, or network attached storage (NAS), which uses Ethernet to plug into a LAN switch.

A direct-connect drive offers the advantage of low cost and instant access — there’s nothing to configure or install, assuming any recent operating system. A NAS drive is easier to share, since it is accessible via the network, and offers more sophisticated access controls such as user privileges, but with flexibility comes more complicated setup. Both are reasonably portable.

With NASPerform, Other World Computing introduces a twist on both the direct-connect and NAS style of external disk, promising some of the advantages of each. NASPerform uses a technology called NDAS, or “network direct attached storage,” a system developed by storage vendor Ximeta to support networked storage without traditional networking complexity.

A slim, black, slightly rounded box, the NASPerform can sit either flat or stand upright nestled in its included cradle. On its rear are three connections — Ethernet, USB, power — and an on/off switch. The front features an LED that glows one of several colors depending on phase of operation.

You can use NASPerform in one of two ways — as a traditional direct-access disk using the USB connection, or as network storage using the Ethernet jack. But the first time you use it, you must initialize the hard drive using the direct-connect USB mode.

If you plan to use the NASPerform in a Windows-only network, OWC recommends formatting the hard disk with the NTFS file system. But if you use it with a Mac, either exclusively or in a network with Windows PCs, you must use the FAT32 file system. Unfortunately, FAT32 supports only a maximum file size of 4GB, which might be insufficient for large files such as media. (NTFS does not limit file size.)

Once you’ve partitioned and formatted the drive, you can remove the USB cable and connect the Ethernet. NASPerform can be plugged into a 10/100Mbps switch, either standalone or integrated into a wired or wireless router (but consult OWC’s list of incompatible routers). It cannot be plugged into a hub (a switch is superior to a hub anyway), nor does it support gigabit speed.

NDAS vs. NAS
A traditional NAS device is basically a TCP/IP appliance and therefore may require configuration to behave on the network. NDAS avoids the need for network configuration because it does not use TCP/IP, and instead relies on a proprietary driver running on each client computer.

For a machine to see the NASPerform on the network, first install the included driver software. Vista users should be sure to download the latest drivers from OWC’s Web site, as the version included on the CD (at press time) lack Vista support. Once installed, you must “register” the NASPerform with the software by entering a serial number found on the chassis. You can also enter a “write” code that allows the drive to be mounted in read/write mode — without this code, you can mount the drive in read mode only.

Compared to a true NAS device, NDAS does not support the concept of “shares” or user privilege levels, and isn’t accessible over the network using any standard protocols like Samba or Windows file sharing. But NDAS’ simplicity allows it to be offered at a lower price point than true NAS, as well.

Once the driver software is installed, you can mount or dismount the NASPerform from that particular machine. When mounted, any partitions on the NASPerform appear like regular drives in the operating system.

A word of warning: When used with Macs, only one Mac can have write access to the NASPerform at a time. You need to manually adjust the OWC software on each Mac to assure this. In a Windows network, all Windows machines can maintain read/write access simultaneously.

Pondering Portability and Performance
External storage is valuable to some people because it’s portable — easy to carry from one site to another and quick to hook up. As an NDAS device, the NASPerform is limited in portability because it requires drivers to be installed on any connected PC. But because OWC has outfit the NASPerform with a USB 2.0 connector, it can overcome this limitation and enjoy the same degree of portability as any typical external disk.

A typical 7,200RPM hard drive installed inside a modern PC will typically read data at a rate of about 50MB/sec, although this can be much improved on in high-performance configurations. By their nature, external drives are limited by the interface between the drive and the computer. The NASPerform offers two interfaces — USB and network — with very different results.

Connected directly by USB 2.0, the NASPerform achieves an average read rate of about 32MB/sec. It’s not surprising that we see some speed loss relative to an internal hard disk, which enjoys a much faster interface with the computer.

But when connected by 100Mbps Ethernet, the NASPerform achieves just 10MB/sec — over a third slower than by USB. In fact, the NASPerform is doing the best it can — a 100Mbps network can, at most, push data at a maximum of about 12MB/sec. Nonetheless, it’s worth noting that external storage on a 100Mbps network is nearly 1/5 the speed of an internal disk and 1/3 the speed of a USB (or Firewire) connection.

The remedy to slow network storage would be support for gigabit networking, which, when paired with appropriate networking gear elsewhere in the network, would provide more than enough bandwidth for the hard drive to reach its maximum speed.

NDAS Reconsidered
The NDAS technology built into the NASPerform serves a purpose, but with limited appeal. Compared to a true NAS device on a typical network, it involves only marginally simpler setup, with the need for specialized drivers to be installed on each client. Plus, the drivers on all clients must always be in sync with the same version. Multiple Mac clients cannot simultaneously write to the drive, and they must rely on the more limited FAT32 file system.

A true NAS device would indeed carry a higher price tag than the NASPerform, but without any of the above limitations, and with the ability to be shared by standard, built-in protocols, with varying degrees of user access control.

Without gigabit support, any network storage — whether NDAS or NAS — is hobbled in speed. Of course, you could partially overcome these limitations by connecting the NASPerform via USB 2.0 to a PC on a gigabit network, and sharing the NASPerform’s disk using your file system’s built-in sharing features. You’d get faster speeds from other network clients using standard protocols, optionally implement access controls, and remove other limitations like lack of simultaneous writing from Macs.

Then again, if you did all of the above, you wouldn’t need an NDAS device at all — just garden-variety external USB storage.