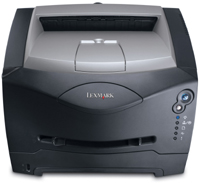 You might not love technology, but it’s easy to develop an infatuation when you get more and pay less. That’s the case with black-and-white laser printers. Prices keep dropping while the print quality and feature list keep improving. Case in point: both Brother and Lexmark offer quality business-class laser printers — the HL-5140 and the E323, respectively — that hover near the $200 mark.

Brother’s HL-5140 sells for $229.99, right alongside Lexmark’s $199.99 E232. Price isn’t the only measure that has these two machines running neck and neck. Both print an initial page in less than 10 seconds at 2400 dots-per-inch (dpi). The Lexmark edges ahead in speed, with 22 pages-per-minute (ppm) as compared to the Brother’s 20 ppm, but we defy you to notice the difference in real life.

Setting the Tone
When it comes to ease-of-use, replacing the toner has always been a pain-in-the-printer — or at least it has in the past. This newer generation of machines simplifies the process considerably. With the Lexmark, a flashing light indicates that the toner needs changing. Push a button to access the cartridge, and then pull it out by the handle. Give the new cartridge a shake, and push it in until it clicks. Mission accomplished.

Brother’s model requires a few extra steps. The cartridge sits within a “drum unit” that you have to pull out in order to access the cartridge, and it comes with dire warnings: “Make sure you fit the toner cartridge properly, or it may separate from the drum unit.” This type of process is exactly why we have always hated changing the toner. On the plus side, we found Brother’s step-by-step instructions online in under a minute. Depending on where you shop, toner prices for both printers cost about the same — $60 to $80.

Both machines support the full range of Windows, Mac and Unix operating systems and can be configured as part of a network. Both include 16MB of memory, but Brother gets the edge here for supporting memory expansion up to 144 MB — as compared to just 80MB for Lexmark. It may not matter in the short run, but for a fast-growing small business, the ability to add extra memory could prove helpful over time.

It’s easy to find the extra memory for the HL-5140 online. Prices run from $35 for 32MB to $55 for 128MB. Memory for the Lexmark is less readily available: We didn’t find any online vendors with stock on hand.

A little aside here: although the pricier models above are listed on Lexmark’s Web site, the E232 is not — the company sells it only through retail and not on its own site. This seems unnecessarily confusing, and it’s no help at all to a small business owner who wants to see what’s new from Lexmark — including the economy models — by exploring the site.

As office aesthetics go, we lean ever so slightly toward the Lexmark E232, a sleek black box with an appealing curve to its forward styling as opposed to the HL-5140’s white, somewhat boxier printer. Given the otherwise nearly identical specs of the two machines, appearance might well be the deal-breaker in this case.

For many small-business owners, though, the deciding factor will be service. Both manufacturers have extensive online information — an appealing perk for SMB buyers. That said, Brother’s online support is better organized and easier to access.

No matter which printer you choose, small business owners come out ahead. As the price of technology continues to drop, the laser-printer quality that once was out of reach is now an affordable option for even the smallest enterprise.

Adam Stone writes extensively on business and technology issues. He makes his virtual residence at [email protected] and his physical home in Annapolis, Md.