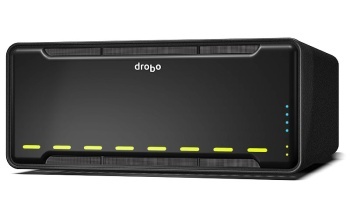 The Drobo B800i is positioned as an easy-to-use and high-performance SAN storage for small and mid-sized businesses.  Though the company gained fame for its prosumer range of direct attached storage devices, the Drobo B800i is designated as a solid business-grade device and certified for use in a multi-host environment.

The product’s basic specifications include:

Note that the two gigabit Ethernet ports do not support link aggregation, a technology for combining two ports into one.

You install the Drobo B800i using the supplied USB cable and the Drobo Dashboard software.  The software comes in a bundled CD with the latest version downloadable from the Drobo Support page.  Once installed, the Drobo Dashboard automatically recognizes and initializes a new Drobo device that is connected via USB.  You may want to configure an IP address and set an administrative password at this stage.  You can hook up the B800i to a standard Ethernet network once you configure an IP address, though Drobo recommends a direct connection for better performance.

We were impressed by the presence of an installation card that clearly outlines the steps to setup the Drobo B800i.  However, we were briefly stumped when we tried to connect to the Drobo using an Ethernet cable and the Drobo Dashboard failed to detect the storage array.  A quick flip through the bundled manual showed us where we went wrong: USB is the only option when connecting to the Drobo for the very first time.  This is ultimately a minor matter — as long as administrators remember to bring along the USB cable when setting up new Drobo appliances.

Available for Windows and the Mac OS X, the Drobo Dashboard acts as a single pane of glass for accessing and administrating multiple Drobo Prosumer and Business products from a single tool.  Based on our observations, the software constantly monitors the network to determine the presence of Drobo storage devices, displaying detected appliances and their storage capacities as an icon (or list).

You can select individual devices to view more detailed information or for the purpose of configuring it. Note that you can set an administrative password to protect the Drobo against unwanted modifications.

Below is a partial list of the tasks supported by the Drobo Dashboard:

It is important to remember that the Drobo B800i is really an iSCSI SAN storage device, not a Network Attached Storage (NAS).  Designed to serve as an iSCSI target for servers or as a storage device for power users, the Drobo B800i simply doesn’t come with capabilities one would associate with a modern NAS appliance.  So don’t expect to find frills such as Active Directory support, or built-in services like FTP and web servers here.

Overall, the Drobo Dashboard performed seamlessly in our testing; it automatically discovered and mounted data volumes whenever we restarted or connected our test rig to the same LAN.