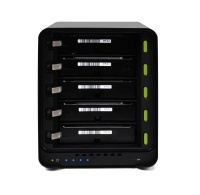 When it debuted several years ago, Data Robotics’ Drobo storage appliance gave small business owners the ability to easily set up a large, redundant pool of storage and to grow it down the road without regard for the manufacturer, rotational speed or capacity of the individual hard drives. But until recently, Drobo was available only with direct-connect interfaces — USB, FireWire, or eSATA. If you wanted to use it as a network storage device, it required an add-on module for network use.

Now, the $699, five-drive bay Drobo FS sports built-in Gigabit Ethernet for shared data access to Windows, Mac, or Linux computers, which means that networked RAID 1 and RAID 5 has never been so easy. A quick RAID primer — RAID 1 protects data by creating an exact duplicate copy of it, while RAID 5 essentially creates a shorthand version that you can use to fully reconstitute the original data.


How the Drobo FS NAS Works

Data Robotics calls its data protection technology BeyondRAID, and it involves a combination of both RAID 1 and RAID 5. Exactly how the Drobo FS organizes and protects stored data depends on the number and raw capacity of the disks you use (which ultimately determines the amount of usable storage you wind up with — more on this later). The upshot: because you don’t have to concern yourself with things like drive capacity and performance, you can create and expand your storage using the most convenient combination of disks available at a given time.

Storage devices seem to traffic on their sleek and stylish looks as much as their capability, but the Drobo FS eschews the emphasis on aesthetics with a simple black metal chassis about the size of a two-slice toaster. On the front you’ll find an array of indicator lights and, on the back, the Gigabit Ethernet port. What you won’t find anywhere are USB ports, which means that unlike many NAS devices, the Drobo FS doesn’t support walk-up sharing of, say flash drives, or of non-storage devices like printers or webcams.

Popping off the front panel (which is affixed magnetically) reveals the Drobo’s five drive bays, each of which can accommodate a standard 3.5″ SATA/SATA II hard drive. Drives simply slide into the Drobo without the need for trays or tools, though it can be a bit of a tight fit and require a bit of elbow grease.

To get the Drobo FS up and running, we filled four of its bays (with three 1 TB drives and one 250 GB drive), powered it up, and proceeded to run the Drobo Dashboard utility (included for Windows and Mac) which is required to locate and configure the unit. Upon finding our Drobo FS, the Drobo Dashboard software proceeded to download and install the unit’s most current firmware, as well as an update for the Dashboard software itself.

It’s disappointing that the Drobo FS doesn’t support browser-based configuration, as it means you must install Drobo Dashboard on every computer on which you may want to change, or even view the Drobo’s configuration.

Each time you run Drobo Dashboard, it prominently displays a large pie chart detailing your device’s used/free storage space. From our drive quartet’s raw capacity of 3.25 TB, the Drobo FS set aside space for data protection, expansion and system overhead; this left us with a tick more than 2 TB of usable storage (2.04 TB, to be exact). By comparison, were you to fill the Drobo’s five bays with 2 TB drives –which are currently as big as hard drives currently come — the combined 10 TB would translate into about 7.25 TB of usable space. Check out this capacity calculator to determine the Drobo’s capacity with a given combination of drives.

Drobo Dashboard puts forth a rather short and straightforward set of configurable options. For starters, you can create user accounts and shared folders and assign read access to the former and read/write access to the latter.

On the other hand, you can’t organize your users into groups, and the software doesn’t automatically set up a personal folder for a user when you create a new account, both of which can make setting up folders and permissions for a large number of users somewhat cumbersome.

From the Dashboard program, you can shut down, restart or reset your Drobo FS back to its factory-fresh condition, spin down its drives for power savings after a certain amount of idle time (or not spin them down at all), and opt to receive email alerts for important/critical system events. The Drobo Dashboard software can also display pop-up system messages while it’s running, and in Windows, conveniently map shared folders to drive letters in one mouse click.