Acer Unveils a Tough Chromebook & a Liquid-Cooled 2-in-1 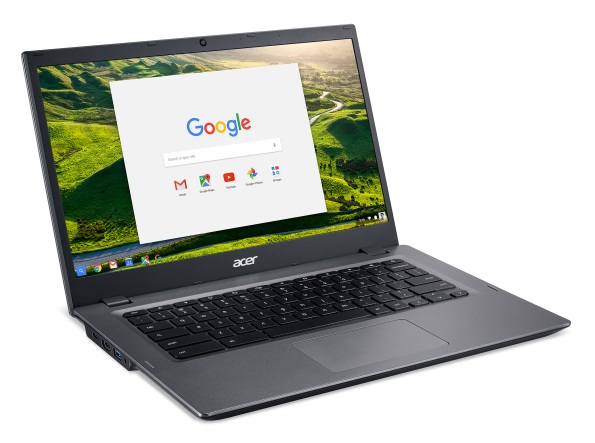 Sometimes turning 40 can precipitate an existential crisis. Not so for Acer, a company due to hit that milestone on August 1. Kicking off an early celebration, the Taiwanese electronics company gathered the tech media in New York City for an event on April 21 to show off its new products.

Acer took the wraps off of two new business mobile devices. While not as flashy as its other debutante, the Xplova X5 video-recording portable for cyclists and VR-ready gaming PCs, the business-oriented offerings warrant the attention of small business owners, particularly those who have adopted Google’s Web-based business app ecosystem.

Acer Designs a Chromebook for Work

Acer’s new Chromebook 14 for Work is the first Chromebook to feature a sixth-generation Intel Core “Skylake” processor for brisk performance. How brisk? The company claims it’s the fastest Chromebook available. The Chromebook 14 also features Vibrant Gorilla Glass, the latest version of the hardened, scratch-resistant glass from Corning. And this business-focused Chromebook is not completely without style. You can customize Gorilla glass with photo-realistic images, lending the device an added touch of personalization.

The hardware perfectly complements Google’s suite of Apps for Work cloud applications while offering business-grade manageability. On a full charge, it can run for up to 12 hours (10 hours on full-HD models). In practically every other respect, Acer’s new Chromebook looks like a sleek modern notebook. But looks are deceiving.

The rugged Chromebook 14 for Work meet the U.S. MIL-STD 810G military standard for computing devices, which means that it can take the punishment doled out in the battlefield. Acer, the leading Chromebook maker, commanded 33 percent of the Chromebook market last year. Eric Ackerson, senior product marketing and brand manager for Acer, explained what prompted the company to add those rugged measures to its business devices.

The Acer Chromebook 14 for Work

“One reason we took that route is due to our success in the education sector,” said Ackerson on stage. “We purposely designed products to be durable for the rigors of being used by children in that environment.”

Chromebook 14 for Work has been tested to survive a four-foot drop, and it can withstand up to 132 pounds of downward force. It spill-resistant keyboard can handle up to 11 fluid ounces, courtesy of a gutter system that channels liquids away from internal components.

Acer Chromebook 14 for Work goes on sale in May. Prices start at $349.

A Quiet, Liquid-Cooled 2-in-1 Tablet PC

If you prefer a Windows notebook over a Chromebook, Acer debuted a new 2-in-1 notebook that borrows a trick that high-performance PCs use to prevent a meltdown.

As its name suggests, the new Switch Alpha 12 Detachable PC is a tablet PC with a 12-inch touchscreen (2,160 pixels by 1,440 pixels) and a detachable keyboard. This design lets you “switch” between tablet and laptop modes. Unlike Surface Pro tablets from Microsoft, Acer includes the keyboard as part of the Switch’s standard package (an optional backlit keyboard is also available). 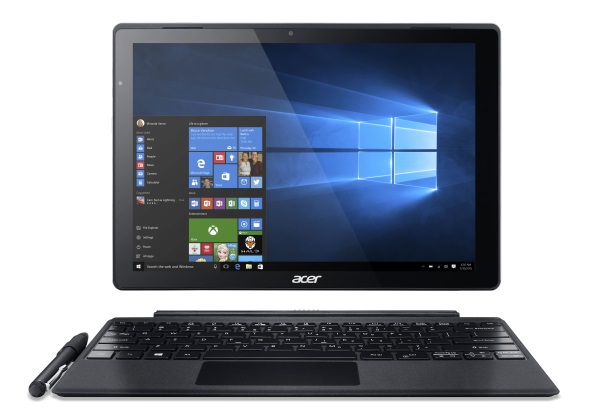 Here’s where things get a little interesting. Switch Alpha is the first fan-less 2-in-1 notebook powered by sixth-generation Intel Core processor (i3, i5 and i7 models available), according to the company. Acer accomplished this fan-free feat with a new cooling system called LiquidLoop.

“When the coolant passes through the loop, over the CPU, the expanding gas pushes the coolant back around the circuit,” explained an Acer spokesperson. “We don’t need a giant radiator, pump, or any of the large components typically found in water-cooled systems”—components that obviously wouldn’t fit in a portable, he added.

The innovation lets you run Windows 10 applications at full tilt—minus the annoying whir of a fan. This on a device that’s slightly more than a third of an inch thick, or 0.62 inches with the keyboard attached.