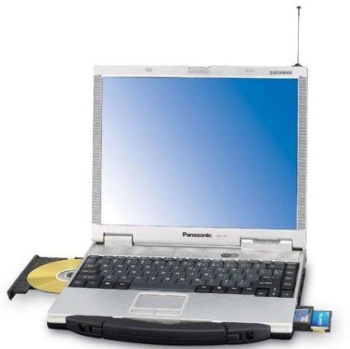 The world seems to be shrinking around us &#151 the world of high tech, at least. Every new gadget is yet smaller than the last. This race toward miniaturization gives us powerful computers that are also light and portable and worthy of our love.

But our micro-sized gadgets also intensify risk. Potentially thousands of dollars of equipment dangle mere inches away from sudden tragedy &#151 dropped and shattered into a million little pieces, crushed in a moment of forgetfulness or drowned in a flood of coffee.

Brawny Books
Panasonic has carved out a specialty niche in the portable notebook computer market with its Toughbook series. The original Toughbooks targeted the most perilous environments &#151 military field use, for example. These “fully ruggedized” notebooks are put through a battery of abuse and required to meet “mil-spec” standards &#151 for altitude, temperate extremes, rain and dust, compression and impact.

In recent generations, Panasonic has extended its Toughbook line to include “semi-rugged” and “business-rugged” models. These machines inherit some of the brawnier qualities of their full-blown ruggedized lineage but with sleeker lines and lighter weights.

Semi-Rugged CF-74
Panasonic designed the semi-rugged CF-74 (street prices starting at $3,000) especially for highly mobile computing in a variety of environments. Examples might include salespeople who travel extensively, builders who take their notebook to job sites, or anyone else who needs their computer both in the office and in the field.

You might say that the CF-74 is a modern notebook outfitted with light body armor. That armor begins with its full magnesium alloy case. The slightly coarse, silver armor is lightweight and strong &#151 not easily nicked and rated by Panasonic to protect the valuable machine on ground impact from falls of up to one foot.

A collapsible carry handle made of thick plastic is integrated into the case at the front of the machine. With the clamshell CF-74 snapped closed, you can quickly grab the handle and securely carry the CF-74 as if it were a light briefcase. A typical notebook may be easy to carry packed away in a case, but when you need the flexibility to move often from room to room or indoors to outdoors, the Toughbook’s built-in handle is brilliantly useful.

The unit’s removable, shock-mounted 80GB hard disk is rated to survive falls up to three feet &#151 so even if the machine is damaged, your data still stands a chance for recovery. Coffee klutzes can relax around the CF-74, too &#151 the machine, including the keyboard, is rated to resist up to 4 ounces of liquid spills. Panasonic puts its semi-rugged CF-74 through a battery of tests including 50,000 hinge cycles and 5 million keyboard strokes.

In contrast to typical notebooks, which typically situate the usual array of ports and connectors along the sides, the CF-74’s ports are inset behind fully closable plastic shields. This trade-off against convenience and quick access helps keep only necessary connectors exposed to the elements. Only the headphone and microphone jacks, located along the front side of the unit behind the handle, remain exposed.

Light, Bright and Roaming
Besides its armor, the CF-74’s other enhanced outdoor and travel features include a bright screen that’s readable in daylight. In comparison to an older Thinkpad unit, the difference is striking &#151 on a bright day in the car, the Thinkpad screen is barely visible even at its brightest setting. The CF-74 screen, while slightly dimmer than when indoors, remained comfortably usable. Its 13.3-inch size and 1024×768 resolution is modest by today’s standards, but keeps the unit’s weight below 6 pounds and saves on energy consumption.

Although the CF-74 is not a tablet PC, the display is touch-sensitive. You can press it lightly with the tip of a finger or use the included stylus, which tucks away on the left side of the case. With either method, its sensitivity performed accurately.

Panasonic has squeezed impressive battery life out of the CF-74, besting many of today’s voraciously power-hungry notebooks. Another benefit for use on the road, the CF-74 battery is rated to last between six to eight hours. Of course, running energy-demanding applications like wireless networking and DVD playback will draw down the battery more quickly.

In our test with the 801.11 (Wi-Fi) wireless network enabled, cellular EV-DO WAN enabled and the display set to full brightness without any power saving features in use, the notebook still managed nearly six hours of battery life.

You can optionally outfit the CF-74 with an integrated WAN module ($500+) for access to cellular data networks from Cingular, Sprint or Verizon. Our test unit included the Verizon EV-DO receiver, providing Internet access from virtually anywhere a Verizon signal is available. Outside of high-speed EV-DO regions, the receiver delivers up to 144kbps download and upload speed; within EV-DO regions (typically major metro areas) the receiver delivered 600-900kbps download and 100-150kbps upload speeds, even in a moving car at 70 (uh, 55) MPH.

Extra Security
Even an armored laptop can be vulnerable to data breaches, especially when it’s moved between places frequently. Besides the standard cable lock slot, the CF-74 also includes a TPM, or Trusted Platform Module. This hardware chip provides data encryption services to supporting software, such as the upcoming Windows Vista.

You can also purchase optional fingerprint scanner and optional smart card reader for an additional $150+ each.

It’s a Computer, Too
Of course, behind all the brawn and portability, the CF-74 is a notebook computer. Specifically, it is built around the Intel Core Duo processor. The original CF-74 includes the 1.83 GHz T2400 Core Duo while newer models have been bumped up to the 2.0 GHz T2500.

While other manufacturers now offer the newer Core 2 Duo in their latest models, published benchmarks show the performance difference between it and the Core Duo at less than 10 percent for most applications. As the name implies, the Core Duo is a dual-core processor, which is like having two processors in one, and it’s especially useful when multi-tasking several applications or encoding media.

The base CF-74 includes 512MB DDR2 667MHz memory installed in one of the two upgradeable memory slots. The notebook supports up to 4GB of total memory. An integrated combo 8x DVD-ROM/24x CDRW drive comes standard, and you can upgrade it to a DVD burner ($500+).

Aside from the optional WAN module for cellular data, the CF-74 includes an integrated Intel PRO/Wireless 3945 supporting A/B/G Wi-Fi networks and a Marvell Yukon gigabit Ethernet LAN jack for wired networks. You can also opt for integrated Bluetooth ($130).

Expansion slots on the CF-74 include one PC Card slot supporting Type 1 or Type 2 cards, one SD (Secure Digital) card slot, and one Express Card slot. Two USB 2.0 slots, a standard 15-pin VGA out, a 9-pin serial port, 56K modem and a mini-port replicator round out the CF-74’s integrated connectors.

Look and Feel
Because the CF-74 is a semi-rugged notebook aimed at mobile business users, its overall appearance is less bulky and less “militaristic” than their fully-rugged machines. Its silver-toned alloy case is sleek but somewhat boxy, by necessity, compared to ultra-lithe but fragile competitors.

The CF-74 ships with Windows XP Professional. As touchpads go, the CF-74’s is accurate and its sensitivity adjustable. Using the built-in drivers you can configure hot spots on the touch pad to perform special actions, like middle-click or scroll. Typical left and right buttons are aligned side-by-side below the touchpad.

The CF-74 sports an impressive keyboard, a quality oft neglected by notebook manufacturers. The keyboard feel is solid and there is no flex in the unit. Some people may need to adjust to the unusually narrow space bar.

Although the CF-74 includes built-in Sigmatel two-channel audio and the Intel GMA950 video accelerator, this is no gaming rig. The GMA950 offers very good 2D but only adequate 3D capabilities. The integrated loudspeakers are on the tinny side and offer limited maximum volume, especially in noisy environments.

Niche Value
A product like the Toughbook CF-74 is designed for customers who really need it. At over $3,000 equipped, the CF-74 costs more than twice that of alternative major brand notebooks built around the same processor, with more memory, disk space, larger screens and multimedia features. But would you want to take any of those to a construction site? Or toss them in a car trunk a dozen times a day?

You don’t buy a notebook like the CF-74 for watching movies or playing the latest games or even breaking benchmarking records. You buy it because you need it &#151 because you need a computer that won’t sit on a desk all day, because it does not need to be handled like a soft-boiled egg, and because it packs gobs of battery life for long sessions far from the nearest power outlet.

Aaron Weiss a technology writer, screenwriter and Web development consultant who spends his free time
stacking wood for the winter in Upstate New York. His Web site is: bordella.com