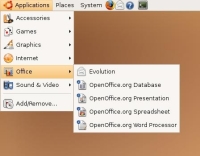 In 2007 alone Ubuntu released two successive versions of its desktop Linux, 7.04 a.k.a, “Feisty Fawn” and 7.10 a.k.a., “Gutsy Gibbon.” Although Ubuntu’s penchant for tagging its releases with goofy animal names might lend the product an air of frivolity, in fact Ubuntu is so popular for a reason: it is the easiest distribution for people to setup and use out-of-the-box (or “off-the-CD” in this case). Although not designed to precisely emulate Windows, per se, Ubuntu’s visual interface is familiar enough that newcomers can get up to speed and be productive quickly.

Both releases have introduced landmark features that have helped transform Linux from an enthusiast’s operating system to a viable OS suitable for general-purpose use.

Feisty, for example, brought about point-and-click installation for so-called “restricted” media formats and device drivers. Traditionally, many Linux operating systems have not included proprietary software components. Unfortunately, this has meant people couldn’t enjoy expected features like playing MP3 or DVD content and accelerated video drivers to popular graphics cards by ATI and NVidia. By bridging this gap, Feisty helps meet customer expectations, although it has rankled the feathers of some Linux purists.

With Gutsy, Ubuntu closed the gap further between desktop Linux and proprietary operating systems like Windows and Mac OS X with the introduction of 3D desktop support (akin to Vista’s Aero), integrated system search (like the Mac’s Spotlight), and application-level security called AppArmor.

For many small businesses, interoperability with Windows systems is important. Ubuntu can run Web and file servers, and it share files with Windows machines. However, these features are not configured out-of-the-box. You have to do it yourself.

To clear up potential confusion, it helps to understand that there are two branches to the SUSE Linux Desktop tree: Novell SUSE Linux Enterprise Desktop, or SLED, is a commercial product sold for $50 per desktop with a one-year subscription to patches and upgrades. In contrast, OpenSUSE is Novell’s community-developed desktop Linux, which shares a significant amount in common with SLED, but can be downloaded for free.

At the time of writing, the current release of SLED is 10 SP1 while the current release of OpenSUSE is 10.3. Generally, leading-edge features found in SLED show up in OpenSUSE at a later date. For example, the “slab” menu introduced in SLED 10.0 which very neatly organizes installed applications into functional categories migrated to the free OpenSUSE only in version 10.3, released more than a year after SLED.

Today, many consider the free OpenSUSE 10.3 on par with commercial SLED 10 SP1, but small businesses should remember that a SLED license includes the yearlong subscription to Novell.

Distribution confusion aside, SUSE desktops are designed to “play well with Windows” straight out of the box. SUSE desktops can authenticate via Active Directory, run Novell GroupWise, Lotus Notes and connect to Domino and Exchange servers. While these same features can be added to other Linux distributions like Ubuntu, doing so takes expertise, which is why SUSE has positioned itself as the business-friendly Linux desktop.

In a first among Linux vendors – and to the horror of some – Novell and Microsoft announced in 2007 a formal partnership to further interoperate, potentially giving SLED an edge in environments where integration with Windows platforms is essential.

A Deep Bench
While Ubuntu and SLED are today’s dominant desktop Linux products, they are far from alone. Red Hat, long an established name in the enterprise Linux server market, has come to the desktop with Red Hat Enterprise Linux Desktop 5, its answer to Novell SLED. Red Hat is emphasizing virtualization (also supported in SLED and Ubuntu to varying degrees) as a way for desktop clients to run multiple operating systems side-by-side. Like Novell, Red Hat also supports a free, community-based desktop Linux spin-off of its enterprise product, named Fedora.

Of the businesses that do deploy Linux, “most employ it in conjunction with other network operating systems,” according to Justin Jaffe, senior research analyst at IDC. “SMBs typically engage in a selective Linux deployment rather than a comprehensive operating system migration.” While virtualization is one way to bridge the compatibility gap between Linux and Windows, another is emulation.

Xandros Desktop Professional not only connects to Windows Active Directory and PDC services, it also features a desktop designed to resemble Windows XP. Xandros also includes Crossover Office, an emulation product that can install and run many Windows productivity applications directly inside Linux, including Office and Outlook.

Linux Off the Shelf
Some people argue that Microsoft Windows is so popular because most PCs come with Windows already installed. Until Linux enjoys the same opportunity, they say, the competition is weighted in Microsoft’s favor.

In 2007, desktop Linux gained some modest ground in PC vendor catalogs. The biggest announcement of the year was Dell’s decision to offer two PC models with Ubuntu pre-loaded rather than Windows. The $499 Desktop 530N and $749 Notebook 1420N both include Ubuntu 7.04.

Not to be outdone, Lenovo, maker of the business-favorite ThinkPad notebooks, followed Dell by announcing that T-series models would be available with SLED 10 pre-installed in late 2007.

Even Wal-Mart has joined the act, selling out of the $199 Everex gPC that runs its own lower-end version of desktop Linux.

All that said, the impact that pre-loaded Linux machines have had so far in the market could be described as throwing a pebble into a lake. “Desktop Linux is growing, albeit very slowly,” said Gary Chen, senior analyst at the Yankee Group, “but since Dell got into desktop Linux the growth has not accelerated.” Dell itself has yet to release official sales figures.

Price, Security and Vista
People who market Linux no doubt hope to leverage three of Microsoft’s perceived main weaknesses. One is price: desktop Linux can be acquired and installed for as little as zero dollars, potentially very attractive to a small business with more than one or two machines. While no operating system if perfectly secure, the bombardment of malware that has driven up the cost of maintaining Windows PCs has not yet hit the Linux desktop with any significant force. And then there’s Vista. Both cost and performance concerns surrounding Vista have encumbered the new operating system with an air of uncertainty. So many businesses have expressed reluctance to jump into Vista that vendors who had previously pulled support for Windows XP have had to re-introduce it.


All of which has bred some hostility against Microsoft, said Jaffe at IDC. “An anti-Microsoft sentiment is most prevalent among small businesses (and one of their top five reasons for positive interest in Linux).” Added Gary Chen, “Some people haven’t gotten to the decision point about their desktops yet.  But when they do, I think that a lot more of them will at least consider Linux.”

But will motivation translate into action? So far, the numbers are small. “Of the roughly 8.3 million small businesses in the U.S., less than two percent currently use any particular Linux environment on a desktop,” Jaffe noted.

Although 2007 has been a good year for desktop Linux, “good” has to be kept in perspective. “Growth continues and Linux has made a lot of good progressions, but nothing earth-shaking market impact-wise,” said Chen. “If desktop Linux is successful, it will be a long slow growth process.”

The stage has been set and the technology is ready, but will people show up to the party? It may take 2008 or longer to find out.

Aaron Weiss a technology writer, screenwriter and Web development consultant who spends his free time stacking wood for the winter in Upstate New York. His Web site is: bordella.com