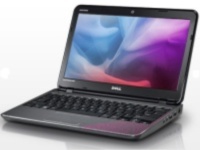 Do you find traditional “slim-and-light” or even “ultraportable” notebook computers — machines with 13- or 14-inch screens — too big and clunky to cart around? And do you also think under-sized netbooks are too under-powered for your needs? If that describes your taste in notebook PCs, then the new Dell Inspiron M101Z laptop, which falls somewhere in between, may be just the ticket.

In configurations priced from $549, the M101Z comes with an AMD Athlon II Neo K325 processor, a 1.3GHz dual-core chip, along with 4GB of DDR3 memory and a hard drive up to 325GB. The default operating system is Windows 7 Home Premium.

A Tiny but Powerful Notebook PC

That’s considerably more power than the typical netbook with its single-core Intel Atom processor, 1 or 2GB of memory and Windows 7 Starter Edition. (There is a less expensive version of the M101Z with a single-core chip, however.)

The high-end M101Z may not deliver enough to satisfy a true power user, but it should be plenty for most multi-tasking small business employees. And despite the un-netbook-like computing muscle, the M101Z is almost the same size as a netbook.

The M101Z doesn’t stint on connectivity either. It has everything you’d expect from larger, more expensive laptops, including integrated networking: Wi-Fi 11N wireless, Bluetooth 3.0, Ethernet. There are three USB ports — USB 2.0 only, though, not the much faster new USB 3.0, but not many computers have USB 3.0 ports yet.

The M101Z even has both an analog VGA port for connecting an external monitor, and an HDMI (High-Definition Multimedia Interface) port that lets you make an all-digital connection to an HD television. That’s more than can be said for some larger, more expensive notebook PCs that have one or the other but not both.

HDMI ports were only found on fairly high-end laptops until recently. Even if you don’t think you need or want to connect your computer to a TV, it’s a useful feature to have because some modern computer monitors also have HDMI ports, or you can use an adapter to go from HDMI on the laptop to the DVI (Digital Visual Interface) port on a monitor. It makes an all-digital connection that delivers a better image than VGA.

And even if you don’t need it now, the HDMI-to-HDTV connection could be a boon down the road if you find yourself in a client’s boardroom and want to wow him with your company’s HD video.

Working Without a DVD

What the M101Z lacks, of course, is an optical drive, as is the case with most netbooks. For some potential buyers, certainly any in the market for a laptop to use as their only small business computer, this may be a deal breaker. There is no way to play DVD movies, and no easy way to install programs from CDs or DVDs.

However, many programs are available as downloads. And you can put a program CD in another computer and use Windows 7 to transfer an ‘image’ — a complete identical copy — of what’s on the CD to a USB flash drive. Then put the flash drive in your M101Z and install the program from it as if it were a CD or DVD.

For video entertainment between sales calls, you can always stream from the Web or download from a site that sells or rents videos, such as Apple’s iTunes. Or transfer videos from your TiVo.

Dell lists battery life as “up to” six hours and 36 minutes with the standard-issue 6-cell 56WHr Li-Ion battery. It may last that long if you turn the screen brightness way down and press a keyboard key every five minutes.

In our testing, starting from a full battery and running video continuously until the computer shut down because of a low battery, it lasted about three hours and 25 minutes. That’s not bad. It means you can do a little work and then watch a movie before the battery gives up the ghost. But it’s not as good as some higher-end laptops. (There is an optional 9-cell 90WHr Li-Ion battery, which we did not test.)

Despite what the Dell literature says, the keyboard is not full size — it’s about 11.25 inches diagonally, compared to 12 inches for the non-number-pad array on my desktop keyboard. But I’m a touch typist with not particularly slender digits, and I had no trouble typing accurately on the Chiclet-style keys. (Most of this review was written on the M101Z.)

The Synaptics TouchPad allows scrolling — sliding your finger up and down the right side of the pad to scroll vertically, sliding it across the bottom to scroll horizontally.

This is an important feature if you’re going to use the computer a lot without a plug-in mouse. But for some reason the feature isn’t activated by default, and there are no graphics on the pad, as on many, to indicate scrolling areas. I had to go into advanced settings under Mouse in the Control Panel to find and turn it on.

The M101Z performed at least as well as, and often better than, my two-year old Dell XPS M1330, an Intel-based dual-core machine that at the time was the non plus ultra of ultralight laptops from Dell. And the older M1330 outweighs the M101Z by more than a pound.

I applied special effects filters in Adobe Photoshop CS5 on large image files (40-50MB). The M101Z completed the tasks faster than the M1330 — and faster than my quad-core desktop computer for that matter. (Mind you, the M101Z’s hard drive and registry aren’t cluttered with the detritus of several months of computing as is the case with the other computers.)

While the M101Z does not run as cool as, say, an iPad, or many larger-format or lower-powered laptops, it does run cooler than the M1330, a notoriously hot-running computer that leaves second-degree burns after prolonged lap-computing sessions. The M101Z vents out the left side – you don’t want to hold your hand there for long — and is never unbearably hot on the bottom.

The media bells and whistles are nothing to write home about, as you might expect in a tiny, relatively inexpensive computer. They include a built-in 1.3-million pixel webcam and microphone, which are fine for casual Skype video chats. The ‘surround sound’ speakers couldn’t surround a matchbox and with their tinny sound.

If you’ve considered a netbook but couldn’t afford to take the performance hit, the M101Z may be the ideal compromise. It’s almost as small and light as a typical netbook, but packs as much power as many larger, heavier laptops.

Gerry Blackwell is a freelance technology writer based in London, Canada. Read his blog, AfterByte