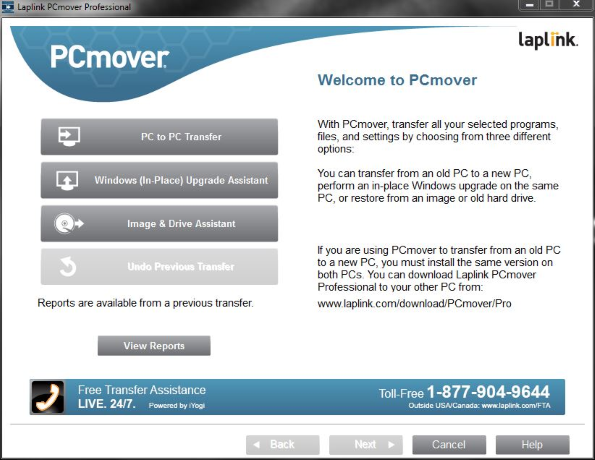 We understand your dilemma. You’ve been using Windows 7 for years, and you won’t touch Windows 8.x with a 10-foot pole. But now that Windows 10 has arrived—much improved and sporting a more 7-esque way of doing things, you’re considering a switch. You haven’t pulled the trigger yet because the hassle involved in getting all the settings, files, and applications from one version of Windows to another makes you cringe.

PC Mover Professional can transfer settings, files, and applications from one PC to another or as part of a Windows upgrade on the same PC.

We’d like to report that PC Mover Professional only requires you to click a button and then go have a sandwich while it does its magic, but that’s not the case. Given the complexity and variables involved in this kind of transfer it’s all but impossible to automate the user out of the process entirely. 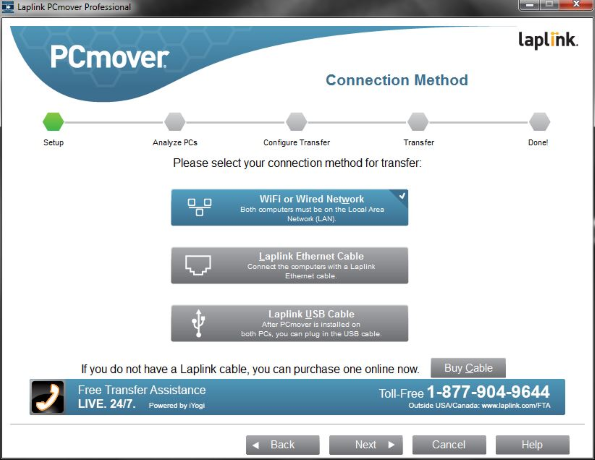 PC Mover Professional works over either wired or Wi-Fi LAN, or via a direct-connect cable.

You must run through an extensive pre-transfer checklist on both PCs, which includes things such as installing any available OS updates on the new PC and—on both PCs—running Scandisk to check for disk errors as well as disabling power-saving, antivirus software, etc.

You should be aware of some post-transfer caveats, including that some hardware drivers and applications may not transfer successfully. In some cases, you may need to may re-install and/or reactivate some applications if they employ anti-piracy measures. It’s a good idea to gather any necessary license keys before the transfer.

We ran PC Mover Professional on the old Windows 7 PC and chose to perform a PC-to-PC transfer over Wi-Fi (the program also supports a wired LAN). You can also opt to do a direct transfer via a “Laplink Ethernet Cable” (e.g., a crossover cable), and if you purchase the boxed software, the cable comes in the package. Another reason to consider the boxed software over download—as of this writing, you’ll save about $20.

PC Mover Professional conducted an extensive inventory of our old PC, which took about 15 minutes to complete, and then prompted us to install and run the software on the new PC. Unfortunately, our first half-dozen attempts to perform the transfer were unsuccessful, as the new PC stubbornly failed to detect the old PC on the network in spite of the fact that firewalls on both systems had been confirmed disabled and each could see each other via ping. 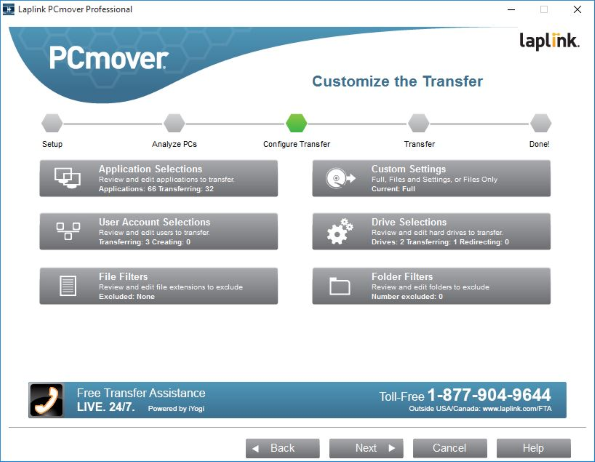 PC Mover Professional allows you to customize various aspects of the data transfer.

At this point we put the Laplink’s 24/7 assistance hotline to the test. The reps were friendly and competent, but we spent almost an hour of basic troubleshooting to no avail. They then offered the option to escalate our case for a fee (which we declined). Note that neither Laplink nor Microsoft provides the support; it’s provided by iYogi.

[Editorial Update 12/18/2015: Readers should note that iYogi is now the target of an investigation and lawsuit by the Washington State Attorney General.

Next we uninstalled the (McAfee) firewall from the new PC, and that’s when the new PC was finally able to communicate with the old PC over the network.

Chances are you don’t want to transfer absolutely everything from your old system. After collecting the inventory data from the old PC, PC Mover lets you review the transfer roster (on the new PC ) so you can exclude any items—users, apps, folders—you don’t need.

PC Mover automatically flags for transfer any apps that it deems are compatible with your new version of Windows (or are likely to be), but it excludes any that are known to be incompatible. Out of the 66 apps on our test system, PCMover deemed 34 ineligible for transfer, but the vast majority of those were vendor- or hardware-specific utilities (e.g. Dell or chipset-related) or programming runtime libraries (e.g. .NET, Visual C++).

When PC Mover began the actual transfer process, it indicated that it would transfer about 40 GB and that the process would take about three hours to complete. As it happens, the transfer process abruptly came to a premature halt about halfway through, citing a “connection error,” but when we started it up again it picked up right where it left off and ultimately completed successfully. 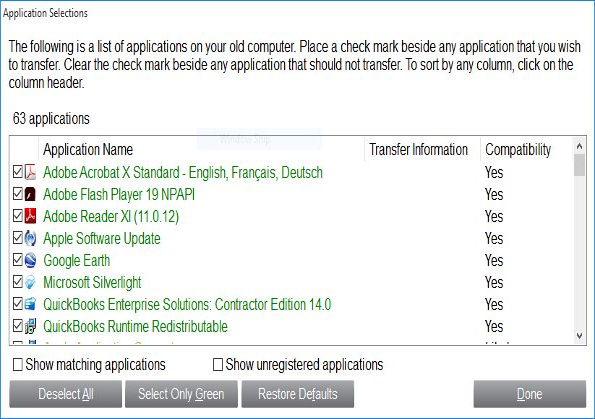 PC Mover Professional lets you know whether the apps on your old PC are compatible (or likely to be) with your new version of Windows, and it automatically excludes those that aren’t.

When the transfer completed, we rebooted the new PC (it was supposed to happen automatically, but we had to do it manually). The transferred files and apps were where they were supposed to be, and the apps ran successfully for the most part (we did need to re-register a few, per the earlier caveat). We had one anomaly. Our VPN utility (ShrewSoft) seemed to transfer properly with its configuration intact, but it could no longer establish a connection (reinstalling the utility fixed the problem).

We lost a few minor things in translation—items pinned to the Start menu and Taskbar on the old PC were no longer pinned to those locations on the new one, for example—but overall the new PC’s post-transfer condition and behavior was quite acceptable. In case you find the results of a transfer unsatisfactory, PC Mover provides an undo feature that lets you roll back the transfer. We tried it, and the new PC was as pristine as if it had just been unboxed.

PC Mover Professional also lets you transfer from one PC to another indirectly via an external hard disk (much like the Microsoft’s old Windows Easy Transfer utility), but you have to jump through some extra hoops. You’ll need a separate Laplink DiskImage utility to create an image on the old PC and then mount the image on the new computer so that PC Mover can read it.  On the plus side, PC Mover Professional includes Laplink DiskImage, so you don’t have to pay extra or download it separately.

We would be remiss if we didn’t also mention the existence of the related product PC Mover Express, which Microsoft and Laplink have partnered to make available for free until August 31, 2016. What’s the difference between the free product and the one that costs $60? Mainly that the free product’s license is restricted to personal rather than commercial use, it won’t work on a domain-joined PC, and it doesn’t transfer applications. The free version also offers (for what it’s worth) the same toll-free assistance hotline you get with the paid product.

Assuming you can avoid, transcend , or tolerate the PC-to-PC connection issues we encountered, PC Mover Professional will get your stuff over to a new version of Windows with a lot less time and effort than copying and reinstalling everything manually. Bottom line—if the anticipated pain is holding you back from moving to Windows 10, PC Mover Professional should prove an effective analgesic.

Joseph Moran is a technology writer and IT consultant who specializes in services for consumers and small businesses. He’s written extensively for numerous print and online publications, and is the author of File Management Made Simple, Windows Edition from Apress.