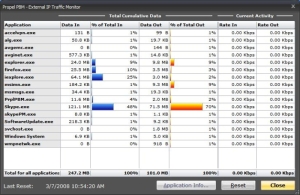 Internet bandwidth is always a finite resource, and that’s especially true of upstream connections, where speeds typically range anywhere from 1/3 to 1/12 that of downloads. And when limited Internet connection bandwidth isn’t used efficiently, you can experience performance problems for certain kinds of applications – like VoIP – that rely on speedy data delivery.

Enter Propel Personal Bandwidth Manager, a $29.95 Windows utility (XP-compatible only at the moment, though a Vista version is in beta testing and due out soon) that makes two promises. The first is to keep you informed about how your Internet connection’s bandwidth is being used—i.e., which applications are using it, and how much.

The second is to automatically manage the data flowing into and out of that Internet connection so that time-sensitive applications like streaming media and VoIP applications receive priority over less critical tasks like file transfers, in order to avoid slow video playback and garbled voice communication.

Although it has a few problems, Propel PBM seems to make good on both promises. We say “seems” because the payoff on the second promise may be tough to gauge in many situations.

Setup
Before putting PBM on our XP-based Dell notebook PC — connected to an 802.11g network via its built-in wireless network adapter– we went to Speedtest.net to get a reading on the system’s connection speed. The site consistently reported a downstream speed of about 4,250 Kbps (4.2 Mbps) and an upload speed around 360 Kbps via our Comcast cable modem.

Installing PBM is a simple matter since you don’t have to configure anything — at least not usually. After ascertaining the speed of your PC’s Internet connection, the software decides on its own how to manage the available bandwidth. According to PBM, our Dell’s connection speed was only 2,620 Kbps downstream (and the same 360 Kbps up).

Another check at Speedtest correlated with PBM’s findings, but when we disabled PBM, Speedtest’s performance figures returned to the pre-installation levels. Propel says that PBM can misidentify connection speed in certain instances, and it provides the ability to override the automatically detected settings when this happens. We did that so the PBM figures would be in agreement with the Speedtest download figures.

Eye in the Sky
We like PBM’s Traffic Monitor feature, which is so named because it provides a big-picture look at how you’re using your Internet connection. Easily accessed through a desktop system tray icon, the Traffic Monitor reports how much data each application is currently sending and receiving, and it also records cumulative data–expressed in both absolute (megabytes) or relative (percent) terms—so you can see which of your applications are the biggest bandwidth hogs over time.

Because the application names displayed by the Traffic Monitor are the same cryptic labels you usually see in the Windows Task Manager’s Processes tab, an Application Info button provides more detail on a highlighted application. The database of info must be pretty sparse, however, because more often than not we found the button offered no additional information. Each info window does provide a link to a Google search of the application name to fall back on.

Traffic Manager has other minor usability issues, too. For starters, the display window lacks the “Always on Top” option (like you get with Windows Task Manager), so if there’s limited screen real estate — as was the case with our notebook—application windows are constantly overlapping Traffic Monitor while you’re trying to read it. Also, Traffic Monitor wipes away cumulative data with every system reboot, which obviously limits how far back the data will go, and likely it’s historical usefulness as well.