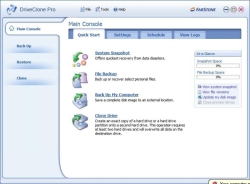 Few things can put a business at greater risk than the failure to conduct frequent data and/or system backups. Most backup utilities approach the task from one of two angles– some concentrate on protecting data by backing up files and folders, while others emphasize complete system protection and employ disk imaging to create an exact replica of a hard drive encompassing data, applications, the operating system and everything in between.

Because there is merit to each approach, FarStone‘s DriveClone 3 Pro handles both, offering a single application that can safeguard everything from individual files to folders, disk partitions to entire hard drives.

Installation
DriveClone 3 Pro ($49.99 for a one individual) works with Windows Vista, XP or 2000 operating systems (OS). When you install the software it sets up a user-sizable secure area on your system’s boot hard drive, a hidden partition that’s used for storing some backup data. The fact that the partition is inaccessible through the OS’s file system keeps it from being damaged by viruses or other kinds of malware. The secure area also lets DriveClone install a Pre-OS environment that can be accessed before Windows loads, simplifying recovery in situations when something prevents Windows from loading properly. Although you can adjust the size of the secure area post-install, it’s a destructive process that will erase all the data stored there.

While installing DriveClone 3 Pro, we found that opting for the default “typical” installation leaves out several key features (including the aforementioned Pre-OS environment) You can obtain those by opting for the “advanced” install. FarStone says it chose this setup for compatibility reasons (mainly with systems using RAID devices), and that in a future update, the wizard will perform a compatibility check, allowing the typical installation to safely include all product features.

Drive Imaging and File/Folder Backup
When your computer has a systemic problem or suffers from a something like a total hard drive failure, the quickest and most expedient path to recovery is to restore the system from an image file since it saves the considerable effort of having to re-install the operating system and applications prior to restoring data.

To this end, DriveClone 3 Pro can create an image of your entire hard drive (or of individual disk partitions within it) and save it to either a network location, external hard drive, or to a bootable DVD disc (more likely upward of a half-dozen or more given their limited capacity– dual-layer DVDs aren’t supported). DriveClone 3 Pro can also update your drive image with incremental changes anywhere from daily to weekly.

To access and recover system images stored on network or external drives, you can create a start-up CD/DVD from which to boot your system. If you want to upgrade a system’s hard drive by replacing it with a larger version you’ll appreciate DriveClone’s ability to, well — clone a hard disk or disk partition directly to another disk (both drives must be attached to the system at the same time).

Of course, data loss doesn’t have to be catastrophic to be serious, so you can also use DriveClone 3 to perform conventional backups of key data folders, including ones you specify. DriveClone 3 will also perform scheduled incremental updates of file backups and can retain multiple versions of each saved file, which is useful when your woes are due to an imprudently modified file rather than an erased one.

We were mostly successful in our attempts to use DriveClone 3 Pro to create and restore different kinds of backups on a pair of systems running XP Professional and Vista Business. On one of them, however– a recent-vintage HP notebook — the start-up CD repeatedly hung, preventing us from accessing a saved image on an external drive.

System Snapshots
DriveClone 3 Pro’s System Snapshot feature is based on the same idea behind the System Restore feature built into Windows, which periodically makes copies of critical system files and settings so that in the event something unexpectedly damages your configuration (say, an application or hardware driver installation gone haywire) the damage can be undone and your system restored to an earlier working state.

Because System Restore exists within the OS, most backup utilities don’t bother with a snapshot feature, but DriveClone’s version offers several potential benefits over what you get with Windows. Perhaps most importantly, snapshots are saved in DriveClone 3 Pro’s secure area, which means you can access them from the Pre-OS environment when Windows has been rendered belly-up.

Another major difference is that System Snapshot makes a copy of all files, and not just a handful of the most important ones, as does System Restore. This makes it more likely that a snapshot restore will have the desired curative effect, but there is a downside in that the snapshot will also roll back your data files to their earlier incarnations, which in most cases won’t be what you want. A future program update will offer the option of excluding data files from a snapshot restore. For now all you can do is preview the contents of a snapshot files in order to do a selective restore, but that’s of limited value since you typically don’t know specifically what you’re trying to restore.

DriveClone 3 Pro is available for a 30-day free trial, and the software’s $49.99 single-user price tag drops when you purchase the software for two-, three- or five-system license packs. The multi-license options in particular compare favorably to competitive products like Acronis TrueImage.

For the most part DriveClone 3 Pro does what it promises and is a good value for what it offers, but the installation routine and some of the features could benefit from more refinement. The upcoming update improvements will help a lot, but in the meantime, DriveClone 3 Pro is worth checking out for anyone looking for soup-to-nuts data protection.