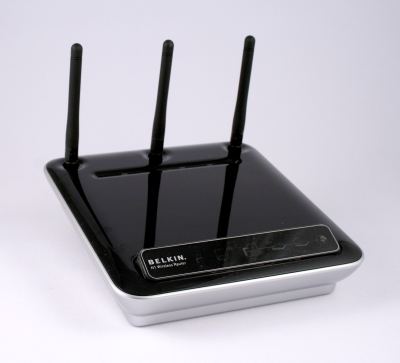 Belkin, one of the first companies to ship a “Draft-N” product, has also introduced a new look for wireless routers with the Belkin N1 Wireless Router F5D8231-4. Rather than a design that could be mounted vertically or horizontally, the N1 is clearly designed to sit horizontally. It features a sleek new glossy black plastic top case with an attractive metallic-looking case bottom. Its three vertical antennas sprout out of the top of the case. Belkin also broke ranks with traditional wireless routers with its new information status panel.

Most wireless routers have LEDs to show activity on the Internet and LAN ports, and possibly a status light to indicate wireless activity or clients connected. The Belkin N1 status panel does away with individual port activity lights and replaces them with a series of indicators that show you the status of your network — an approach that may appeal to less technically inclined customers.

For setup, Belkin relies on a combination of a quick start guide and a CD-based wizard. The quick start guide instructs you on how to connect the cables, and the CD-based wizard walks you through the basic router configuration. The 10/100 LAN ports on the N1 are color-coded gray and the Internet port is yellow. Belkin thoughtfully supplied a yellow Ethernet cable to connect between the Internet port and your cable/DSL router. Of course, experienced networkers can just log into the router’s Web-based interface and configure it manually.


Interestingly, the Belkin N1 will display the router status page without requiring a login. However, to change any of the settings requires an administrator password.

The LAN setup menu lets you configure the IP address range for your LAN and configure the DHCP server. The DHCP server can be configured for lease times ranging from a half hour to forever. We were surprised that the default was forever. Typically, you want the DHCP lease to expire so that you can reclaim IP addresses for future use, but in a home office environment, it really doesn’t matter. Unlike some competing routers, the N1 does not support DHCP reservation — again, probably not a big deal in a typical home office.

The Internet WAN menu allows you to set up your Internet connection. By default, it’s set to acquire both an IP address and DNS settings from the ISP. For most home users, the default setting will work, but the N1 supports static IP addresses and PPPoE.

The Wireless menu lets you configure wireless settings such as SSID (network name) operating channel, operating mode (only one choice of 802.11n/802.11g/802.11b), bandwidth, SSID broadcast and protected mode. The wireless security options on the N1 are more complete than on the NetGear 854T RangeMax. The N1 supports not only WPA/WPA2 in PSK (Pre-shared Key) mode, it also supports WPA/WPA2 using an external RADIUS server.

Belkin also includes a feature not found in many consumer wireless routers — the ability to use it as an access point. If you select this option, the N1’s routing and firewall features are disabled. This is a nice feature, since access points, even though they’re simpler devices than routers, typically cost more. And with RADIUS support for wireless security, the N1 could be a cost effective low-end enterprise AP with Draft-N support.

The firewall features on the N1 are fairly basic, but adequate for most home consumers with the exception of serious gamers. The virtual server list is pre-populated with 140 entries that cover most common services. However, the N1 doesn’t support application triggering — a feature needed by some gamers. If you plan to combine work and play, you may need to look elsewhere. It does have rudimentary IP client filters (five entries) that you can schedule. The N1 supports DDNS (Dynamic Domain Name Service), but only has support for one vendor (DYNDNS.org). A DMZ configuration page and a rudimentary log (that you can’t e-mail) round out the firewall offerings.


The Utilities menu lets you reboot the router, restore it to factory settings and save/restore your router settings. The firmware update page has an icon that lets you check the Belkin site for firmware updates. Since the N1 is based on evolving technology and vendors are frequently updating drivers and firmware to offer better performance and interoperability, it’s a good idea to check for firmware upgrades often. During the time that I tested the N1, I updated the firmware in the device twice, and each time yielded better wireless performance.


The Belkin cards come with nice wireless client software that can replace Windows Zero Config. The software has a user-friendly tabbed interface that shows nearby networks, signal strength, security and operating channels. It also shows the status of your connection to the router, as well as the router’s connection to the Internet.

Performance
In our testing, we streamed data between two notebooks with the F5D8011 client cards installed. Both the router and the cards were updated with the latest firmware available.

We tested in a typical home environment. Before testing, we did a site survey and discovered five nearby wireless networks, including one with 100 percent signal strength on channel 11. To minimize interference, were-configured the Belkin N1 to operate on channel 1.

We created four test scenarios, and for each one, we ran performance tests a number of times. The results below are the average throughput for each test scenario.

Overall, these test results were disappointing when compared to the D-Link RangeBooster N and the Netgear RangeMax products.


In the short distance test, the Belkin measured only 47.8 Mbps as compared to Netgear’s 93.7 Mps and DLink’s 62.8 Mbps. And in the Kitchen test — the most difficult place to reach in my condo, the Belkin measured 20.8 Mbps as compared to DLink’s 35.4 Mbps and Netgear’s 22.6 Mbps. Still, at least for our test space, it provided good coverage in all rooms.

Though we like the styling of the case and some of the included features, the reason you buy a Draft-N products is for performance. Unfortunately, the N1 doesn’t deliver the speed of its competitors.

Craig Ellison
Previous articleHosted Exchange for Anyone
Next articleExternal Storage: When One Disk Isn’t Enough