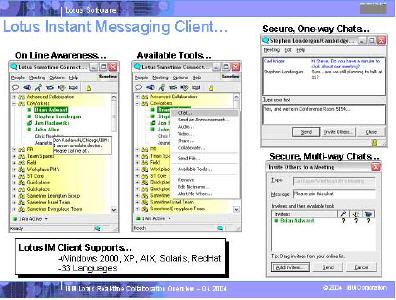 In the inner circles of the instant messaging (IM) industry, the conversation inevitably comes around to interoperability — that is, getting public networks such as AOL, Yahoo! and Microsoft as well as proprietary systems to share IMs. The thinking is that businesses need to reach beyond the boundaries of their firewalls to talk to customers, suppliers and partners. Discussions — often heated — about SIMPLE and XMPP, which are the technologies that drive that interoperability, abound.

In the world of Patricia Stibbs, administrator at the Plastic Surgery Center of Hampton Roads in Newport News, Virginia, the messaging needs are more internal and more pragmatic. With five surgeons and 50 support people serving between 600-700 patients in a facility that includes two operating rooms in a 14,000-square foot building, she was just looking to cut down on the use of the intercom system and eliminate piles of Post-Its notes used to track patients. “It was all very low-tech,” Stibbs said.

“With all the paging, it was beginning to sound like an airport. We are in the cosmetic surgery business, and patients are looking for ambience,” Stibbs said.

Of course, implementing Lotus Instant Messaging did more than make the Plastic Surgery Center a quieter place to work or visit. It helps employees better care for and keep track of patients. Whether it’s making certain a patient sees a counsellor before she schedules a procedure or that she sees billing before she leaves the office, it can all be communicated among workers in real-time without any speaker phones or the employee having to leave her desk. “It allows multitasking,” Stibbs said. “It sounds simple, but a lot things require a yes or no answer. It keeps everyone at her desk. They can deal with it immediately. There’s no getting lost.”

Not only does IM help keep employees productive and accounted for, it also provides a way for the Plastic Surgery Center to route patients. “It’s great for when you are looking for a patient. You can say ‘Tell me when Mary signs in.’ You can IM recovery to say Mary’s husband is here to take her home.” Or, she said, they can discreetly tell a doctor to call his wife. All types of information flows more freely.

A Little Help From Colorado

Stibbs credits Ascendant Technology with making the system work quickly and efficiently. “We had this idea for the sign-in thing and they made it happen.” That initial idea Stibbs mentions allows patients to sign in electronically, so in case the person at the reception desk is busy, others are alerted and can attend to the patient. It’s also reassuring for patients because they don’t need to wonder whether anyone knows they are there. Equally important, if a staff member needs to see a patient for any reason, they can find out as soon as she checks in.

For example, Stibbs said, “We have to track patients for an FDA study on silicone implants.” Basically, all cosmetic surgery practices are required to monitor the progress and health of the patients that have had implant surgery. “We are responsible for 350 people in the study,” Stibbs said. And if one of those 350 patients signs in, they want to make sure they seize the opportunity to do the followup at the moment because it can be months before they see that patient again. “IM can alert us that a patient we need to track is in the building.”

It was also important that implementing IM not be disruptive. After all, the practice couldn’t shut down while the transition was being made. “We stayed late at one night and it was working in the morning.” And it’s been working since. Even though, Ascendant Technology is based in Colorado, Stibbs said, they provide on-going support over the phone. “I’m not a programmer, but they can walk me through it.”

In terms of the staff reaction, the new messaging system was quickly accepted even though it was a huge change in process. “There was no reluctance, just a little trepidation,” Stibbs said. Now, though, the employees have fun with it. “But it’s not a deterrent to work at allm,” she said.

Keep Things Private
The electronic sign-in process not only makes the office move efficient by alerting the proper staff members when a client signs in, it also help the practice comply with recently enacted HIPAA laws governing patient privacy. If a visitor sees that a patient has signed on check-in sheet, it would violate HIPAA laws. “If you see someone in a waiting room, it is not a HIPAA violation. If someone sees your name on a sign-in sheet, it is a violation.”

“The burden of proof is on the practice. You have to prove you have taken precautionary measures.” Stibbs said. HIPAA also requires the practice to have a secure network, screens not accessible for public viewing, the use of screen savers. However, the company probably had “more privacy issues with PostIt notes in the trash,” she said.

The Plastic Surgery Center has no plans to extend IM beyond the building but Stibbs said the infrastructure is now place to implement technology such as electronic Medicaid forms. But, for now, Stibbs is happy with the more efficient form internal communications offered by Lotus Instant Messaging. “It’s great for when I’m stuck on the phone. I don’t have people waving notes in my face or tap dancing in front of me.”

Do you have a comment or question about this
article or other small business topics in general?
Speak out in the SmallBusinessComputing.com Forums.
Join the discussion today!
Facebook
Twitter
Linkedin
Email
Print