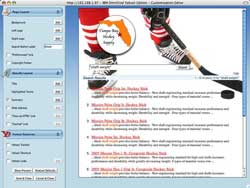 Providing an efficient search tool for your company’s Web site — whether it’s an intranet or a customer-facing one — is important to ensure that everyone can find what he or she is looking for. Of course, if you can provide that without having to spend any money, all the better.


That’s exactly what IBM and Yahoo teamed up to offer four months ago when it introduced IBM OmniFind Yahoo Edition.


IBM today introduced a new version of the free IBM OmniFind Yahoo Edition search software, which is designed to be more customizable than the previous version. It also adds support for more than a dozen new languages.


IBM OmniFind Yahoo Edition originally launched late in 2006 and since then has been downloaded more than 16,000 times, according to Aaron Brown, program director, Content Discovery and Search, IBM. The early customers, according to IBM, include manufacturers, consulting firms, financial services organizations, professional services organizations, universities, state and local governments and school districts.


The free, server-side software has helped generate interest in IBM’s enterprise-class OmniFind search products, Brown said, and IBM has no plans to move away from offering this version as a free product.


IBM OmniFind Yahoo Edition competes on the low-end of the enterprise search market with products such as the Google Mini — a search appliance that has a starting price of about $2,000. Brown credits Yahoo with developing an interface that helps it compete with products like Google’s.

Additional features in the new version of OmniFind Yahoo Edition are designed to help you build new custom search applications or add customized content. Brown said the upgrade also makes it easier to integrate search results into the look and feel of existing applications or to include content from a third-party content source.


“There’s another class of users who want to use it with other applications. We had a set of APIs, but you needed a developer to implement it,” Brown said. “Now it’s easier to embed [IBM OmniFind Yahoo Edition} in other applications.”


Brown said that the new version also allows for more advanced searches by using, for example, “author name” or other metadata to refine search results or to create more targeted searches on top of initial search results.


IBM OmniFind Yahoo Edition is also quicker to deploy, Brown said, because you have more control over crawling your site. For example, he said, you can set it to manually crawl after an update to the site. You can also incrementally index the pages, which lets you get search results before the search tool finishes crawling the site.