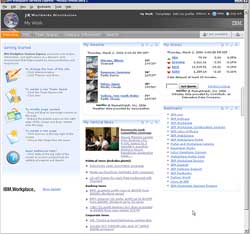 IBM doesn’t sell direct to small businesses, but you can purchase the product through one of Big Blue’s 750 business partners now qualified to offer the product. Loria said that many IBM partners add value to the portal software by customizing it for specific customers or vertical market. The company’s new IBM Workplace Designer 2.6 tool is designed to facilitate developing and deploying those applications.


IBM reports that businesses have downloaded more than 5,000 Workplace Services Express trial versions over the past nine months.


Are You in Compliance?
The headaches that come with meeting regulatory compliance requirements aren’t limited to only Fortune 1000 companies. Looking to address the needs of small and mid-sized companies that struggle with the cost and complexity of products designed to help with compliance, IBM yesterday announced IBM Workplace for Business Control and Reporting.


The new service is designed to ensure business integrity by putting the proper processes in place, Loria said. Without this type of product, “there’s no guarantee that data is accounted for,” he said.


To ease the installation, maintenance and management of the software, IBM Workplace for Business Control and Reporting is offered as a Web-based service available through IBM’s eBusiness Hosting Services. The Flexible Hosting Program for Workplace for Business Controls and Reporting is designed to have customers up and running the tools in as little as 48 hours, the company says.


IBM also announced a new test drive program to let you evaluate the application and hosting delivery of Workplace for Business Controls and Reporting before purchasing.


Spring Forward, Fall Back — With a Twist
IBM also today announced new software and services designed to help small businesses ensure that computer clocks are adjusted when the Energy Policy Act of 2005 goes into effect in 2007. The act calls for daylight savings time (DST) to begin two weeks earlier and end two weeks later than it does currently.


While the move may well save the country’s businesses money in reduced energy costs, it could wreak havoc with computer systems built to think DST begins the first Sunday in April. For that reason, next year companies will have to change PCs and applications that rely on internal clocks to schedule and execute tasks such as backing up data, distributing software, tracking transactions and updating Web sites.


“It’s not a difficult thing to fix, but if it’s ignored it can cause real damage,” said Luis Rodriguez, director of market management, IBM Tivoli software, in statement released today. “Small businesses are especially susceptible, since their IT staffs are typically very small and are more likely to be focused on the here and now, as opposed to something that’s a year away.”


The software and services, code-named “RightTime,” is designed to help companies automatically locate and download the software patches that activate the time switch, determine which PCs require them, install the patches, and then verify that all the PCs have them. IBM said it will provide this patch management capability through its Tivoli Configuration Manager and Tivoli Provisioning Manager products, which also handles security patches.