Free CRM for Your Business 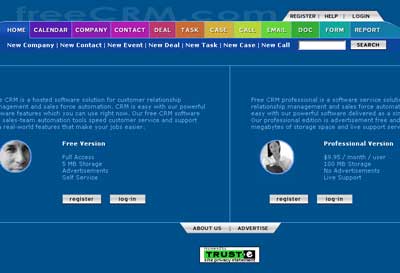 There may be no such thing as a free lunch, but, by golly, there is free customer relationship management (CRM) software.
You can sign up for the gratis service at FreeCRM.com, which was unveiled Wednesday. It’s not a trial or limited version. It’s an actual Web-based application designed for small businesses.

The catch is that after the first of the year you will have to put up with advertisements. For the rest of 2003, the site is ad-free while the San Francisco-based company that developed FreeCRM.com, builds up enough page views to attract advertising agencies, the company’s CEO Eric Stone said.

Stone said the targeted customers are small businesses of two to 100 people. “Other guys are going after the enterprise,” he said, referring to efforts by Salesforce.com, Salesnet and NetSuite to sell into the Fortune 1000. “I’m the polar opposite. I want the real estate agency down the street.”

You are limited to 5 MB of storage in your document repository (where you would store Word, PowerPoint or PDF files, for example), though you can enter an unlimited among of contacts. “You can have as many records as you want, you can have a million of them,” Stone said. FreeCRM.com lets you import data from Outlook, Act!, Gold Mine or other contact management and sales automation application.

The company reports that FreeCRM.com uses 128-bit SSL encryption to protect data. Stone said the FreeCRM.com is also certified by TRUSTe, a nonprofit organization that was established to ensure that personal information and identity is protected online. Stone said that the TRUSTe certification is crucial to his operation because many users are skeptical of a free service.

Adding to that skepticism is a rather extensive registration form that Stone said is necessary to help build aggregate demographics for advertising sales. Early users were also concerned about the safety of their contact files. “People were concerned that we were going to steal contact lists. We would never do that. That’s why we joined TRUSTe.”

FreeCRM.com is hardly the first Web-based business to try to make a go of it as a free, advertising-driven service. Stone maintains it’s a good business model, one he describes it as “tried and true.”

Perhaps, but the company isn’t betting that is can live by advertising alone — companies such as Intranets.com and FreeDrive would agree the free life is a difficult one. FreeCRM.com also offers a Professional Version for $9.95 per month. With that you get 100 MB of document storage, no advertisements and live support.

The company this summer also plans to offer “application devices” that customers can install behind their firewalls, Stone said. “Basically, we pack everything on a server and ship it to the customer.”

The application servers are “100 percent Linux and we use Dell as our hardware OEM,” Stone said. The price for a one CPU-based server is $9,995 and a two-CPU system is $14,995. CRM ASP can manage the server remotely or the customer can manage it and use CRM ASP for telephone support as needed.

CRM ASP is privately funded, Stone said, with 14 employees and offices in London as well as San Francisco. Whether the company succeeds remains to be seen, but you can’t say it never gave you anything.