Back It Up, Mac 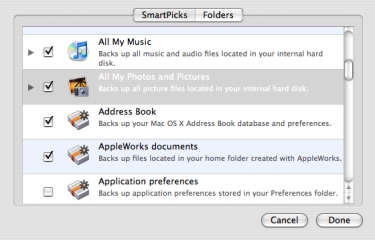 Anyone who owns a Mac has experienced the frustration of being treated like a second-class citizen when it comes to finding Mac versions of popular software. Most software vendors point to Windows’ larger market share as an excuse for not developing Mac titles, but others have started listening to their customers and delivering the goods.

Case in point, today Memeo announced LifeAgent, the Macintosh version of AutoBackup, its successful PC-based data backup software that launched two years ago. Over the past year, said Hong Bui, Memeo’s CEO, the number one request the company received from it customers was for a Mac-compatible version. “Many of our PC customers also own Macs,” Bui said. “We had so many requests for it, that we finally gave them what they wanted.”

Bui likened backing up your data to flossing your teeth. “Everyone knows it’s important and something they should do it, but only a small percent of them actually follow through.” Because of this tendency, Bui said it’s crucial that the backup process is seamless and effortless. LifeAgent is designed with a minimal, one-time setup and to run in the background, backing up your data as you work.

“Other products offer scheduling, but many people work fluidly in many different places,” Bui said. LifeAgent works when you work. It recognizes the important data and it can save multiple file versions.” For example, whenever you save a file, LifeAgent automatically backs up a copy of that version. That might happen once or twice with an image file, whereas you might save a Word document 30 times as you work on it.

Since it’s made for Mac, LifeAgent lets you backup Mac specific applications such as iTunes, iPhoto, iDVD, iMovie, Mac mail, calendar and PM data and Safari bookmarks and settings

Like its PC-platform sibling, LifeAgent is designed to let you back data up to any storage device – a USB flash drive, an external drive or a NAS box. LifeAgent also offers another way to save your data – online backup. This optional, fee-based feature is designed to let you back up critical data over the Internet and store it at three different offsite data centers throughout the country. Memeo outsources this function to two major online back up providers.

The LifeAgent software sells for $29.95 and Memeo also sells the software in three-packs for $69.95. The online backup is a fee-based add-on, and the price depends on the amount of space you need, as noted in the chart.

Memeo originally designed the original PC software for consumers, and yet Bui said it’s become very popular with small business. “Mainly because it’s very simple to use, and that appeals to small companies that don’t have an IT staff, he said. “They love it because it works.”